Why is it that the dead just can't seem to stay dead?

"Resident Evil 6," the latest game in Capcom's zombie-infested survival-horror franchise, is a lot of things: action-packed, explosive, intense, beautiful, thrilling, gruesome, and full of zombies waiting to be shot, decapitated, run over, smashed, exploded, or otherwise dealt with.

The one thing it doesn't feel like is a proper "Resident Evil" game.

But wait! Leon Kennedy, the star of "Resident Evil 4," still one of the best-reviewed games of all time, is back. That must mean something in terms of keeping the game's roots intact, right? It means something, but sadly, it isn't enough.

"Resident Evil 6" includes three main campaigns that span across three continents. Each campaign has its own protagonist: Leon Kennedy (starting off in America), Chris Redfield (Europe/China), and Jake Muller (Europe/China as well). As a new wave of the deadly C-virus starts to break out in each location, it's up to you to try to get to the bottom of who is involved and how best to stop the bio-terrorist threat led by the new and improved Neo-Umbrella corporation.

I had hoped that the three different campaigns would function like the different characters in Nintendo 3DS title, "Resident Evil Revelations," where each storyline would have a specific focus allowing both survival-horror and action-adventure levels to stand on their own. But after playing through Leon's first segment, I knew that his campaign was about as much survival horror as the game was going to give, and even that isn't saying a lot.

Things start off with a bang as Leon has to kill the president of the United States, newly infected with the C-virus. It's gripping, right? After running through a post-apocalyptic city, you soon travel through cemeteries and caves and catacombs, sure, but the city areas that often push you into groups of other survivors feel more like shoot-outs in "The Walking Dead" than the abandoned spaces usually found in "Resident Evil." Rarely, if ever, is there a fear of death or urgency; the game lacks any truly scary moments that will take you by surprise, or almost any kind of the puzzle solving we've come to expect.

And things only get worse from there. Chris's campaign plays out like any other shooting game you've probably already played in the past 10 years. You run around most of it with a squad of Bioterrorism Security Assessment Alliance soldiers, waiting for the AI to plant land mines or disable air-land turrets or fly planes or drive tanks, and all of those other war-time shooter things that you do in every other war-time shooter game.

Is it still fun? Sometimes. Will some people enjoy it? Sure. But having a whole team following you around just isn't very scary, or very "Resident Evil." It's just hard to be scared or worried when there's a whole group of people keeping you company (even if they do get picked off one by one) and, when zombies excuse me -- the J’avo -- have the ability to use guns, how is this any different from any other shooter now? It really isn't.

Jake (who I swear looks like the spawn of Eminem and Daniel Craig) has the more interesting of the campaigns, and at least mixes things up a bit. He's a new character that plays differently, since he's a martial-arts fighter and mercenary. And his campaign introduces the giant tank-like force that is Ustanak, a memorable recurring creature of destruction. The problem is that Jake's campaign also features the bulk of the vehicle driving (motorcycle, snow mobile, boat, etc.), which just feels out of place, and the constant cat-and-mouse with Ustanak does get a little tiresome. He's an unbeatable behemoth, we get it. So why do we keep trying to take him down? 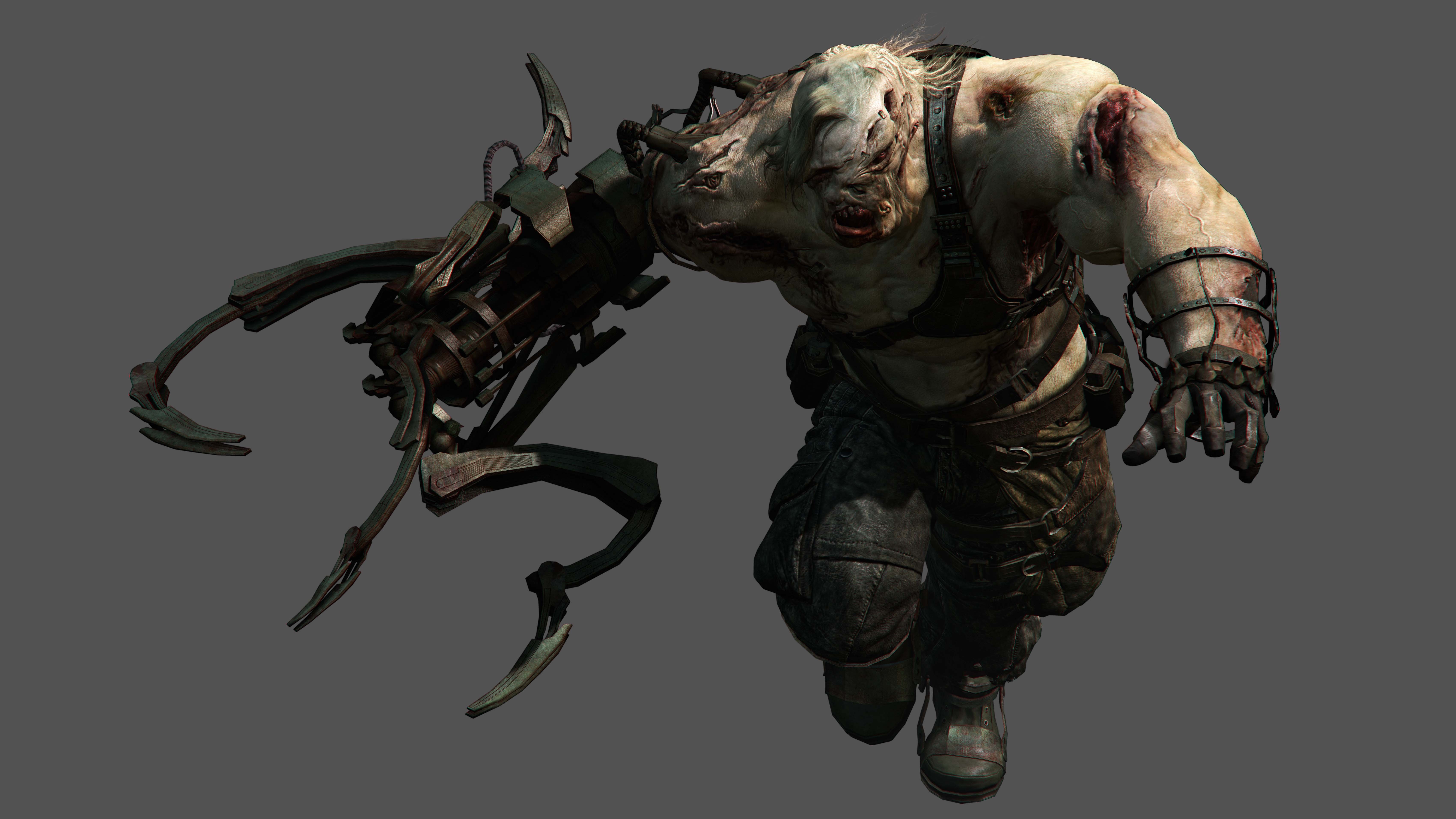 But, it was also Jake's campaign that tapped into the only real fear of mine: driving behind one of those car-carriers on the highway and having it malfunction and throw cars out at you. It's just not the spine-tingling horror I was expecting.

Jake's story, and personality, is actually probably the best of the trio. Who he is and exactly what he means is probably best left unspoiled, but the story and how it all fits together with past games of the series unfolds nicely, even if the broken-up narrative does ruin some of the twists depending on which one you cycle through first. I've always had a soft spot for Umbrella and the whole "Resident Evil" mythos, and the story here does well to continue the canon.

Aside from the story narrative, what little "Resident Evil" spirit is still left in the game is its greatest flaw, and it is near game-breaking at times. "Resident Evil" has always been about conserving ammo and surviving, and that's fine in a survival-horror game: I want to be counting my ammo and saving it. I shouldn't have access to huge amounts of weapons and artillery in the dark, lonely, and scary parts of the world.

But when a game is throwing at you wave after wave of zombies, or massive bosses, even with support-team members to back you up, it should be giving you sufficient ammo, and I had several quite awesome boss fights where I had to run around and let my team mates do the work for me while I knife-fought my way through randomly spawned baddies trying to get a spare bullet or two. If the game is going to change this much and rely this heavily on action-adventure gaming tropes, the rules should also change. Simply giving players the smallest-ass reserves of ammo possible does not make it a survival-horror game. It got beyond frustrating at times, especially if you were past a checkpoint and your option was die or unleash a marathon of melee attacks.

Frustrating ammo reserves aside, the bosses were some of the best-designed parts of the game: huge, frightening, and awesome, seeing the different ways the virus mutated is both beautiful and gruesome. The cut scenes in the game are also quite pretty, especially given the super-realism with the characters (though it does border on extra shiny and almost plastic-looking at times). The impressive graphics go to the tiniest details: beads of sweat running down people's faces, rain water dripping off Leon's jacket. The elemental effects, like rain, lightning, shadows, and the water, are all quite gorgeous, and while there are some places where the detail drops or backgrounds are splotchy, this is a very pretty game.

The game does include a wealth of other features. All three main campaigns are completely playable as co-op (some of them are better designed as co-op levels, leaving the single player at times just sitting around waiting for the computer to do stuff off screen), and you can also "pass through" other people playing the game online when your story intersects with the other campaign's chapters. There's also "Agent Hunt," which allows people online to jump in and control the zombies that are attacking you. These are all neat ideas and interesting uses for co-op modes, but the implementation of them seems to have come at the cost of the single-player experience (and pre-release the online world was quite quiet). The multiplayer Mercenaries mode returns from previous games as well, if that suits your hunting fancy, and after you beat the main three campaigns you unlock a final one staring the mover and shaker in the game: Ada Wong.

How much you enjoy "Resident Evil 6" will come down to your personal tastes for "Resident Evil" flavors. Capcom, for better or for worse, decided that even though players have long complained about having to carry a partner around, that a fully co-op partner-based game was the way to go. In doing so it tried, and failed, to walk the line between the survival-horror genre it pioneered (and is still making good "Resident Evil" games in, if you look at "Resident Evil: Revelations") and action-heavy adventure shooting games a la the sales behemoth "Call of Duty," losing a lot of what made the series unique and special. Some will like what "Resident Evil 6" has to offer, but I think longtime fans of the series are going to find a lot to hate. If you go in comparing it to past games you're only going to find a world of disappointment, even though there are a lot of good things -- just different -- here to enjoy.

- Length: Each campaign is going to take you between 5-10 hours, giving you some good bang for your buck

-You will never ever, ever, ever have enough ammo

Willie Clark had nightmares from "Secret Window," yes, that movie with Johnny Depp in it. If "Resident Evil 6" doesn't scare him, it probably isn't going to scare you either. He also is pretty sure he can't be the only one afraid of driving behind the car-carriers on the high way. Let him know though, by following him on Twitter or Facebook.