Going for the gold

New Super Mario Bros. 2" for the 3DS is an interesting title. As a flagship for Nintendo's current digital offerings it makes sense: it's the first game to be offered both as a download and at retail stores, so why not start with a traditional Mario platformer? But the only problem is this one relies more on tradition than substance, struggling to be different from its predecessors while falling short.

The game's new hook is coin collecting, an interesting idea and concept, but one that it fails to deliver on or take as far as it should. Sure, collecting 1 million coins sounds like a fun idea, but the game never even attempts to come up with a reason as to why I'm collecting all this loot. Because they're shiny? Was Mario also hit hard by the recession? Or does he just have kleptomania?

Whatever the reason, the game showers golden coins at Mario left and right, but doesn't develop the concept What starts at an attempt to freshen up the series takes some time to get off the ground, and does manage to capture a slice of that "Mario magic," but falls short of being overly memorable. What about whole levels built of coins? Coins that attack the player? There is a whole world of coin-related ideas that just wasn't here.

To give credit where it's due, the gold flower may be the single best Mario power-up of all time. When he gets it, Mario becomes a veritable Midas, shooting gold fireballs that destroy almost anything, turning them all into coins.

The problem is, the gold flower is found in the game about as many times as I've seen a glowing, golden flower in real life, and instead the game falls back on the same problem that "Super Mario 3D Land" had: Overuse and reliance on the tanooki suit. (Thought at least it allows Mario to actually fly this time around). I love the suit, I've wanted it back for years, yet I feel Nintendo is now shoving it down our throats so Mario fans never ever beg for a suit to come back again. (But speaking of which, where was my beloved Penguin suit from "New Super Mario Bros. Wii"? Come on now!).

The game suffers from a few of the regular "New Super Mario Bros." maladies: You can only save when beating a castle, you only have six real worlds, not including two forced 'secret worlds, and a bonus one unlocked after beating the game - the bulk of which can be completed quite quickly, and they all follow the same geographic themes we've seen time and time again. Each world's miniboss is a recycled Reznor that barely takes any skill to get past, and I wrapped up the main levels in just under five hours. While DLC levels are promised, that's somewhat short for a main offering. It's also quite easy: by the time I beat the game I had 110 lives stocked up, and the last level was the only one that took me a decent amount of time to finally get through. (I've still got some of the secret ones to make it through, though).

The game includes co-op (local only, which is a shame), a first for handheld Mario games, as well as a Coin Rush mode, which is an attempt at making speed runs and coin collecting a multiplayer experience. Great for those who love and devour those kind of things, but repeating the same levels over and over has never been my cup of tea.

As for the 3D effect of the game, well, it's pretty much non-existent. Unlike the previous NSMB games, which have always strongly lacked in the background design department, this game actually has decently made backgrounds. But instead of going for a true 3D effect, the higher you turn on the 3D on the 3DS the more these images blur, creating a depth-of-field view. Neat, but it ruins what detail was actually put into designing the level backgrounds. It's almost as if Nintendo didn't want to pull the 3D idea entirely, but wasn't sure what to do with it. There are a few instances where the 3DS's horsepower is actually utilized - like the fireball effects in the castles. I'm not expecting the game to set graphical benchmarks, but I still felt it lacked the polish it should have running on the 3DS.

With Nintendo pumping out Mario games like it's their job the past few years, the quality of the titles is possibly going to suffer. "New Super Mario Bros. 2" is a big step above its DS predecessor, and has its own share of new ideas and solid Mario moments. Even the return of the Koopalings, the new gold flower, or all the nods back to the greatest Mario 2D platformer, "Super Mario World," aren't enough to make this any more than a silver-tier Mario game. 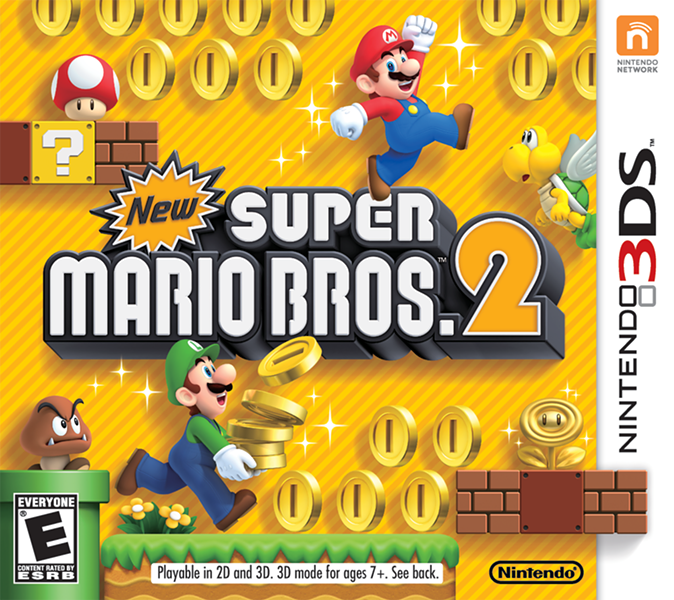 If there was an adult-sized Penguin suit Mario costume, Willie Clark would probably wear it for Halloween. He's also furious at the travesty that is the skeleton coaster level in NSMB2. If you know where to find a Penguin suit, make sure to let him know on Twitter or Facebook.