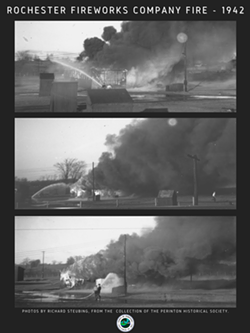 During World War II, the Rochester Fireworks Company on Whitney Road in Perinton, like many factories at the time, had been converted to manufacture war products - in this case, military flares.

"And that small explosion broke out into a fire and the fire spread quickly through a building where many people were working," said Perinton town historian Bill Poray.

On Thursday, the town of Perinton installed a plaque at the site of the former factory on Whitney Road near Baird Road.

Poray said it's important to honor the victims of the 1942 tragedy who died in service to their country.

"And to help our residents and people who are passing through understand what a significant event this was."

The fatal fire, he said, made headlines in newspapers around the country.

It was not unusual during the war for women to fill most of those factory jobs, with many men serving overseas.

"What a trying time it must have been already, to be engrossed in this really horrific war and always fearing news from overseas and the loss of sons or husbands and then to learn of this loss of primarily women - mothers, grandmothers, daughters of these families in our community," Poray said.

One of the women who died in the fire was Evelyn Ellis of Fairport. She was 48 years old.

Her grandson, John Ellis, said his grandfather also worked at the factory as a security guard.

"And he had just gotten off his shift," Ellis said, "otherwise he would have been in it also."

The family tragedy was compounded in another way, though. Ellis said his father, also named John, was a young Fairport firefighter who responded to the fire that claimed his own mother's life.

"And that's probably why he never really talked about it," Ellis recalled of his father, who later became a sheriff's deputy. 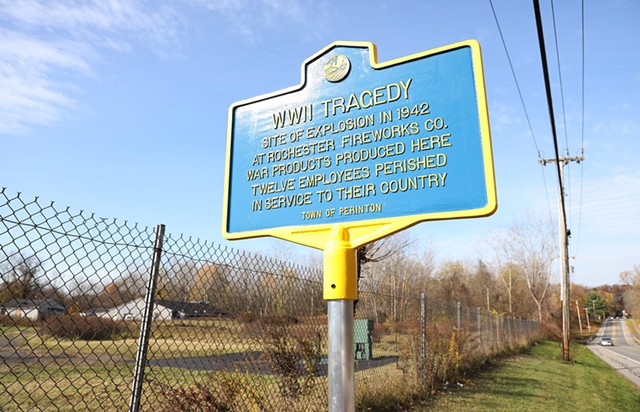 Many of the victims of the fire were residents of Fairport, East Rochester, and Perinton.

Poray said an advertisement in a Fairport newspaper dated the day before the tragedy was seeking women aged 21 or older to work the evening shift at the factory.

"One of the women from Fairport who was killed in the blast answered that ad and started her employment at 4 o'clock on the day of this accident," he said. "A half an hour later, she was dead."

According to Poray, fireworks were largely unregulated in the 1940s and for that reason, people did not necessarily consider the plant a safe place to work.

He said there was an account of one victim whose mother had tried to warn her of the dangers.

"Her mother pleaded with her 'Please, give up that job at the fireworks factory,' just a week before this incident and she told her mom, 'I will. One more week and I'll give it up,'" Poray said.

The efforts of the expanded wartime workforce at the plant were recognized by a high ranking military leader.

In 1944, the company received a commendation from Rear Admiral G.F. Hussey, U.S. Navy Chief, after the military flares used made in the Perinton factor were used to rescue two army pilots who were forced to parachute away from danger.
The victims of the fire were: