I've always had this romantic notion about hot air balloon rides — of rising to great heights and taking in spectacular views — which is sadly at odds with my uneasiness about said heights. I've imagined the insecurity of being exposed to the open air in a swinging basket...no thanks. But having not actually gone up in a balloon, I realized that I know absolutely nothing about it. Regionally, there are opportunities to change that.

The 19th annual Red, White & Blue Balloon Festival at Letchworth State Park takes place May 24-27, and features 25 balloons from several states. Though there are six flights scheduled, whether or not the balloons will fly during the rally is contingent upon the weather. But you can go up in a balloon over Letchworth from the spring to the fall.

Leading up to the festival, CITY spoke with Scottsville native Captain Sean Quiqley, who has been piloting balloons since 1987, and has logged more than 2,500 flights. Quigley bought Balloons Over Letchworth — the only company that has a contract with NYS to fly over the state park — in 1993. Although he recently sold the company, he will still pilot for the new owners. In a phone interview, Quigley said that after 26 years of running the business, "I just want to do the fun part now."

CITY: How did you get into flying hot air balloons, and what's the history of the festival?

CAPTAIN QUIGLEY: It was a childhood dream, believe it or not. I read about it in Popular Mechanics when I was about 10 to 12 years old. In fact, I still have the issue. I got enthralled with it. There was a big red balloon on the front cover — that's why I bought the magazine. I just dreamed about balloons, and being up in the clouds.

I started the festival in 2000. It started out with 10 balloons, and now we're at 25. I've got quite a list of pilots that still want to come. But I have to hold it at around 25 because of the amount of room we have on the field.

When you go to a balloon festival, when a pilot is invited, they give you a hotel room, food usually, show-up money, pay for your propane, etc. These pilots all come on their own nickel from Florida, South Dakota, Illinois, Indiana, New Hampshire, Vermont. I've had pilots from all over. When I started it, I didn't want it to be a commercial venture. I just wanted a bunch of pilots who were my friends to come and enjoy flying Letchworth. Well, it snowballed and these pilots come every year. They pay their own expenses. I think the public thinks we're getting paid to do it; we're not. They put on a heck of a show, and it's their nickel. We get a couple thousand spectators, it's jam-packed.

The annual rally is this month. Is that the only time people can take a balloon ride over Letchworth?

We fly seven days a week, from the first of May through the middle of October.

Are there specific seasons or months that are busier than others?

Everybody likes to wait until the leaves change color, but in all honesty that's not a good time — the weather's usually pretty windy and rainy then. Not real good for ballooning. Summer's the best time, and of course the park gets so many visitors in the summertime, on vacation. But my busiest month, phone call-wise, it'd be October.

Has your piloting been strictly within the company and at Letchworth?

What conditions are prohibitive for tethered rides or flights?

Well, we don't do tethered. With free flight, we normally have to have winds of about five miles per hour or less. That's why we fly just before sunset, when the winds die down. Or just at sunrise, or the first couple of hours after sunrise. As the day wears on, the winds pick up, and there's thermal activity that's very hazardous, so you can't fly a balloon in the middle of the day. You know when you see the hawks floating around in a circle? They're riding thermals — rising pockets of warm air — and you don't want to be in a balloon when that's going on. And we can't get the balloons wet, so we don't fly in the rain.

What are the mechanics of actually flying? To me it looks like floating, and that you don't have a lot of control. How do you steer a balloon?

We get very good weather reports about wind levels, but of course, a weather forecast is just a forecast. They're not always 100 percent right. But that's basically how we do it.

Have you had any particularly harrowing experiences flying?

Not really, because we are very, very conscious of the weather conditions. If it's not safe, we stay on the ground. It's that simple. I always tell people: My butt's up there, too.

I imagine that over the decades, you've collected some anecdotes about passengers. Anything like marriage proposals?

We have several proposals every year. That's a lot of fun. And we've had several weddings aloft. I'm also the town judge here, so I can actually perform the ceremony. When I do that, I normally marry them on the ground, and then we take off — so their friends and family can gather around and be part of it.

Have you ever had an experience where someone was not really into heights but they overcame it?

When you take up eight people, one or two of them at least — I can tell immediately which of them are nervous. It's the fear of the unknown more than anything. I've even had people sit down in the bottom of the basket when we take off. But within five or 10 minutes, they're standing up, looking around, pointing out things on the ground. Those are usually the first people to say, "I wanna do this again!" when we land.

I've never felt that it was a fear of heights, I think it's a fear of falling. And once people realize they're not going to fall, the fear goes away. You've got the basket up to your chest. So when you get in there, once people feel the security of the basket, they realize they're not going to fall out. And everything goes fine. I've never had anybody get sick up there —I get asked that a lot.

It seems like somewhere between daredevilry — it's not skydiving — and just getting to appreciate some awesome sights.

Well, there's no feeling of motion at all. I've always equated it with standing on the floor, and you're looking down and watching a slow-moving movie of the Earth go by. It feels like you're stationary. Because you've gotta remember: You're in the wind, so you don't feel any wind. There's no rocking or rolling, the balloon doesn't swing or sway. And that's what people fear: They think that's it's going to be like the Darien Lake ride. And it's just the opposite.

Aside from that revelation, what do you think the general public doesn't know about going up in a hot air balloon?

The other thing is, they think it's going to be freezing cold up there, when it's actually warmer. You've got the burners in the balloon, number one. And number two, we don't go to 20,000 feet, where it's really cold. I tell people: Whatever conditions there are on the ground, you'll be comfortable up in the air with. So if it's 70 degrees, dress for 70 degrees and you'll be fine. 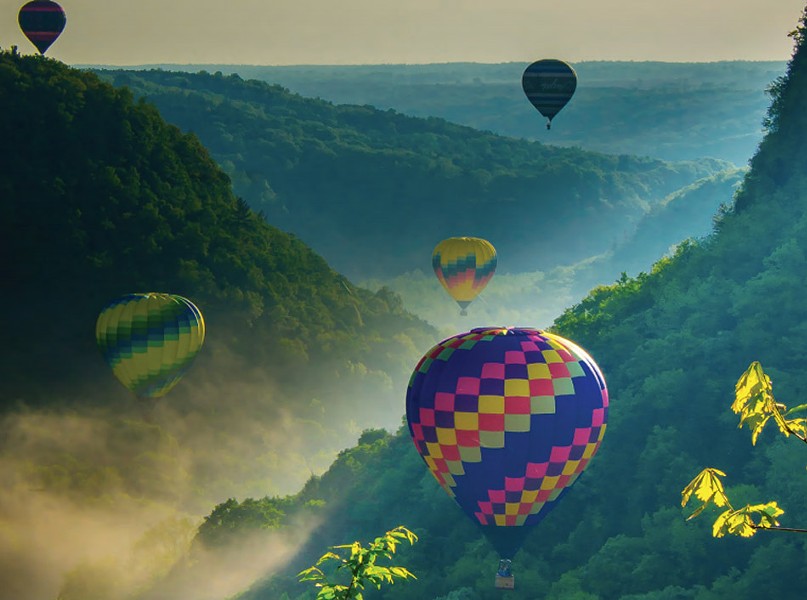 What height do you get up to?

Normal flights, we go a couple thousand feet. Sometimes I might have to go higher to get a certain wind direction, to get into an area where I know the landing sites are more prevalent. So I might climb up to 4-or-5,000 feet. I try to make it half-and-half: half of the flight down by the trees, waving to people on the ground or even talking to people on the ground, and the other half up high so you can get a real nice view.

Do you have an idea of how many flights you've clocked?