The latest group exhibit at Loud Cow -- one of Rochester's most experimental art spaces, located in a barn in Spencerport -- opened on Saturday night. For this iteration of the biannual shows, Loud Cow's founder Aaron Delehanty turned over curatorial duties to artist Amanda Chestnut, who gathered an international, diverse group of eight artists who each tackle the concept of identity in their work. "Verified" includes photo, video, and sculptural installations, and the opening reception included three performances.

"The theme of the show is verification: Who gets to claim identities, who gets to deny identities? What happens to individuals when identity is taken away?" Chestnut said in an interview with CITY.

Saturday's event saw community members gather to witness and participate in performances, sustain discussions, eat tacos and drink beers, and roast marshmallows around a bonfire. Brian Murphy's looping video of wrestlers -- an unending grappling match between two men -- was projected through a window in the barn's loft, only visible after dark. Megan Joy May turned a corner of the barn into a sanctified space, and offered viewers the chance to participate in a ritual of connection and letting go. Among the portraits by Juan Madrid is a photo of his friend's bare ass forming a vulnerable moon.

Aside from the emotional weight of the work, some of the artists stepped out of other comfort zones. "Anina Major is a ceramic artist, and she brought me video," Chestnut said. "Reb Ayşe, who is a printmaker, is showing her first sculpture. This is an experimental space, and a difficult conversation, and the artists have taken advantage of it and really put themselves artistically and emotionally on the line for this show. 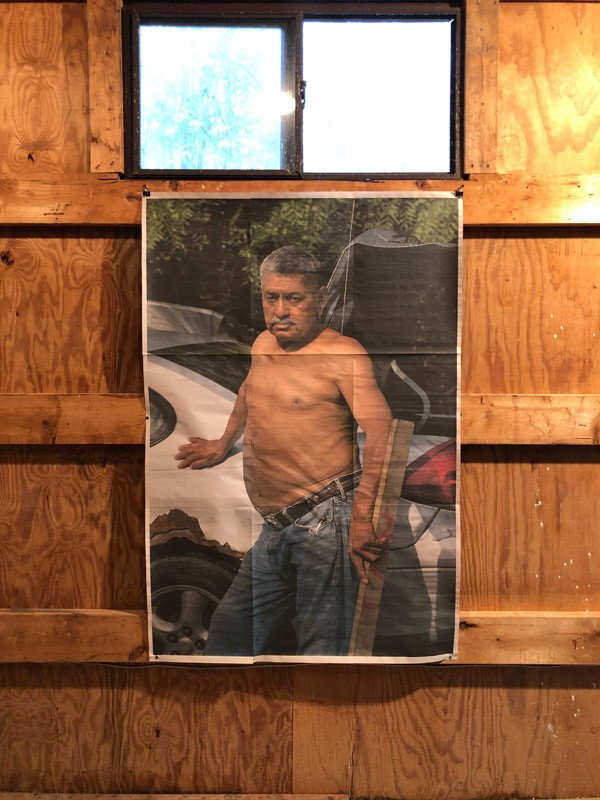 CITY: Where did the concept for this show come from?

Amanda Chestnut: "The original idea of being "verified" came from a conversation I had with a friend online. He had a press pass to an early screening of "Black Panther." And he couldn't make it. And I said, "As your black friend, I think I should get this ticket." He said I could have it, but I couldn't make it to New York. He said something in jest about being "Black Friend Verified," which kind of sparked an idea in me, because yes, he totally is, but usually the "I have black friends" statement is a statement made from somebody who is absolutely not black friend verified. So I think somewhere in that conversation I joked that I should make buttons to give to people who are actually black friend verified. This idea had been kind of kicking around for a while.

How did you come to choose the specific set of voices included in this show?

I very deliberately wanted to include white voices, because this isn't just about black identity. I think in general and in the arts, when we talk about identity we do a lot of highly localized conversations; we'll talk about Latino identity, we'll talk about black identity, or we'll talk about gay white male identity, or woman identity. But it's still pretty cis-hetero. It was really important to me -- and I think largely because I'm mixed -- to include all of these voices in this conversation, because our identities don't exist in a vacuum. I'm very used to having to navigate white spaces as a woman who is note quite white enough, and black spaces as a woman who is not quite black enough. And culturally we tend to speak about race very much in dichotomy. It's an "or" situation. And for the most part, many people are "and," but linguistically and culturally we don't give them space to be "and."

I really wanted to include multiple voices in this, because that's how this conversation functions the best. So there are white artists, there are black artists, there are Latino artists. There is a white-passing brown-identifying artist who is coming to terms with her own identity as a person of color. For her this show is in part about how she is recognizing herself as a person of color. That's an important voice to have in this conversation.

What are some aspects of the show that you feel accomplish what your goals were?

A lot of the works individually deal with identity, but what I'm most happy about, what I hoped to accomplish, is how they deal with identity in conversation with each other. Because you see Anina's work, where she places this crown on her head, and looks directly at the viewer. And it's on the same plane in the gallery as Sarah Anthony's work, which is nine portraits of young men, many of which are also looking directly at the viewer, but in a very different way emotionally. And each piece individually is saying something very different, but when you look at the very solemn but powerful look in Anina's piece, then look at Sarah's piece at these men who are posed in sometimes sensuous, sometimes gentle or exposed, insecure kinds of ways, and the majority of them are white. I think the conversation that happens between those two works is the kind of thing I was hoping to achieve for this show.