Monday 4:to 5 p.m. (pick-up only) | facebook.com/grassfedrochester

"Vegan" and "butcher" are not two words you expect to see side by side. But with the help of Grass Fed, a local purveyor of plant-based meat alternatives, there's no reason a vegan lifestyle can't be compatible with a BLT, some chicken schnitzel, or a Thanksgiving turkey. Co-owned by Rob Nipe and Nora Rubel, the new business is the first plant-based "butcher" in the Rochester area, offering a rotating range of meatless meats from bacon to cutlets and Italian sausage.

Grass Fed's operations are based inside the Hungerford building on East Main, near the Rochester Public Market. It shares kitchen facilities with Eat Me Ice Cream, which specializes in both dairy and vegan frozen desserts. Each week, Grass Fed publishes an online order form from which customers can select the products they would like to pick up the following Monday. The weekly order form is accessible via Grass Fed's Facebook or Instagram pages, and payment is collected through PayPal. A separate pre-ordering form for vegan Thanksgiving roasts (stuffed or unstuffed) is also available on Grass Fed's social media.

I visited Grass Fed on a recent Monday during its second week of business. It was pickup day, and the week's orders of vegan bacon, turkey slices, and Italian sausage were neatly wrapped in paper and stacked on a table. I chatted with Nipe as customers trickled in to pick up their orders.

Nipe and Rubel have been vegan for about four years; they made the switch primarily for health reasons. But then, Nipe says, "I began to think it was the nicer way to live."

He says he enjoyed the challenge of reinventing his old favorites and making them vegan-friendly. After reading about The Herbivorous Butcher, a vegan meat and cheese market in Minneapolis, Nipe reached out to the owners for advice on getting started making and selling plant-based meats.

"I'm amazed at how supportive the vegan community is," Nipe says. Eventually, he and Rubel hope to expand Grass Fed's operations in order to open a storefront and sell wholesale to restaurants. 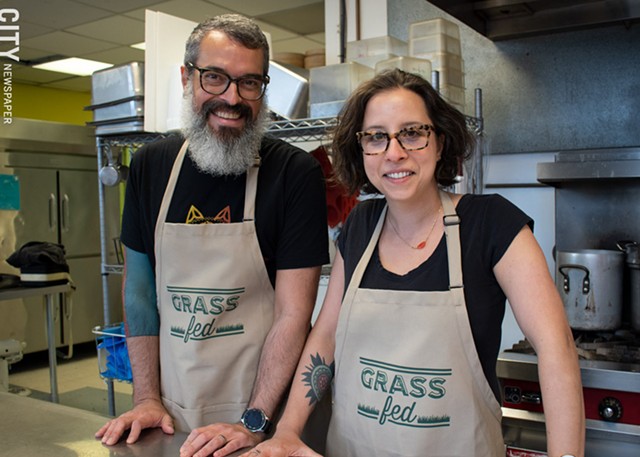 I went home with a pack of turkey slices made from vital wheat gluten. The culinary use of this plant protein can be traced as far back as 6th-century China, where it was used as a meat substitute by vegetarian Buddhist monks. Vital wheat gluten is made by washing away the starch from wheat dough until only the sticky, elastic gluten remains. Today, powdered vital wheat gluten is available commercially, and is much easier to work with.

"Essentially you're making a dense bread to get the texture you're looking for," Nipe says.

When cooked, the finished product has a meaty appearance and texture and can absorb sauces and seasonings. Vital wheat gluten is very high in protein and low in calories, fat, and carbohydrates. Nipe says he's also working to develop gluten-free products to accommodate more diets.

This was my first encounter with vital wheat gluten, and admittedly, I wasn't sure what to expect.

First, I sampled the product on its own. The "turkey" slices were a little spongier than actual deli meat, but the flavor was savory and salty just like the real thing. On a sandwich with all the fixings, I could barely tell the difference.

According to Nipe, most of Grass Fed's customers thus far have been vegan, but there is also interest from omnivorous consumers curious about meat alternatives. Consumer familiarity with plant proteins and meatless meats is growing, in part due to companies like Impossible Foods and Beyond Meat, which produce plant-based meat substitutes that are sold nationwide at chains like Burger King, Denny's, and TGI Friday's.

"It's no longer something that's hidden away in a health food store," Nipe says.

Mary Rice is a freelance writer for CITY. Feedback on this article can be sent to Rebecca Rafferty, CITY's arts & entertainment editor, at becca@rochester-citynews.com.