Artist Olivia Kim sculpted this statue and twelve others which were installed around Rochester in 2018 to honor Douglass’ legacy. But on July 5, the Kelsey's Landing statue was torn from its base and thrown into the Genesee River gorge. That act of vandalism coincided with the 168th anniversary of Douglass's most famous speech, "What to the Slave is the Fourth of July." Rochester Police say they have not charged anyone in connection with the incident.

During a ceremony Thursday, a new Douglass statue was installed to replace the damaged one, which could not be salvaged. Leaders of the 2018 project, Re-Energizing the Legacy of Frederick Douglass, had a statue in storage — it was removed from its home on Tracy Street for safe keeping during nearby construction. Kim said she'll be making another one for that location.

“This vandalism is very painful,” Kim said. “Please do not allow the pain to tear us apart. We need to remember that the love, unity and cooperation that made these statues cannot be touched.”
The statues are based largely on one created in 1899, which stands in Highland Park near the site of Douglass’s home on South Avenue. The Re-energize the Legacy of Frederick Douglass Bicentennial Committee, which was led by SUNY Brockport professor and RCTV general manager Carvin Eison, raised funds for the statues.

“You can tear down each and every one of these monuments, you can throw them in that gorge like people tried to do,” Eison said. “But you can never diminish the character and the values that Mr. Douglass stood for.”

Eison also said we are still learning from Douglass today.

“There’s an old saying that goes something like this, when the student is ready, the teacher will come and nearly 130 years after his death, the teacher in the form of Frederick Douglass still comes to teach us all,” Eison said.

Among those who say they’ve learned from Douglass are Charles Milks and John Boedicker, two college students arrested and charged with vandalizing another statue of Douglass in 2018. They were also on hand to help with the installation on Thursday. Re-energize the Legacy of Frederick Douglass project leaders said in a news release that the pair “participated in a significant restorative justice reconciliation” process. 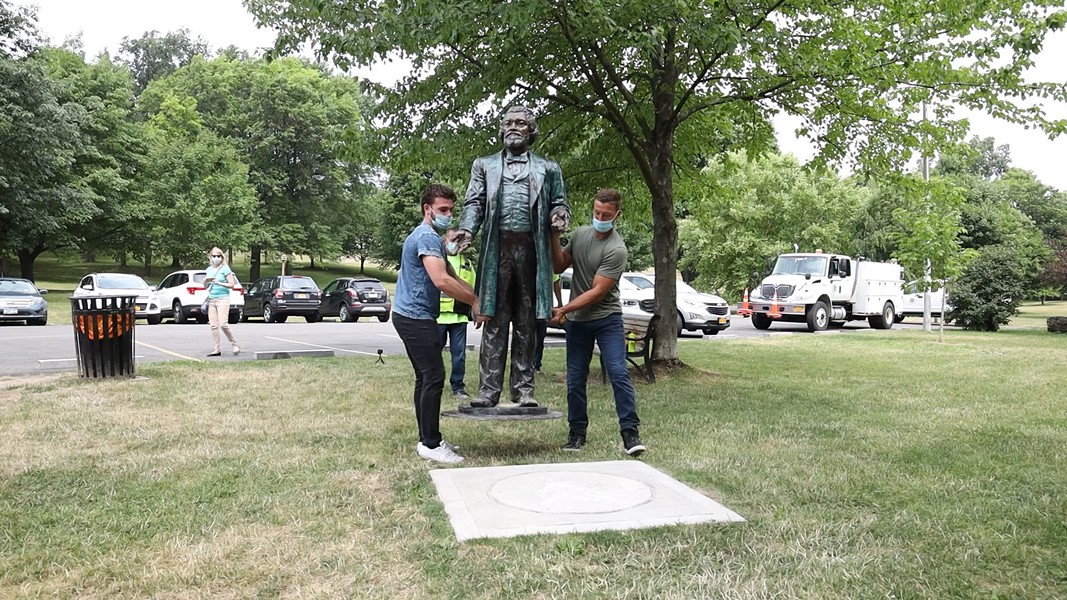 Boedicker said they can’t escape what they did but they can work to ease the pain they caused.

“It’s going to be a defining moment in our lives but it doesn’t mean it can’t be a positive thing from that instant on,” Boedicker said.

The ceremony drew representatives from the city of Rochester and Monroe County governments, including Deputy Monroe County Executive Corrinda Crossdale.

“This monument reminds us of the struggles that Frederick Douglass fought over 100 years ago and is a symbol that is meant to educate, connect and inspire us all,” Crossdale said.