By the time Mary Brown moved out of her apartment at 447 Thurston Road last year, she and the other residents had — for too long — dealt with black mold, infestations, uncollected garbage, sewage backups, unsecured doors, squirrels eating through the walls, and "big" rats.

"We were living in some very poor situations," said Brown, who is now living in a different apartment complex.

Earlier this year, state lawmakers made upstate communities eligible to opt in to tenant protections that have been in place downstate — mostly New York City and its suburbs — since 1974. 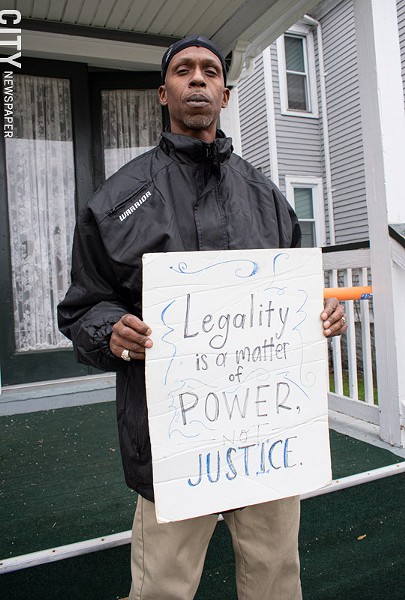 Those laws might have helped Brown and the other residents of 447 Thurston Road, had they been in place earlier. For example, the tenants could have applied to the state for a reduction in their rents.

The city sued the landlord and, eventually, a judge ordered rents to be lowered there for six months. The building has since been sold and is under new management.

Now that Rochester has the ability to opt in to the 1974 Emergency Tenant Protection Act, members of the City Wide Tenant Union — Brown is one of them — have been urging the city to do so.

To do that, the city first needs to declare a "housing emergency," which the 1974 law defines as a vacancy rate of less than 5 percent in the housing stock it wants to regulate. But before the city can declare that emergency, it has to conduct a rental vacancy study to prove that there is one.

All nine members of City Council have signed a letter to Mayor Lovely Warren expressing support for such a study, and last week Warren submitted legislation to do it.

Under the legislation, the city would commission a vacancy study of buildings built before 1974 and containing six units. The city would roll the study in to an existing contract with Northeast & Bucks Co., the consultant it hired to help update city housing plans so they align with the Rochester 2034 comprehensive plan.

The Emergency Tenant Protection Act is probably best known for its rent stabilization provisions, which allow cities to set up boards that can limit rent increases in buildings that meet certain criteria.

Avoiding spikes in rent is one main reason the City Wide Tenant Union has been pushing for city officials to move forward with the steps necessary to opt in to the law.

In Rochester, two out of five tenants are rent burdened — meaning they spend more than 30 percent of their income on housing costs — and of those people, 50 percent are severely rent burdened, said Allie Dentinger, an organizer with the Tenant Union.

The Tenant Union estimates that the laws would apply to around 25,000 existing units in the city, Dentinger said.

"We're looking at a significant number of people that would be impacted by this," Dentinger said.

Jody Francis was living in an apartment above the Rent-A-Center at Meigs Street and Monroe Avenue in 2018, when the building changed hands.

The new owner began pushing tenants out of their apartments so he could renovate the properties; some of the residents in the building were elderly people living on Social Security, Francis said.

The tenants banded together and got the new landlord to meet with them, Francis said. They worked out a plan where the tenants would be relocated to other properties owned by the landlord, and could return to the building once renovations were done, he said. Francis moved to an apartment house right next door, where he still lives.

"We didn't want no one thrown out in the street," he said.

Rents in the building are higher now, however, and not all of the prior tenants could afford to come back, Francis said. He's been able to manage the higher rent in his new place but is concerned that a future increase could force him out.

Francis said rent stabilization laws "definitely would have helped in our situation with the rent increase."

The laws also require landlords to automatically renew tenant leases as long as the tenants are in good standing.

State lawmakers have considered expanding New York's rent stabilization laws to upstate throughout the years, but landlords have consistently pushed back against the idea. They've argued that the laws will hinder their ability to earn a return on their property investments.

Ryan Acuff, an organizer with the Tenant Union, said that the law — the 1974 version was drafted by Republicans — has provisions to ensure that landlords make a fair return on their investments.

Notably, landlords can appeal to the local rent stabilization board for a hardship exemption if they can show that the rate of increase set by the board won't provide them an adequate return.

A state fact sheet also notes that landlords can also apply for rent increases when they make major investments to improve buildings. The law should, instead, lead to more affordable, higher quality apartments, and more security for tenants, he said.

"Landlords are not going to go out of business from the ETPA," Acuff said.