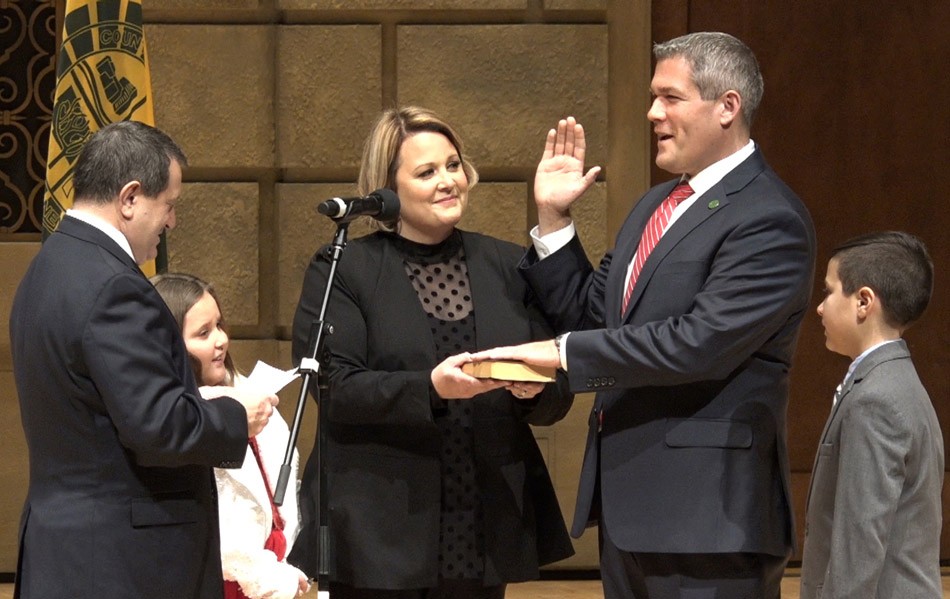 The 2020 election schedule in Monroe County already had its share of moving parts.

Then state Supreme Court Justice Matthew Rosenbaum added another when he declined to take the seat to which he was re-elected in November amid a state investigation into misconduct allegations against him.

And elections officials will at some point have to contend with vacancies in the Monroe County Clerk’s Office, opened by the election of Adam Bello to county executive, and in the 27th Congressional District, left when Chris Collins resigned and then pleaded guilty to insider trading-related charges.

New York has three big election days coming up this year: the presidential primary on April 28, the regular primary on June 23, and the November 3 general election. But the vacancies have made the schedule more complex.

The vacancy left by Rosenbaum will likely be the simplest for elections and party officials to handle. The seat will stay empty for the year and be filled through the general election, French said. Officials will plan on having four judicial positions on the general election ballot instead of the three there were planned.

Potentially creating bigger waves will be how Governor Andrew Cuomo responds to the vacancy in the clerk’s office and the congressional seat.

It is expected that Cuomo will appoint someone to the clerk’s office, which, in turn, will touch off a potential primary among the handful of people who have already declared their candidacies for the office, and, later, a general election.

Cuomo is also expected, at some point, to declare a special election for Collins’s former seat. That will send elections officials and party machines scrambling to prepare for what will be a high-stakes contest.

Collins resigned on September 30 and his seat has remained vacant ever since. The sprawling, Republican-leaning district covers much of western New York and includes the Monroe County towns of Hamlin, Wheatland, Rush, and Mendon, as well as a part of Clarkson.

Republicans and Democrats in the district have asked Cuomo to call a special election. Cuomo has said he’s leaning toward scheduling the election for April 28, the day of the presidential primary, because doing so would save money. But the idea hasn’t sat well with Republicans.

French points out that Democrats have a big, multi-candidate presidential primary that’ll draw lots of party voters to polls that day. Republicans won’t have a comparable contest on the ballot that day so they wouldn’t have the same draw.
That dynamic doesn’t seem fair, French said.

State Republican Party chair Nicholas Langworthy is suing the governor as a way to force him to set the election and, he hopes, schedule it before the presidential primary. In the complaint, he and two other Republican activists argue that the approximately 750,000 residents in the 27th Congressional District “are being denied their right to representation in the U.S. Congress” because of the governor’s refusal to call the special election.

When Cuomo does call the race, both parties have candidates in the waiting.
Democrats have mostly settled on former Grand Island Supervisor Nate McMurrary, who narrowly lost his challenge against Collins in 2018. McMurray’s never really stopped campaigning ever since.

Republicans are narrowing down a field that includes state Sens. Chris Jacobs and Robert Ortt, Erie County Comptroller Stefan Mychajliw, and others.

When Democrat Adam Bello took over as Monroe County executive on January 1, he left his position as county clerk vacant. Democrats want to hold on to the seat to give the party a firmer grasp on county government (it lacks a majority in the County Legislature).

The vacancy doesn’t require a special election, since Cuomo will appoint someone to it. But whoever he picks — likely another Democrat — will have to run for office to stay in the job past December 2020.

Already, a Democratic county clerk primary is developing. Assembly member Jamie Romeo has said she’s not running for re-election and will instead seek the clerk position. Jennifer Boutte, who works as director of development and community engagement for CDS Life Transitions, has also declared her candidacy for the seat.
But the clerk contest is just one of several Democratic primaries this year. Aside from the presidential primary, they’ll all happen in June.

In the 25th Congressional District, Representative Joe Morelle is up against Brighton Town Board member Robin Wilt. Both candidates ran in a four-way primary for the seat in 2018, though Morelle ultimately won.

Most of the likely Monroe County Democratic primaries would be in state legislative races. They include:


Jeremy Moule is CITY’s news editor. He can be reached at jmoule@rochester-citynews.com.

This article has been updated to note that Sarah Clark is also seeking the 136th Assembly District seat.