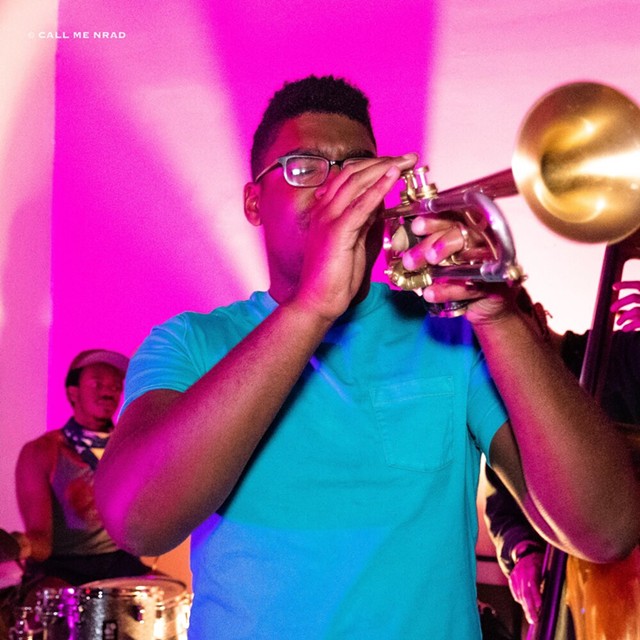 Each Monday night at 8 p.m., UUU Art Collective opens its doors to welcome some of Rochester’s most promising jazz musicians to take the stage. The format at the contemporary art space on State Street takes cues from popular jazz haunts like Dizzy’s Club in New York City.

Every week, a curated array of local performers come together to share improvisational renditions of pieces by jazz composers from Thelonius Monk to John Coltrane. During the “late-night sessions” at 10:30 PM, musicians from the crowd are encouraged to bring up their instruments and jump into the mix.

Since UUU opened in 2019, co-owners KC Sullivan and Zac Lijewski knew that they wanted the gallery and performance space to be a hub for rising talent in the local jazz scene. As a music business student focusing on jazz guitar at Nazareth College, Sullivan often found himself struggling to find a place to share his craft.

“When I was over at Nazareth, we studied jazz and were looking for a place to play jazz, Sullivan says. “But there wasn’t any jazz club. If you’re in a city with all of this talent, with a lot of trained cats studying the music, they have to go play it. At the time, we weren’t able to go play it. So, we knew that when we opened up the gallery, there would be this function of it as a strict jazz club.”

This summer, Sullivan reached out to upright bass player Rafael Enciso, a recent graduate from the Eastman School of Music, to help establish the weekly event at the gallery. During his time as a student at the world-renowned conservatory, Enciso recounts that he had similar difficulties as Sullivan.

“The Rochester scene is a weird thing,” says Enciso. “There are a lot of really good musicians in town because of Eastman and the nature of the city. It’s a good, affordable place for artists to live. There’s a lot of really burning musicians, but there’s a void of places to play and venues that will treat us with the respect that we deserve.”

Enciso shares that most of his gigs at Eastman were for private cocktail parties, where his music acted as texture for a larger event with little audience engagement. But at UUU’s weekly jazz nights, Sullivan explains that participation from the crowd is an essential part of the experience.

“It’s a late night collaboration,” he says. “There’s a lot of communication between the audience and the musicians. For half of the night, the cats are pulling people out of the audience to play.”

According to Enciso, whose role is to organize the musicians each week, the jazz nights provide a space for younger audience members to gain a greater understanding and appreciation for the genre.

“It’s slowly becoming a thing where people my age are realizing that improvised music isn’t something of the past,” Enciso says. “It’s still very much a progressive field of music, and you can go and enjoy it as modern music and not a relic of another time. I’m hoping that gigs like this in hip areas will start to change that mentality.”

After several weeks of jazz nights in the books, Sullivan shares that the audience is getting stronger each Monday, with more and more new recruits eager to experience a night of jazz surrounded by good company.

While Enciso plans to move away in August to pursue his graduate degree at the Manhattan School of Music, Sullivan promises that the jazz nights will continue indefinitely.

“I think what needed to accelerate this jazz community in Rochester was a place to play,” says Sullivan. “A place for people to play, and a place for people to go listen. And then, one that cared for what the musicians were doing. You’re not just in to get five-dollar chicken wings and a pitcher of beer.

“We’re really focused on the culture and it has to go back to the music. We care about this being a jazz club that doesn’t go on just for a couple fun Monday nights, but continues to go on for the years to come for all the cats that come through Rochester.”

Jazz nights at the UUU Art Collective occur weekly on Monday nights starting at 8 p.m. The “late night sessions” start at 10:30 p.m., and all are welcome to join the musicians on stage. Admission is $5.