The University of Rochester's Laboratory for Laser Energetics is one of the most important scientific research facilities in the country. As one of several facilities that test the United States' nuclear stockpile for readiness, it plays a critical role in deterring adversaries from attacking the country. And its work on developing a new clean energy source puts it in an elite group of laboratories trying to head off a looming global energy shortage.

Roughly 350 people, mostly engineers and physicists, work there. But this key asset of the UR, not to mention the country, came dangerously close to being defunded. The Trump administration targeted the laser lab for a series of budget cuts earlier this year that would have meant the end of the lab and its highly-respected Omega lasers by 2021. UR officials were obviously relieved last March when the $70 million in federal funding for the lab was restored, and bumped up to $75 million.

The lab has faced funding cuts before, "but nothing this Draconian," says Michael Campbell, the laser lab's director. "This was going to be a phase out and shut down." 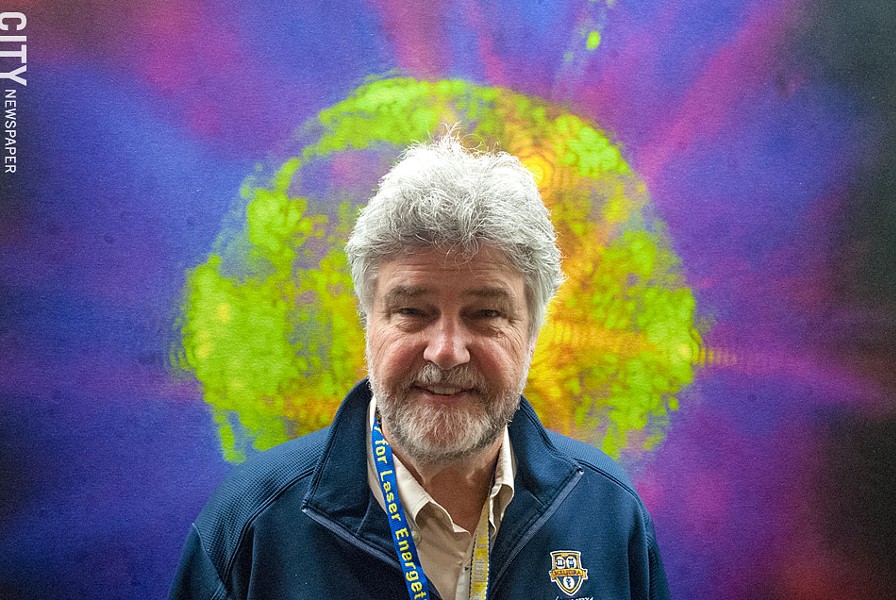 Despite its prestige, the laser lab isn't much to look at. Built in 1970 on East River Road in Brighton, just south of I-390, it's over a mile from the UR's main campus. The plain-looking brick building hardly looks like it would house one of the country's most powerful lasers, and it goes largely unnoticed in Rochester. Unless you're interested in energy science or you're pursuing a degree in engineering or science at the UR, you may not have heard more than a passing mention of it.

Campbell agrees that people can relate better to research in cancer, heart disease, and HIV/AIDS, for example. Medical research, even to the science-phobic, is often sexier partly because we're more familiar with the benefits of newer procedures and treatments. And that familiarity may shape our attitude about the value of supporting some types of research over others, Campbell says.

Nor is public opinion always positive about nuclear energy and defense spending.

The laser lab has two main responsibilities, says Campbell. The primary one: supporting the National Nuclear Security Administration, which, he notes, "is responsible for maintaining a reliable nuclear deterrent for this country."

The US hasn't tested or built new nuclear weapons since 1992, and in 1996, it signed the Comprehensive Nuclear-Test Ban, hoping that less testing would discourage proliferation of nuclear weapons.

"Yet we have thousands of these weapons," Campbell says. "And, unfortunately, the world has not become friendlier. We have North Korea, a more assertive Russia, and then there's China. The world is more complicated and these weapons are an ultimate deterrent in complicated times."

So how do we know that the weapons in our nuclear stockpile still work? All of the weapons went through extensive testing when they were created, Campbell says, "but we want to make sure that they still work in the same way they should as they age."

Every nuclear weapon was built using computer models, Campbell says. In conjunction with the Lawrence Livermore Lab in California, the computer codes and the physics of those models are checked and rechecked to see how the weapons' parts will perform under every kind of condition.

Testing always comes down to people knowing what to look for, Campbell says. "That takes a certain type of expertise that ensures that they would work in the event that they have to," Campbell says. "We pray that never happens. But we also have to maintain the expertise that helps us know what North Korea is doing in its nuclear program. When we see Kim Jung Un standing next to what looks like a nuclear weapon, how do we know whether it's real? If we detect some type of seismic activity, how do we know what level of nuclear weapon is being tested?"

The expertise the laser lab staff uses to test and maintain this country's weapons is the same expertise needed to know what other countries are doing in their nuclear programs, says Campbell.

While the laser lab's role in US defense makes up much of its day-to-day work, the lab is one of a handful of research facilities designed to try to create fusion. The lab continues that work today and is widely regarded as the best in the world in university-based fusion research, Campbell says.

Fission and fusion were both discovered in the 1930's by studying the activity of stars. Both processes are nuclear reactions that produce enormous energy. Fission occurs when an atom's nucleus is broken into smaller parts. This is the power behind an atomic bomb, and it's used in nuclear reactors to produce electricity.

Recreating fusion in a lab, however, is another matter, Campbell says. Fusion occurs when two nuclei are combined into one. In a presentation he made on fusion last year, Campbell referred to it as making a star on earth. The temperature and compression inside a star is so great that it causes nuclear fusion, and when this reaction happens, energy is released. The sun is a good example of fusion.

Fusion as a source of power offers the possibility of infinite clean energy. But the challenge has been finding a way to produce the controlled pressure and extreme heat – roughly 50 million degrees Celsius – needed to cause hydrogen isotopes to meld or "fuse" together in a laboratory.

The main entrance to the laser lab leads to a long rectangular lobby with oddly high ceilings. But that's because much of the interior is built around the large, three-story area housing the Omega lasers. It takes three flights of stairs to reach the viewing area.

The lasers are contained in a massive clean-room environment large enough hold a mid-size plane, and anyone entering the area has to suit up in white garment that's sealed from head to toe.

The high-powered lasers send pulses of light through tubing about 40 feet long. If you were to photograph a single pulse of light, Campbell says, it would be about three feet long.

At the end of the tubing is a container with tiny fuel pellets, usually made of deuterium and tritium, forms of hydrogen. The lasers are aimed at the pellets to heat them and try to cause a reaction intense enough to create fusion.

The process, which is referred to as inertial confinement fusion, is much more challenging than fission, Campbell says.

"One of my hobbies is history," he says. "If you look at the history of how nuclear energy is made, you'll see that in the 1930's, nuclear fission was discovered, and within three years you had nuclear reactors. Now, 20 percent of this country's electricity is made by nuclear fission."

But fusion as an energy source will be "a long time in coming," he says. "Anyone who says it's only 30 years away is probably smoking dope, because it is really, really hard."

And yet the need for clean energy is one of the most vexing issues facing world leaders. The shortage of energy is already a driver of regional conflicts. The world population is expected to grow from seven billion in 2010 to nine billion by the beginning of the next century, according to the Lawrence Livermore National Laboratory. And the demand for energy is going to increase precipitously.

Harnessing the power of fusion would lead to an abundant clean source of electricity without the dangers posed by current day nuclear fission reactors. It's no wonder that scientists in almost every advanced country in the world are in hot pursuit of what many refer to as the Holy Grail of energy.

Many of the scientists who rushed to the laser lab's defense with letters to Congress referenced its role in maintaining the country's nuclear defense technology. But they also emphasized that the lab has served as one of the most important training grounds for researchers in the highly specialized science of fusion, sometimes referred to as high-energy-density physics.

"Omega's closure would have irreversible and disastrous ramifications for maintaining the safety and reliability of our nuclear stockpile," Richard Petrasso, senior scientist at Massachusetts Institute of Technology's Plasma Science and Fusion Center said in a letter to Representative Joe Kennedy III (which was also published in the March 2018 issue of Science magazine).

"Such an action would be calamitous for the field and would largely eliminate, not only for MIT, but for all other universities, the training and education of Ph.D. scientists working in high energy density physics."

One hundred students are working on their degree programs at the laser lab, with 70 from various departments at the UR, such as optics, says Campbell. Another 30 are from other institutions like MIT and the University of Michigan.

"About 500 students have earned their PhD's from here," Campbell says, and they often went on to work in the national labs. "This is a major education facility for this field. I think this is specifically one of the most important things that this new administration and its leadership didn't know or understand."

Shutting down the laser lab could put the US at great risk, he says, and one of his biggest concerns is China and Russia's work in fusion research. "China especially is very, very interested in this technology," Campbell says.

The laser lab is in a league of its own when it comes to funding, receiving the single largest federal funding at the UR annually. The majority of its funding comes from the National Nuclear Security Administration, and the lab is among a handful of organizations in New York State to have a line item in the president's budget.

Moving forward, Campbell says the laser lab clearly needs to work on its public image, both in the Rochester area and in Washington, because many people, including some who control funding, don't really know what the lab does.

He's doing everything he can, he says, to make sure officials in the Trump administration and Congress know the importance of the lab and the work it does. The danger of closing has passed for now. But the fact that it was seriously being considered and that it caught officials at the UR and the lab a bit by surprise means there is a lot of lobbying to do.

"One of the problems we had was having a new administration that wasn't that familiar with the science that supports the NNSA," Campbell says. "We will be spending a lot of time in Washington, DC."