UR DREAMers plea for help 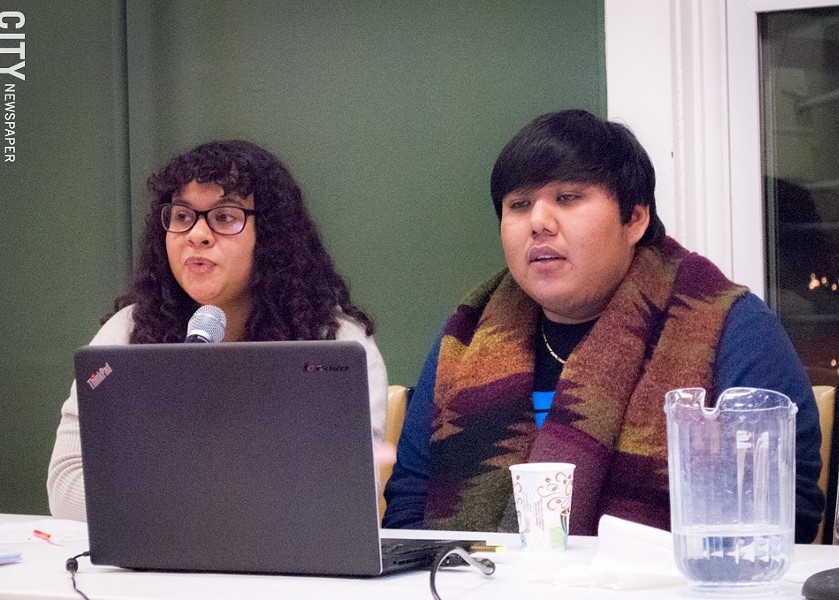 Raul Ramirez is an undergraduate student at the University of Rochester, where he's majoring in gender, sexuality, and women's studies. He hopes to go on to nursing school and eventually pursue a career in family medicine for the LGBTQ community, he says.

But his plans may get derailed.

Ramirez applied for Deferred Action for Childhood Arrivals, or DACA, and received permission to stay in the US. But the time he's allowed to stay in the country legally under DACA is going to run out before he graduates from the UR next year. Last September, the Trump administration put the country on notice that DACA – President Obama's executive order – would end in six months. That leaves roughly 800,000 young people, who were allowed to work and go to school here, at risk of deportation, including Ramirez.

At an event sponsored by the Rochester Committee on Latin America and UR DREAMers, an advocacy group he formed, Ramirez urged attendees to press Congress to pass DREAMer legislation that would allow undocumented children and their families to remain in the US without the constant threat of deportation. UR DREAMers is calling for a bill that eliminates funding for a border wall, border security, and interior deportation enforcement because it's overturning the lives of so many children and their families.

Ramirez traveled across the border with his mother from Mexico to Arizona when he was 3 years old. He doesn't remember coming to the US, nor does he remember the town that he and his mother left behind.

"I don't remember any of that," Ramirez said. "This country has always been home to me."

His biggest fear, however, is not whether he can complete his degree program at the UR. He's afraid that the Trump administration could use the information on his DACA application to deport his parents.

"The biggest concern I have is for my parents," he said. "I have the guidance I need to get through this, but I'm worried about my parents. The government has all of my information."

Many young people stepped forward trusting the Obama administration to treat them with fairness and compassion when they applied for DACA, he said in his presentation at the ROCLA meeting. But it's been difficult to predict the Trump administration's plans.

"Now you risk being penalized for coming forward," Ramirez said.

Ramirez estimates that there about 30 students attending the UR who are undocumented, but there is no exact count.

"The UR has been very supportive," he said.

He formed UR DREAMers to be a resource, cultivate allies, and reduce fear and confusion about DACA and DREAMers, he said.

Ramirez's concerns about the public's confusion are valid, Hannah Vickner Hough, a lawyer with the Legal Aid Society of Rochester, told the ROCLA audience. A combination of politics and rising anti-immigration sentiment has led to a lot of misinformation about the differences between DACA, DREAMers, and Temporary Protected Status, or TPS, she said.

"DACA is not a statute or law," Vickner Hough said. It was a "deferred action" policy, not a legal status that originated as part of Homeland Security in 2012. The rationale: children who were younger than 16 when they entered the US didn't generally come here with the intent to break the law. They probably had no say in the matter.

"It was only valid for two years, and you had to reapply for it," Vickner Hough said, it was always meant to be temporary, and it did not provide access to a Green Card or any immigration status," she said. Education is one of the requirements under DACA, not simply a benefit, as it's often portrayed. And young people must undergo a criminal background check and can be disqualified even for some misdemeanors, she said.

The Development, Relief, and Education for Alien Minors or DREAM Act is bipartisan legislation that got tied up in Congress and never got signed into law, which is why a frustrated Obama implemented DACA as an executive order. Both the DREAM Act and Obama's executive order allowed people living illegally in the US to obtain a Social Security number and a driver's license, so they can get a job to help pay for their education.

Temporary Protected Status, however, is a diplomatic program that applies to countries and is designed to allow people who are being displaced – usually due to war or natural disaster – to come to the US and work, Vickner Hough said.

And here's where things can get confusing and extremely complicated: It's not unusual for undocumented children to have a parent in the US under TPS.

"I come from a mixed family," UR DREAMer Haydi Torres said at last week's ROCLA event. "My father has TPS, and my mom is not documented. And I have two siblings that are US citizens."

Her father, who is here from Honduras, works in construction nearly every day. She recently took a photo of her father's hands as part of an art project about TPS workers. They were dry, callused, and outlined with painful looking cracks.

"He pays taxes, but my dad can't apply for welfare," Torres said. When TPS is granted to a country, it's often extended. "But you never know what's going to happen," Torres said. "My dad is very stressed out right now."

Slights and indignities are routine, and they're often rooted in ignorance and bias, Torres said. Not long ago when her mother, who doesn't speak English, was stopped by police while driving, Torres interpreted for her. But the officer immediately became angry.

"He said, 'I don't know anything about you,'" Torres said. "'I don't know if you stole this car or if you're carrying drugs.' He sees that this is a mother with kids in the car."

Torres was still upset the following day and went to speak with her school counselor, who said: "Your mother broke the law. Can't she go back to her country and come back legally?"

"I held back my tears," Torres said. "I know that it's hard to understand something that's happening to someone else, but not to you."