By Jeff Spevak and Rebecca Rafferty

PHOTO BY ASHLEIGH DESKINS The cast members of Unleashed! Improv present their version of the Rochester Fringe Festival's Italian circus tent at a performance on Sept. 15, 2021.
Unleashed! Improv’s exclamation point

What a bargain: For a mere $8, Rochester’s Unleashed! Improv offers a quick synopsis of any show at Rochester Fringe. Imagine! You only need to go to this one show — “Unleashed! Improv Presents: Other People’s Shows” — during the entire 12 days of the festival! This one! It’s all the exclamation points you need!

Playing for an intimate crowd of about 30 people (half of them were apparently denizens of the local comedy scene) in the 700-seat Theatre at Innovation Square, Unleashed! Improv comprises approximately six comedians whose home base is Blackfriars Theatre. The idea of “Other People’s Shows” is that the improvisers open the official guidebook to each of the entertainment genres offered — theater, comedy, etc. — and take a suggestion shouted from the audience as to which show to parody.

And from there, the audience participation gets even more real. For the show’s opening skit, the comedy group went in search of “a tall guy” to serve as the center pole in an unambitious recreation of the Rochester Fringe’s Italian circus tent at the intersection of Gibbs and East Main streets. Then they brought out a wild animal, because circus tents usually have wild animals. Since at that moment the cast portrayed Italians with fake mustaches and outrageously bad accents, tossing around meatballs, that wild animal was a large blue calamari. Fake, like the meatballs. 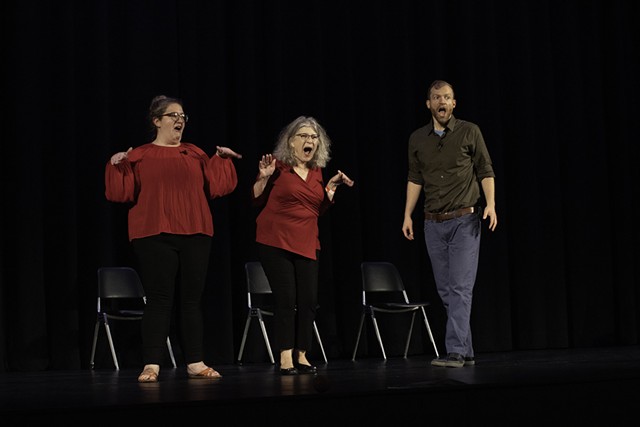 This was the group’s first live, on-stage performance in two years. Like all of last year’s Rochester Fringe, Unleashed! Improv’s show back then was virtual because of the pandemic. But Wednesday night, the group easily fell into a comfortable rhythm, playing off each other’s ideas almost seamlessly, like an evening of charades among friends.

Drawing from the Rochester Fringe guide Music section, someone in the audience called for Unleashed! Improv to take on “Naked,” a spiritual soul-pop show playing at The Spirit Room. Abby DeVuyst, also of the Fringe comedy duo Bushwhacked, helped turn “Naked” into a ballad of electrolysis regret, singing “I miss it all, I miss every single follicle.”

The Kids Fringe selection was a tragedy. Turning a venomous eye on “Mama G’s Story Time Roadshow,” a unicorn jabbed its horn into the eye of DeVuyst’s fairy. And Unleashed! Improv’s Comedy selection, “Lockdown Love Story” took a turn toward incest. Comedy? As one cast member noted, “I don’t know if we’ll be any good at that.”

And that’s it! Unleashed! Improv will do it again next Monday! That’s all you need! — JS

The Fringe show I saw on Wednesday night isn’t the kind that you’d think would prompt any sort of soul-searching, but it nevertheless left me realizing a thing or two about myself.

The thing I’ll fess up to is that I think I really need to lighten up. I should stop doom-scrolling on Twitter instead of sleeping, or at least indulge in more comedic art than I usually do.

“Bushwhacked Renaissance: Renew, Revive, Re-diculous" was just what the doctor ordered — cheap therapy on a gloomy Wednesday night. It was truly so nice to spend an hour engaging in something purely silly that had nothing to do with politics or the pandemic.

An original Rochester Fringe act from the start in 2011, “Bushwhacked” creators Kerry Young and Abby DeVuyst present new, themed shows each season. One of their 2021 shows is this Renaissance-era participatory comedy in which the creators, posing as ladies of a royal court, ask the audience to flex their artistic skills and “audition” for the position of the Royal Court Artist.

There’s another (sold-out) boozy iteration of this very show, but no matter — every couple or cluster of friends in the audience on Wednesday brought their own bottle or pint. Nothing is stopping any future audience from doing the same.

So, picture one of those ubiquitous drink-wine-and-paint classes where liquid courage enables folks to paint in front of others, but the class is being led by a cutie-pie improv comedy troupe that gently teases participants about their artwork and anything else they observe on the fly.

The ladies’ mute and so-called eunuch assistant, R'Dvark, helps guide the class while bashfully flirting here and there. We all loved it; he was an actual muse.

And muse-like, the guy who plays R’Dvark also moonlights as a distractingly self-absorbed model during a figure-drawing session that provided ample opportunity for the hosts to crack dick jokes — an everlasting crowd-pleaser.

I chose to attend a Bushwhacked show this year on a whim, and it was a good reminder that the face that balances that weepy one in the Sock-and-Buskin theater mask icon has a mile-wide, careless grin, even for a moment. Levity is cathartic, too.

And, sidenote: when I was killing time before the show in the pretty wine tent at One Fringe Place, sitting on an inadvisably snow-white couch and snapping pictures of the fluorescent paper lanterns against the purple storm clouds for the ’gram, I overheard a woman answer her phone and engage in a brief, failed conversation on speaker phone.

“Don’t you just hate it when someone calls but they don’t talk to you?” she asked everyone and no one in particular.

I made awkward eye contact and smiled, but wasn’t sure that I wanted to engage.

When she immediately had another speaker-phone convo that was winkingly sooo awkward to overhear, I realised she was doing a guerrilla-style bit, embedding herself to entertain folks like me who were between shows and just hanging out.

Whoever you are: nice job.

If you too are in need of a completely-divorced-from-reality bit of entertainment (and who isn’t?) there’s plenty of time to participate in “Bushwhacked Renaissance: Renew, Revive, Re-diculous.” The show goes on every day for the remainder of Fringe, details here. Tickets are $28 and the show is marked as appropriate for ages 13 and older. — RR


Tickets and a dream

The complete Rochester Fringe schedule is available at rochesterfringe.com. Go to “Find a Show,” create a list of events by date, venue and genres, then hit the “Filter” button. Tickets to each event are available at the web site, by calling (585)957-9837, or at the venue one hour before the start of the show if they are still available.

Jeff Spevak is WXXI's arts and life editor and reporter, and Rebecca Rafferty is CITY's life editor. Feedback on this article can be directed to dkushner@rochester-citynews.com.