Undeath slashes its way onto the death metal scene

PHOTO BY MELISSA SUAREZ Vocalist Alex Jones and guitarist Kyle Beam performing in the death metal band Undeath
Before the title credits even roll in the 2009 remake of “Friday the 13th,” all of the essential slasher-movie tropes come to fruition — teens tell ghost stories around a bonfire, they drink and smoke pot, they have sex in a tent, and a murderous madman hacks them to bits with a machete. It’s a breakneck pace that satiates horror fans’ hunger for gore.


The record is dense, brimming with brutal, guttural vocals from Alex Jones, incendiary guitar riffing from Kyle Beam, and Matt Browning’s pulsing drum rhythms. The 10-track LP coalesces in a rich cataclysm of sound, mercilessly gripping the listener from start to finish.

“We just had this idea that every song was going to put you right into it,” Browning said recently over a pale ale at Nine Maidens Brewing Co. The University Avenue brewery has released two beers, “Undeath” and “Acidic Twilight Visions,” in collaboration with the band.

“A lot of the newer metal bands, you’ll hear these like three-minute intros and ambient parts, and we hate that,” Browning said. “We just want to put you right into the middle of it.” 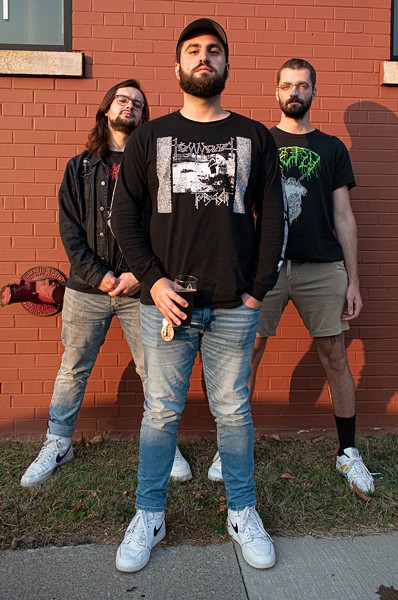 “Lesions of a Different Kind” is a major break for a group in its infancy that has played just a handful of live shows. Formed only last year, Undeath is a collaboration of Rochester metalheads who bonded over a love for extreme music and honed their sound in a few recordings that made their way online and caught on with like-minded listeners.

To put the band’s signing with Prosthetic Records into perspective, consider that the label has released works from underground metal icons like The Acacia Strain, Skeletonwitch, Gojira, and Lamb of God, the latter of which averages 1.7 million monthly listeners on Spotify alone.

On top of that, the band was featured in Rolling Stones' best albums of October, alongside big names like Bruce Springsteen and Ariana Grande.

The success came as a surprise to Jones. Undeath is the furthest he has ventured into extreme death metal, a direction he had wanted to go since his days in the post-hardcore outfit Druse and doom metal band Bone Mask.

“I honestly was expecting this to not go further than a demo project,” Jones said.


After Undeath put out its first self-released EP, “Sentient Autolysis,” in 2019, the world of metal took notice. Undeath’s first single on Prosthetic, “Lesions of a Different Kind,” the title track of the new album, features vocals from Trevor Strnad of The Black Dahlia Murder, one of the most influential modern death metal bands.

“He was one of our first supporters ever,” Beam said. “He is on the pulse — I feel like he knows every new band out there.”

The newfound attention is the culmination of baby steps to success for Undeath, most of which coincided with a global pandemic. To date, Undeath’s live performances have been regional, confined mostly to Rochester mainstays like Bug Jar and Record Archive. Prior to the health crisis, the band had been scheduled to tour internationally and hit 100 shows.

Even the band’s record release show was done virtually, from Songbyrd Music House and Record Cafe in Washington, D.C.

“We had a full 45-day North American market tour we were supposed to do. We were going to hit every major city before it came out,” Beam said. “On one hand, it sucks. But on the other, I can’t really imagine a world where it could be doing better.”

In the time saved from not touring, the members of Undeath have nearly completed a second album, and they’ve added a bassist in Tommy Wall and a second guitarist in Jared Welch.

Death metal is music that revels in gratuity, obscenity, and pushing the boundaries of good taste to extremes. In the case of Undeath, Jones’s near-demonic vocals coupled with song titles like ‘Kicked in the Protruding Guts” or “Chained to a Reeking Rotting Body” may leave the uninitiated running for the hills.
But for Jones, death metal and all its trappings are meant to be absurd.


There’s an inextricable link between horror movies and death metal, beyond the aesthetics of carnage and chaos. Classic slasher films, like “Friday the 13th,” have barebone plots and play out with tongue planted firmly in cheek. Raunchy teenagers are little more than cannon fodder, creative murders are punchlines, and mass murdering lunatics become lovable series icons.

In this world, gratuity and silliness are not bugs, but features. So it is with death metal.

“What we do is just like the best horror movies,” Jones said. “There’s so many horror movies right now that take themselves so seriously, and end up being dumb in a really smart way. But what’s lost is that those old movies are very clever. They’re smart in a dumb way.”

Undeath strives for “smart in a dumb way.” The goal is to record songs that are thematically absurd, but seamlessly crafted and teeming with musical prowess.

The lyrics on “Lord of the Grave,” the sixth track on “Lesions,” “I hear their screams and smell their reeking, rotting corpses,” are sung — or growled — over intricate melodies played with impressive technical skill. On “Acidic Twilight Visions,” the album’s fifth track, Beam fills an interlude with rapid, pinched harmonic squeals on the guitar, marching in rhythm to the pounding of Browning’s drums.

Undeath has no expectations of breaking into the mainstream music scene. Just like the best of slasher flicks, death metal is crafted for a cult following.

“I think a lot of people may be put off by the vocals, or the speed, or the heaviness of it,” Jones said. “And you know what, that’s okay — maybe this isn’t for you.”