January 29, 2021
Death is present in practically every moment of Ukrainian director Valentyn Vasyanovych’s “Atlantis.” This fact (as well as the deliberate pacing) doesn’t make the film an easy watch, but for the patient viewer, there are rewards to be found.

Ukraine’s submission for this year's Academy Award for the Best International Feature Film (though it failed to make the final shortlist of 15 titles in contention for the prize), the film is undeniably bleak, though by its final moments even its desolation gives way to a faint ray of hope. 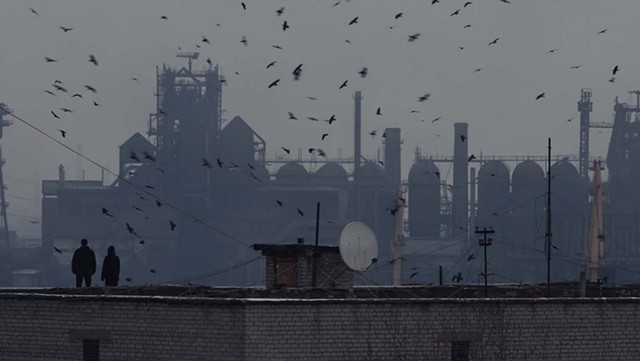 The film is set in a bombed-out Ukraine of 2025, in the aftermath of Russia’s currently ongoing war against the country. The narrative plays out against the landscape of a country left in societal and ecological ruins. It’s here that PTSD-suffering former soldier Sergiy (Andriy Rymaruk) struggles to make some sort of life for himself.

After the steel plant where he works is shut down, Sergiy meets a humanitarian activist named Katya (Liudmyla Bileka). Their encounter inspires him to volunteer for Black Tulip, the organization she works for, which exhumes the bodies of the many nameless fallen soldiers who were left behind, and works to identify them and provide them with a proper burial.

Beyond these broken individuals we meet, we see how the environment has been poisoned and human life has become desperately undervalued. Favoring mood over narrative, Vasyanovych plants us firmly in Sergiy’s despondent state of mind. The former soldier is in mourning for his country, the people he once knew, and a way of life that no longer exists.

We observe the lingering damages and costs of such wars, as Vasyanovych chronicles the long, arduous process of Sergiy making his way back to any semblance of humanity. And the film suggests that the only hope lies in the characters’ fumbling attempts at human connection.

Vasyanovych acts as writer, director, editor, producer, and cinematographer, leaving no question this is a singular vision brought to the screen. There’s a desolate beauty to his images; he fills the frame with muddy browns and murky grays, making the occasional pops of fiery red and orange stand out. The vast widescreen compositions focus on harsh, industrial landscapes that dwarf the characters.

The scale of the environments can sometimes make for an odd moment of deadpan humor. There’s an indelible, extended scene observing Sergiy as he fills up the rusted-out bucket of a construction excavator with water, then sets some gasoline soaked wood ablaze to heat it up and take a bath. The simple comfort is a strange sight when juxtaposed against the scorched landscape.

Throughout the film, we’re kept at a remove. Close-ups of characters' faces are rare, and the action is almost entirely filmed in static shots, unfolding in long takes before moving on to the next scene. This aesthetic often makes for a cold and alienating film, deliberately dwelling in that chill until gradually introducing the faintest ember of warmth.

Despite the grim subject and setting, “Atlantis” isn’t despairing. And its tentative hopefulness somehow makes it all the more touching. It seems to be the work of a man weary from years of watching his homeland torn apart by forces that seek to destroy it, longing for a time when all that pain might finally come to an end.

Adam Lubitow is a freelance film critic for CITY. Feedback on this review can be directed to Rebecca Rafferty, CITY’s life editor, at becca@rochester-citynews.com.