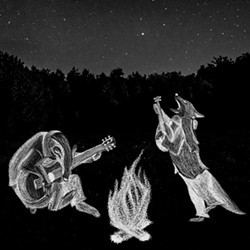 Two Truths isn’t afraid of making a grand entrance. In September, the Rochester-born electro-folk outfit released a powerful music video for their single “Brushstrokes,” which has accumulated nearly 18,000 hits on YouTube. The band’s debut EP “Electric Campfire” continues to build on that momentum, infusing unexpected musical influences with anthemic structures.

The four-piece group is the creation of musicians Garrett Mader and Jonathan Blake (also known as Blake Pattengale and Redbeard Samurai), who became roommates during the winter of 2020. After the dog days of quarantine began to ease, the group brought in keyboardist Max Greenberg and the eclectic drummer Byron Cage to round out the band’s sound.

“Brushstrokes” kicks off the EP, telling the story of an older artist who wistfully remembers his former lover through his paintings. The arrangement of the song is clever and unanticipated, combining artful plucking on the mandolin with brisk electronic drum beats.


The EP’s second song, “Chasing,” starts off with vocal tone and lyrical phrasing similar to that of ’70s folk groups like Crosby, Stills, Nash and Young and America, but the harmonies are more toned-down, favoring minimalism over grandiosity.

Two Truths have a knack for chiming in with the unexpected. As “Let It Show” progresses, a harmonized acoustic guitar part builds a sound akin to Nick Drake’s seminal album, “Five Leaves Left.”

On “Electric Campfire,” Two Truths successfully walks a fine tightrope between the musical past and present.