February 19, 2020
No square on the calendar seems to have escaped. “Extraterrestrial Abduction Day” is March 20. Entire months have been claimed. November is NaNoWriMo. Translation: National Novel Writing Month. And now we’re in the midst of FAWM: February Album Writing Month.

We can all agree that Hemingway didn’t need an artificial deadline to create “The Sun Also Rises” and “A Farewell to Arms.” And it doesn’t seem as though Sarah Eide and Kelly Izzo Shapiro need much prompting, either. Eide, who moved from Chicago to Rochester about one and a half years ago, has released three albums under her own name, collaborated on another album with the poet Jennifer Jean, and has scored music for film and video games. 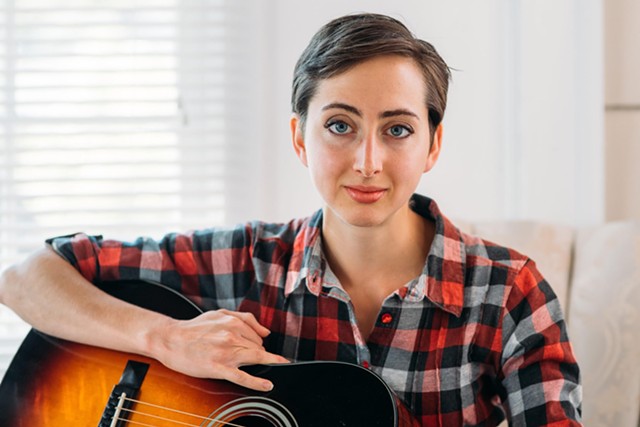 Shapiro, who was raised in Brockport and now lives in Brighton, challenged herself a few years ago to write a song a day. She’s up to 4,000 songs total.

Yet both Rochester musicians are committed to February Album Writing Month. Working through the website fawm.org, songwriters are challenged to write 14 songs in February; they’re getting a little extra time, since it’s a leap year. As each song is written, a demo is posted on the website. There are chat groups. Feedback from other songwriters. Opportunities for collaboration. And when writer’s block sets in, the site provides little brain teasers, or prompts.

“It feels kinda like I’m in a playground, you know,” Eide says. “Like I can be a kid and just write something and not worry about how good it is, or what the message is, or anything like that.”

Eide has a song, “Pour Over Me,” that was born in a previous FAWM year. When she releases it on February 24, it’s growth will be evident.

“When you hear the demo that I made for FAWM, it’s the same song, but it’s taken on a life of its own,” she says. “So FAWM to me is sort of, in a lot of ways, about creating little baby songs…”

“Just sketches,” Eide says, picking up the thought. “And they’re super special and super interesting, but seeing how some of them — not all of them, many of them probably don’t — but some of them grow up to be these fully produced recordings that people from all over end up hearing and appreciating. It’s just really cool to see that transition.”

“I’m writing about, specifically about, my daughter, who is going to be born in August,” she says. “I’m trying to make this whole album about thoughts about her. So she knows sort of where I was when she was being created.”

FAWM prompts aside, the albums being written by Eide and Shapiro are not line after line of non-sequiturs. These are concept albums. Shapiro, anticipating the birth of her daughter. And Eide anticipating…

“I don’t want to give too much away,” she says, before proceeding to do just that. “It’s basically about extinct and nearly extinct species.”

One of Eide’s previous albums was influenced by motherhood and personal growth, “the difficulty of being a young mom, and choosing a career as music,” she says.

Personal challenges that Shapiro’s new collection of songs might detail as well, with an additional layer. “This pregnancy has been very complicated,” she says, “so kind of what prompted me to write these songs is to let her see how optimistic I was trying to be during a time when things were really stressful. So I guess the theme is just trying to be positive about a very difficult situation.” The situation has stabilized. “Every week that goes by is, like, a little bit safer,” she says.

Eide and Shapiro met at January’s “If All Rochester Wrote the Same Song” concert, where almost two dozen songwriters presented their versions of “No One Will Ever Know” at Hochstein Performance Hall. Besides getting a song into the event, Eide played keyboards in the house band, and told Shapiro about February Album Writing Month. The timing, considering Shapiro’s pregnancy, was perfect.

“It’s actually been amazing to have this project to work on,” she says, “because when I first found out that there were some complications, I was kind of taken aback and didn’t know what I was going to do with myself. And so Sarah was like, ‘Oh yeah, you should do this thing.’ And I was like, this is the perfect distraction.”

And, she adds, “I thought if I can build something for her, it would be a great way to express love.”

Shapiro’s music can be found at kellyizzoshaprio.com. Eide’s music is at saraheide.com.