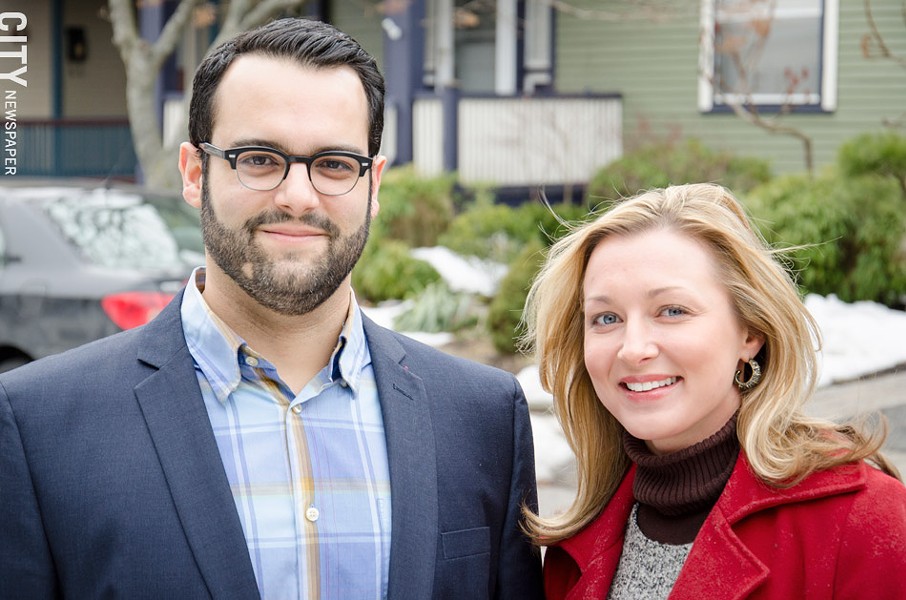 PHOTO BY MARK CHAMBERLIN Michael Brown and Ana Liss: Rochester "gives us the opportunity not just to live in a place, but to work for that place."

David Brooks made us mad. He did it in his January 24 New York Times column, "The Great Migration." He did it by high-fiving the demographic group we belong to while dissing the kind of city we call home.

Brooks argues that American higher education "sucks up some of the smartest people from across the country and concentrates them in a few privileged places." Freshmen may arrive at Ivy League dormitories from sleepy second-tier cities or small towns, but by the time they depart with degrees, they have been intellectually and culturally transformed such that only a life in Washington, San Francisco, or Boston is possible for them.

"They learn how to behave the way successful people do in [these] highly educated hubs," says Brooks. "There's no economic reason to return home, and maybe it's not even socially possible anymore."

In short, these young folks are ready to take their place among the economic, political, and cultural elite. They may return for Christmas. They may gather at bars to watch the sports team from back home. They may even linger over a vision of retiring to the place they grew up – on particularly hard days in what Brooks calls "the relentless quest for distinction." But these are visions indeed, for Brooks' column makes clear that there is only one reality: the inexorable, inevitable, and ultimately desirable tectonic shift whereby ambitious, credentialed, and creative people move to a few large cities while leaving behind communities that are fated to wither and die.

Brooks might have saved several thousand keystrokes by simply declaring: "The strong cities will survive, and the weak shall perish – as they must!" For he is at bottom a Social Darwinist of place, whose admiration for this process is palpable. Brooks echoes Charles Tiebout's theory of municipal sorting, which posits that individuals use their freedom of choice and unique sets of values to move from one place to another until they find the one that maximizes their personal utility. But the Tiebout hypothesis came up against criticism for ignoring the importance of pride of place, of family roots, and of cultural connectedness. These kinds of benefits accrue despite the presumed career booster of choosing a place like San Francisco over Flint, Michigan, for example.

Urban theorist Richard Florida responds to Brooks in a January 30 contribution to The Atlantic's "Cities" called "More Losers than Winners in America's New Economic Geography." He doesn't contest the account that Brooks offers or that Tiebout might, but he does dwell upon its downside. Florida shows that talent clustering in large metropolitan regions contributes to economic inequalities because the benefits of such clusters "flow disproportionately to more highly-skilled [...] workers." The considerably higher cost of living in knowledge-based metros is only offset by the income gains that the most highly paid workers in those areas receive. Less affluent folks are either priced out of the hub cities or are forced to stay there and take the hit in real income.

While Florida warns of the costs of the "Great Migration," Brooks sees it as something akin to Joseph Schumpeter's "creative destruction." The lifeblood – in the form of smart kids – from the wayside places must be drained so that it can feed the thumping heart of our biggest cities, which pump out the innovations that power our society. Brooks honors this process as "meritocratic," one that allows the talented to become part of the "positive ecology" of large cities, where productivity is raised to a fever pitch.

Such thinking stood behind Brooks' appreciation of Mitt Romney, just as it stood behind the work Romney did at Bain Capital. Romney's business model at Bain was to pick apart smaller companies, salvaging the divisions or assets that held market value while consigning the rest to unemployment statistics and bankruptcy courts. Some defended this practice on the grounds that it made the overall economy a leaner, meaner, productive machine.

Now imagine Bain buying a small city instead of a small company. They fly in and extract the top 10 students from each high school, choppering them off to elite colleges and leaving the rest of the inhabitants to ultimately become recipients of the federal government's redistributive largesse. (A major claim in Brooks' column is that the Obama administration has embarked upon a fool's errand to prop up the losers in our society – whether these losers are people or places. As he concludes, "meritocracy is overwhelming the liberal project.")

We read Brooks from a peculiar vantage point. In one sense, we're the people he's writing about. We grew up in the suburbs of Rochester, and we were indeed vacuumed up by elite universities: Cornell, Penn, and the London School of Economics. We earned postgraduate degrees and we lived in big hub cities.

But then we did something that Brooks' thinking has no capacity to compute: we chose Rochester.

There were many reasons to make that call. We wanted to be with our families and to enjoy them. We wanted to enhance the quality of our lives, even if it cost us in quantity of status or power. We felt that Rochester did indeed have the "positive ecology" that Brooks and Florida envision in only a few key cities: opportunities for creative engagement, cultural ferment, and entrepreneurial innovation. And we thought it had an enriched ecosystem beyond what the hub cities might offer: a blend of compelling history and architecture with the palpable and beautiful presence of the natural environment. It has all of this at a dramatically lower cost of living, a cost of living that allows one to take risks – because you can take a risk and still make rent.

Most crucially, we were attracted to Rochester by the presence here of thoughtful, committed people who share a sense that attaching their lives to the fate of their community is not something to be done out of duty; it is something to be done as a means of personal fulfillment. Rochester holds out a set of civic possibilities for us. It gives us the opportunity not just to live in a place, but to work for that place. It's our hometown, and we'll be damned if we're going to let it go extinct.

Brooks says that the culture of meritocracy "encourages you to go anywhere on your quest for self-fulfillment." We are on a quest too, even a quest for self-fulfillment. But we know that a fully realized life is one that includes a sense of civic participation, one that makes room for commitment to community. We each faced turning points in our lives where we had to decide whether to explore these ideals or abandon them, whether to continue rising in the "relentless quest for distinction" or to become relentless in our determination to forge a different path. We chose the second course, and we believe that there are millions like us who have done the same.

What do these millions mean for Brooks' "Great Migration"? Well, one meaning is obvious: that unlike migratory birds, migratory human beings have a choice. We can allow our lives to conform to the large patterns in our society, until those patterns take on a sense of inevitability, or we can recall that every large pattern is, at bottom, a composite of countless human decisions. If we make different decisions, we have the power to change the pattern. Once we realize that the "Great Migration" is no longer inevitable – and it's certainly not – then we must ask, is it desirable? We've found an answer to that question for ourselves; we hope others will join us.

Michael Brown and Ana Liss are the past and current presidents, respectively, of the Monroe County Young Democrats. Brown is earning his PhD. in history at the University of Rochester, studying the place of intellectuals in American political culture. Liss holds an MPA from Penn and works as a researcher for the Greater Rochester Enterprise.