by Jeremy Moule and Brett Dahlberg

January 28, 2020
East Main Street between North Goodman Street and Culver Road is just under a mile long. Its pothole-riddled pavement is too wide for pedestrians to easily cross, yet on-street parking and tight travel lanes can make cyclists feel unsafe and uncomfortable. 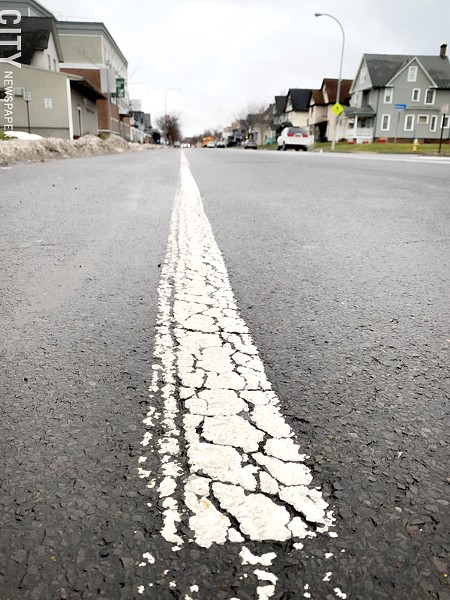 Later this year, the city will begin a $25 million project to resurface the East Main stretch. One-way protected bike lanes will be added on each side of the road and the pavement will be narrowed in some spots.

The project has been in the works for a while, but city officials recently revealed some unexpected tweaks during a public meeting last week that jarred residents and cycling advocates who thought the city had already settled on the design. The changes are limited to the block between Palmer and Mustard streets.

Jones said City Council needs to approve the plan, but he doesn’t foresee any changes between now and then.

Dorothy Parham, president of the EMMA neighborhood association, argues that even with the changes, the city’s project is taking away too much car parking and replacing it with too many bike lanes.

“Everybody don’t ride bikes,” said Parham, whose neighborhood borders the corridor. “The vast majority of them drive. I feel there should be spaces for those that drive.”

Kyle Crandall, the president of the Beechwood Neighborhood Coalition, just across Main Street from Parham, said he’s supportive of the bike lanes. But he’s as miffed as Parham about the changes from the last iteration of the plan.

Cycling advocates, who’ve been urging the city to build bike lanes along all of Main Street, want the city to take public input on the new design.

“It’s definitely an improvement over what’s there now, but it’s a step backward” compared to the previous design for the project, said Brendan Ryan, a board member of Reconnect Rochester, a mass transit advocacy group.