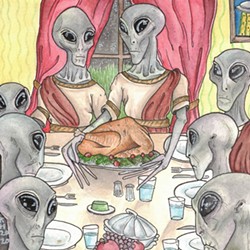 Ska music holds a special, sentimental place in my heart. It wisks me back to my high school days, when punchy horns and bouncy bass lines formed the soundtrack to my sunny yet naive outlook on the world .

“Habits of the Average Degenerate,” the debut full-length album from Rochester ska outfit Turkey Blaster Omega, released on June 17, pairs the customarily upbeat music with angsty lyrics about finding oneself.

The band boasts tight arrangements, but its collective performance is held together by charismatic vocalist Katie Mangiamele, whose pop-punk melodies and spunky delivery sell the songs.

On “Wish I Knew,” Mangiamele’s earnest lyrics underscore the frantic energy of the band behind her as she sings, “My mind is far away and my spirit starts to break/ The only light that I see is from the girl that I want to be.”


Mangiamele and company reluctantly embrace the sappy side of romance with the plainly titled, “Love Song,” as the singer manages to sound both irritated and elated:

“Oh, you’re the sweetest soul I ever met, and I swore I wouldn’t do this shit again/ But here I am, and there’s something in the air/ If I’ve fallen and I won’t get up/ It’s kind of gross, yeah, it’s cheesy as fuck/ But at this point I don’t even care.”


Turkey Blaster Omega describes itself as “fourth-wave ska.” But with the band’s indebtedness to punk music, I don’t hear the evolution past the third wave. That’s not to say its music misses the mark. Although fourth-wave moments of relaxed psychedelia are nearly non-existent on “Habits of the Average Degenerate,” good vibes are plentiful, especially on songs such as the relentless, punk-addled “Alive to Survive,” which first appeared on the band’s 2020 EP “First Contact.”

Silliness rules the day on tracks such as the instrumental “Spaghetti Feet” and the closer “Mozzarella Sticks,” which extols the virtues of the popular barroom appetizer before the band gets roasted by an unnamed comedian. “Have you ever had an actual audience?” he asks.

Inane moniker aside, Turkey Blaster Omega most definitely has an audience, and “Habits of the Average Degenerate” succeeds because it tempts listeners to experience the music’s full effects live.