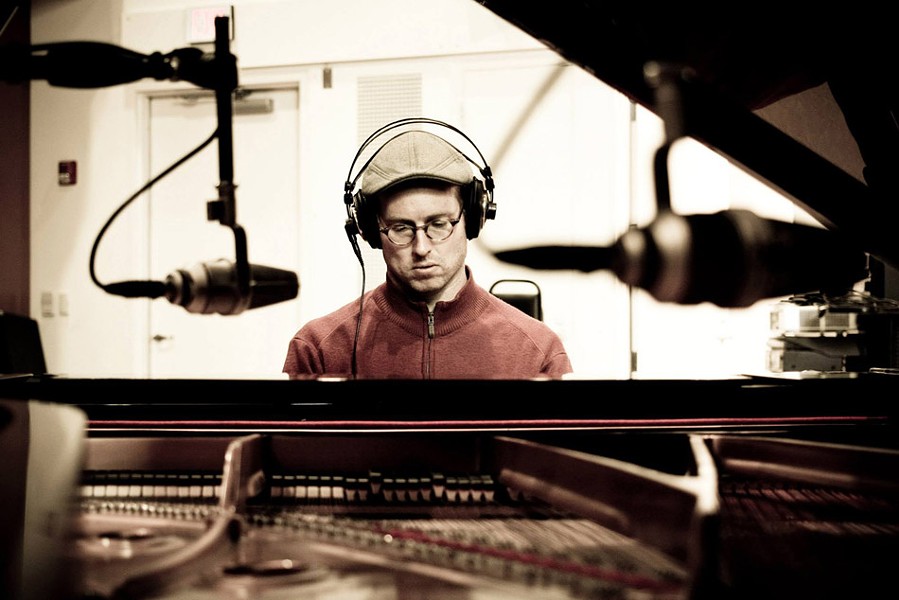 Aaron Diehl Aaron Diehl turned more than a few heads with his gorgeous keyboard work when he played last year's XRIJF with Cecile Mclorin Salvant. This year Diehl will have more opportunities to showcase his superb technique and lyrical style when he takes the spotlight in solo and trio concerts. (RN) aarondiehl.com

Cloudmakers Trio Jim Hart's four-mallet attack on the vibraphone is perfectly matched by the furious approach of drummer Dave Smith and bassist Michael Janisch when the London-based Cloudmakers Trio takes the stage. One of the hottest young bands on the British scene, the energetic trio propels the jazz tradition into the future. (RN) cloudmakerstrio.com

Dirk Quinn Band An early love for classic rock gave way to a new appreciation and interest in the jazz world for Dirk Quinn. His band's interplay and high energy has proven capable of experimentation as well as accessibility. (NP) dirkquinn.com

Fred Hersch After graduating from the New England Conservatory of Music in 1977, Fred Hersch was enlisted to tour with greats like Stan Getz, Joe Henderson, and Art Farmer. Among his four dozen albums as a leader are tributes to Billy Strayhorn, Bill Evans, Thelonious Monk, Rogers and Hammerstein, and Antonio Carlos Jobim. Whether he's playing standards or originals, Hersch is among the most lyrical stylists in jazz. (RN) fredhersch.com

Gary Clark Jr. Born and raised in Austin, Texas, Gary Clark Jr. completely caught me off guard when I saw him at the party in the parking lot a few years back. His guitar was big and bad and his singing more of a seething incantation than your stock blues wail. He's mild mannered off stage but a 10-foot-tall wall-o-blues on stage. He's is destined to be the next guitar god in our midst and the heir apparent to SRV. This is my pick for best show of this year's fest. (FD) garyclarkjr.com

George Colligan Pianist George Colligan has a solid reputation as a top sideman with Cassandra Wilson, Don Byron, Jack DeJohnette, and others, so it's no surprise that he has emerged as a star in his own right. Colligan is a brilliant pianist, displaying dizzying chops and a superb sense of adventure on every excursion. He's also an excellent composer. (RN) georgecolligan.com

Harry Allen Quartet I don't know why this cat hasn't already been nick-named Mr. Mellow. Allen blows relaxed and chilly while maintaining a vibrant swoon and swing in the room. Born in Washington, D.C., Allen has played with everyone — no list, I mean everyone. Just dig him playing "Cry Me a River" and you'll see what I mean. (FD) harryallenjazz.com

Holly Cole Known as much for her twist on Mr. Waits material as her own noir nuggets, Canadian songstress Holly Cole is a gem that sparkles brightest in the wee small hours. Whereas many jazz singers interpret around the pylons set in place by a tunes composer, Cole weaves in and out of the places left uncharted with a velvety touch that'll slug you like a hammer. She's simply amazing. (FD) hollycole.com

Jimmie Highsmith Jr. After studying at Rochester's School of the Arts, Jimmie Highsmith Jr. joined the US Air Force and formed a jazz band to play USO events. The experience served him well. Since returning to Rochester in the early 1990's, he's recorded four albums of smooth jazz mixed with a healthy dose of funk. (RN) facebook.com/The.JimmieHighsmith.Experience

Julia Hülsmann Trio Julia Hülsmann is well known in Germany as one of the most brilliantly introspective pianists playing today. She has occasionally collaborated with singers like Theo Bleckmann, but she is also known for her instrumental work with a repertoire that stretches from her own sensitive compositions to covers of tunes by greats like Kurt Weill, Nick Drake, and Randy Newman. (RN)

Kenny Werner Kenny Werner attended the Manhattan School of Music with the intention of becoming a concert pianist. But he took a detour, transferring to the Berklee School of Music, where he focused on jazz. Since the mid 1970's, Werner has brought his distinctive piano style to concerts and recordings by Jaki Byard, Joe Henderson, Tom Harrell, Chico Freeman, and Joe Lovano. (RN) kennywerner.com

Interzone Formed out of a need to play music free from the constraints of rules or "forced complexity," Interzone is made up of three of Austria's most exciting young musicians who have consciously decided not to play with any chordal instrument in order to maintain the musical freedom which they strive for. (NP) laubrecords.com/interzone

Rob & Trey Rob Ickes has been playing bluegrass and Dobro music with his popular Blue Highway act for more than years, and a chance brush with Trey Hensley's vocals led to collaboration. Their resulting record, "Before the Sun Goes Down," aims to be a breath of fresh air to the traditional music scene. (NP) robandtrey.com