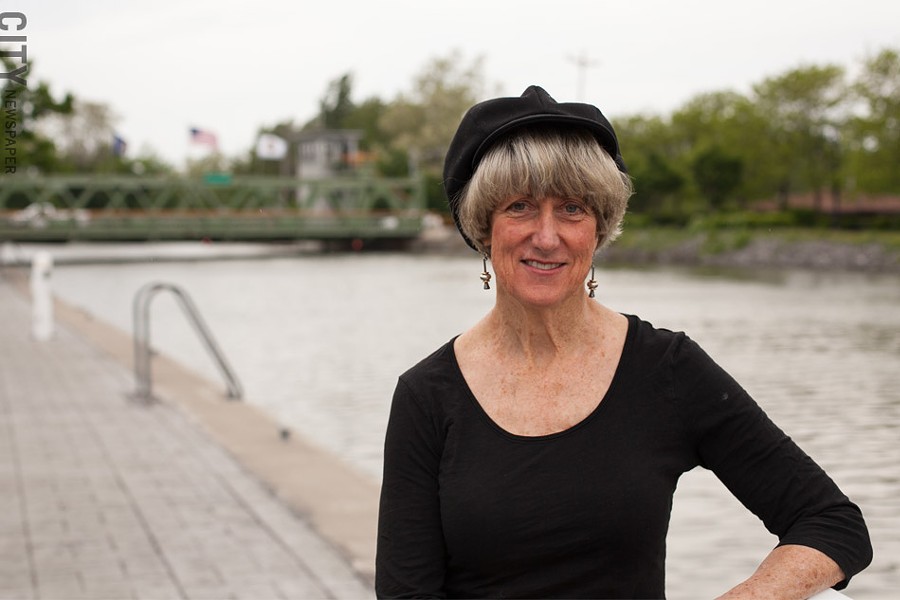 PHOTO BY MIKE HANLON Margay Blackman, a Brockport trustee, is running for village mayor. She planned a five-day festival to celebrate the 2013 opening of the Erie Canal (also pictured).
[UPDATED JUNE 12] An Ogden town justice has dismissed the criminal charges against Castañeda. She still faces Village of Brockport code violation charges. Original story: Mayor Castañeda's responses were submitted via e-mail and, because of her legal situation, with the approval of her lawyer. Her replies are excerpted here.

The Village of Brockport has three "problem" relationships stretching back years and seemingly impervious to reconciliation. They are the relationship with its police department, with SUNY Brockport, and with the landlords who operate in this picturesque western Monroe County village.

All three have twisted together to form the narrative for this year's village election, which is on Tuesday, June 18.

But whatever issues you think might be relevant in a village election — capitalizing on the canal, beautifying Main Street — Brockport's current political scene is primarily about one subject, and that's Castañeda herself.

The mayor was arrested and "charged with 14 counts of official misconduct and two counts of falsifying business records stemming from the alleged illegal rental of rooms at her home in the village," writes Kristina Gabalski in the May 26 Westside News. The rooms allegedly housed students from SUNY Brockport.

Castañeda has pleaded not guilty and says her arrest was politically motivated with the intention of ousting her from office "and to intimidate others like me [who] are concerned about the high cost of living in the village."

But Castañeda's critics, who include at least two members of the village board, say the mayor is working a not-so-secret agenda to dissolve the village.

Castañeda has also called for a public vote on whether to keep the police department, and urged the village to apply for a state grant to study consolidation of resources, with an emphasis on dissolution, Andrews says.

Via e-mail, Castañeda said her opponents are trying to control her platform and that only Brockport residents, not the mayor, can decide whether or not to keep the village intact. She said her priority is sound fiscal management and affordable and efficient government, pointing out that Brockport has the highest tax rate of any village in Monroe County.

Regarding the police department, Castañeda said she'd love to offer residents an abundance of services, but that ignores the fiscal reality.

"How much longer can residents afford to pay about $100,000 a year plus benefits to police officers?" she said. "How long before this cost plus the retirement costs crush the village financially?"

The village was on the receiving end of a tough state audit a few years ago. But Trustees Andrews and Blackman say the village has bounced back and is now on solid financial footing. They credit several measures with contributing to the village's recovery, including the hiring of a grants writer, and collecting on delinquent, unpaid parking tickets.

"Everybody agrees the finances are much better," Blackman says.

You'd think the tumult around Castañeda's legal issues and the forthcoming elections would make for some raucous village board meetings, but Blackman and Andrews say village business is proceeding relatively smoothly.

One exception, they say, is the vacancies on village boards and committees. The way the process works is that the mayor nominates, and the village board approves.

Andrews and Blackman say there are times the boards lack the necessary quorums to conduct business.

"We work around it, but it's not a very good situation," says Andrews, who is also on the village's Historic Preservation Board.

Trying to get to the bottom of the vacancies turns into a he said, she said muddle. Castañeda says she has nominated many competent candidates, but the village board rejects them. She says her political opponents are trying to stack boards and committees with their allies. But Castañeda's opponents and critics make the same argument about the mayor.

The tension may have a small impact on village business, Andrews and Blackman say, but it is affecting village life. Brockport seems to have had more than its share of scandal, they say, and people are weary.

"I certainly get it going door to door," Blackman says. "Sometimes I get the sort of leftover stuff, 'Ah, I'm fed up with the village board.' And I'm thinking, 'I don't think you've watched village board meetings for a while.'"