'Trust, but verify' chronicles the era of misinformation 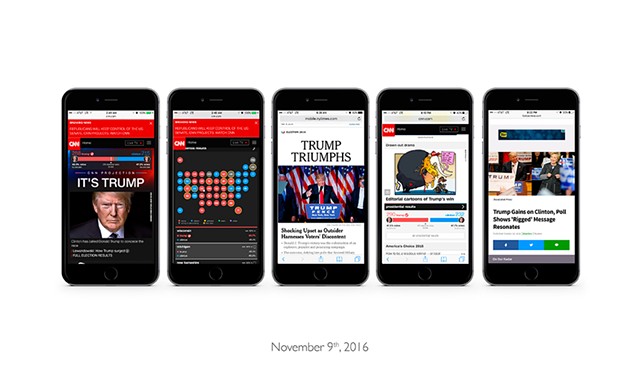 Taking in photographer Eric Kunsman’s “Fake News” project, now showing at the Rochester Contemporary Art Center, it is tempting to imagine his muse was the countless outlandish statements uttered by the president who popularized the term.

But the inspiration hit in 2016 when his first-grade son Bryce came home from school and announced that he might vote for Donald Trump in a mock election. “Hillary’s gonna make China great again,” Kunsman recalls his son saying.

That simple, innocent statement would send Kunsman down a convoluted rabbit hole of political discourse. He picked up his phone and took a few screenshots of CNN’s website to show Bryce how a mainstream news site might report election issues. In the days and weeks that followed, Kunsman began adding screenshots from ABC, Fox News, The New York Times, and The Washington Post.

It snowballed into a Mount Everest-sized obsession that is now one of three projects to make up the “Trust, but verify” exhibit on display at RoCo.

Sprawling along one wall of the East Avenue gallery is Octavio Abundez’s “A Fake History of Humanity.” The Mexican artist has created a series of tiles etched with dates accompanied by milestones of misstatements — sometimes just slightly altered, sometimes outright lies. There is the slaying of the last unicorn. Another tile reads, “Kellyanne Conway opened a portal to a parallel dimension on live television.” On Oct. 8, in the year 2,445,109 BCE (Before the Common Era), “The first-ever lie ever told was believed.” Who knew?

On the far wall at RoCo is “Big Dada,” by Bill Posters and Daniel Howe. It is simply a large television screen showing celebrities endorsing a fictional, for now, soul-draining corporation called Spectre. “I really enjoy the power of manipulating people for money,” Kim Kardashian says. But not really.

Howe, a New York City artist and computer scientist, and Posters, an English artist whose work seems to be a contemporary version of the manipulative arts of George Orwell’s “Nineteen Eighty-Four,” are demonstrating deep-fake technology — software that will very shortly make it impossible to tell if videos are real, or created on a computer.

But Kunsman’s exhibit is different. Because it is real.

“Fake News” is currently five massive books. And it is growing as you read this. Mounted on each page are three to six screenshots from Kunsman’s phone, all documenting the day’s news — every day. Volume One begins with Trump’s election and runs through his first year in office. The second volume picks up from there and goes until 10 days following the release of the Mueller Report.

“I assumed the next volume would be from that up until the next election,” Kunsman says.

“COVID hit and all heck broke loose,” he says. “Instead of doing the very first screenshots of the day for all the news channels, I had to scroll down because of how much was going on between COVID and the election.”

So Volume Four is just March and April of 2020 and runs 950 pages. “March 2, that really seemed to be a turning point for me,” Kunsman says. “The news was changing hourly.”

Kunsman is a lecturer in Rochester Institute of Technology’s Visual Communications Studies Department at the National Technical Institute for the Deaf, and an adjunct professor for the School of Photographic Arts & Sciences. He is also a photographer and book artist who owns Booksmart Studio, a book-publishing studio in Rochester.

But he is now consumed by “Fake News.”

An average now of 200 a day. Each page of the bound volumes can hold the images of six phones. On the newsiest day, there could be 15 pages of screenshots.

“Those books, they’ll kill somebody,” Kunsman says of the five volumes of “Fake News.”

Kunsman says he took pains to present his screenshots as a document of how each news outlet conveys the news. He contends “Fake News” is not passing judgment on their points of view, but rather chronicling their priorities. 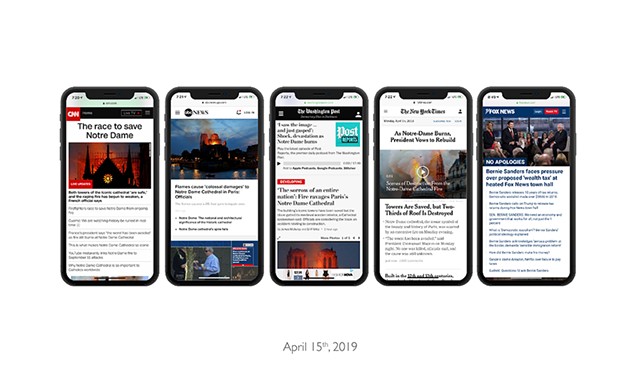 On Apr. 15, 2019, for instance, the burning of Notre Dame Cathedral was the top story of every news organization, except one. Fox News was focused on Bernie Sanders.

“That was fairly revealing to me,” Kunsman says. “It all revolves around what’s going on politically. Even if it’s the forest fires, there’s some kind of statement either by Biden or Trump.”

He is simply aggregating the day’s news and putting it out there for debate. To that end, Kunsman is planning what he calls “Unglued Re-broadcasts,” in which anyone on social media will be encouraged to take images from “Fake News” and pin them on the internet.

“For me, this is not just about the books,” Kunsman says. “It’s also about making sure people have free access for the future. I’d love to get the books into different archives, different universities, but I also plan on every page lingering on.”

Kunsman intends to post all of it on a web site, fakenewsarchiveproject.com. Access, he says, will be free.

“It doesn’t belong to me, unlike my photography, is the way I feel about it,” Kunsman says.

After four years of proverbially climbing Everest, he is finally approaching the summit. Worn out by the divisiveness, and how “everybody is just standing their ground as to what’s right or wrong,” Kunsman says “Fake News” will not go on past Nov. 3, the presidential election.

“I can’t, that’s why this project’s done, no matter what happens with the election,” he says. “I’m done.”