Trump, Mueller, and the response to the report 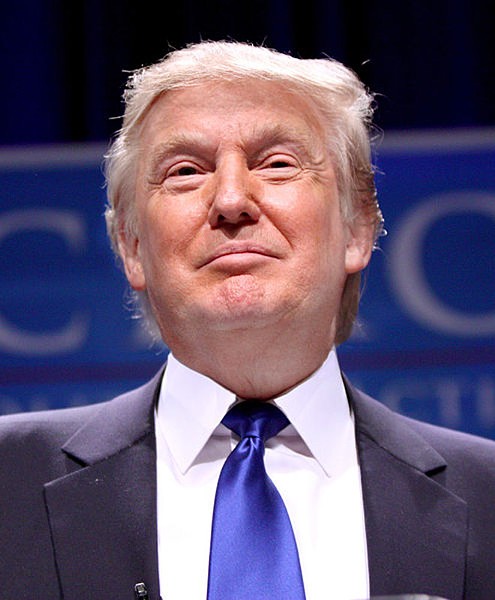 PHOTO BY GAGE SKIDMORE Donald Trump
There were no surprises in the Mueller report, not to anybody who paid even cursory attention to the news over the past couple of years. But the report confirmed and fleshed out a lot that we heard only in bits and pieces. And whatever happens as a result, by confirming the depth of the president’s threat to his country, Mueller and his investigative team have produced a vitally important document.

Thanks to their work, we know that, in the report’s words, Trump “sought to have Attorney General Jefferson (Jeff) Sessions unrecuse from the Russia investigation and to have the Special Counsel removed, and engaged in efforts to curtail the Special Counsel’s investigation and prevent the disclosure of evidence to it, including through public and private contacts with witnesses.”

We know that Russia was an active player in the 2016 presidential election, trying to sway voters, sow discord among Americans, lessen Clinton’s chances, and establish connections with Trump.

We know that during the campaign, members of Trump’s real-estate operation talked with Russian government officials about a Trump Tower project in Moscow.

We know that investigators weren’t able to get some of the evidence they sought because emails were encrypted or destroyed. Because of those “identified gaps,” the report says, the investigators “cannot rule out the possibility that the unavailable information would shed additional light (or cast in a new light) the events described in the report.”

We know that in his answers to investigators’ questions, the president repeatedly said he couldn’t remember, didn’t remember being told, had “no recollection.”

We know that Trump lied repeatedly, and that he instructed members of his administration to lie. And we know that things could have been a lot worse if some people in the White House hadn’t refused to do what Trump told them to do.

“There it is in black and white,” writes Susan Glasser in the New Yorker: “a thorough and careful legal document showing high-ranking officials of the US government refusing to obey orders from the President because they believed them to be improper or outright illegal.”

And we know that in spite of everything the investigators found, Mueller didn’t think the evidence was solid enough to determine that Trump coordinated efforts with the Russians to influence the campaign. And Mueller and his team said they were unable to judge whether Trump had obstructed justice.

But, the report adds: “if we had confidence after a thorough investigation of the facts that the President clearly did not commit obstruction of justice, we would so state. Based on the facts and the applicable legal standards, we are unable to reach that judgment. Accordingly, while this report does not conclude that the president committed a crime, it also does not exonerate him.”

In the end, Mueller seems to say that he and his investigators feel they’ve done all they can do. They’ve provided evidence for future action by other people.

“With respect to whether the President can be found to have obstructed justice by exercising his powers under Article II of the Constitution,” says the report, “we concluded that Congress has the authority to prohibit a President’s corrupt use of his authority in order to protect the integrity of the administration of justice.”

That conclusion, says the report, “accords with our constitutional system of checks and balances and the principle that no person is above the law.”

Mueller’s report answers some questions, then, but it raises others, writes a team of analysts on the blog Lawfare. “Most importantly,” the analysts write, “it poses the question of whether this conduct is acceptable—not whether it’s lawful or prosecutable or whether the evidence is admissible, but whether as a nation we choose to accept it, and if not, what means we exercise to reject it. Mueller is not a political figure, but the record he has created puts these fundamentally political questions squarely before us.”

And so in light of all this, what should Congress do? What should the rest of us urge our own representatives in Congress to do?

There are lots of calls for impeachment, and not just from liberal Democratic politicians. One of them came from conservative political writer Andrew Sullivan in New York Magazine.

“Trump now has a Justice Department run by a loyalist who believes in total executive supremacy,” Sullivan wrote following the release of the Mueller report, “and who has just revealed himself as a man willing to lie and deceive and distort to please his master. Every official who might have restrained this president is gone. There are almost no heads of agencies, and no dissent in the Cabinet. The country is effectively being ruled by a monarch and his court. Foreign policy has been given to family members. The Fed is being rigged to remove professionals and install loyal toadies. The judiciary is being filled with judges who defer to presidential power in every circumstance.”

“To refuse to use the one weapon the Founders gave us to remove such a character from office is more than cowardice,” Sullivan said. “It is complicity. It is a surrender to forces which aim to make the world safe for authoritarianism.”

New York Magazine’s Eric Levitz also called for impeachment. “The branch of government responsible for enforcing the rule of law is led by a man with contempt for that very concept,” Levitz wrote. “Congress’s constitutional obligation in this circumstance is unambiguous. The president swore to ‘faithfully execute’ the duties of his office. He has not. Thus, Congress should evict him from that office.”

The Washington Post’s Jennifer Rubin quoted former federal prosecutor Renato Mariotti: Even though the Republican-led Senate won't convict Trump, Mariotti said, “the House has a constitutional duty to uphold the rule of law.”

“(T)he American people deserve to know where each member of Congress and senator stands, and for the constitutional process to play out,” Mariotti said.

Many things are the duty of Congress, though. And overall, members of Congress should do what they believe is best for the country.

Is impeachment best for the country? To me, at this point, it doesn’t seem to be. Impeachment hearings aren’t likely to tell the public anything it won’t learn from investigations already under way. Impeachment by House Democrats isn’t likely to accomplish anything other than infuriating and energizing Trump’s base. And unfortunately, it will probably frustrate people in the middle who think it’s time to move on.

The Mueller report has given us plenty of information. It shows us a president dangerously unfit for office, in experience, judgment, and temperament. Evidence of that was obvious before the election, but enough voters ignored it to put him in the White House.

The question now is the question the analysts on Lawfare asked: Do we find Donald Trump’s behavior in office – his lying, his threatening, his attempt to control the Justice Department, his willingness to accept Russian interference in a United States’ election, his use of his office to increase his personal wealth – acceptable? Or do we believe in the principles the country was founded on and in the rule of law?

Donald Trump is the duly elected president of the country. Voters gave him his office. To me, at this moment, what’s best for the country is for American voters to remove him, if we’re up to that task.