Trump gets the Ax treatment in Rochester street art 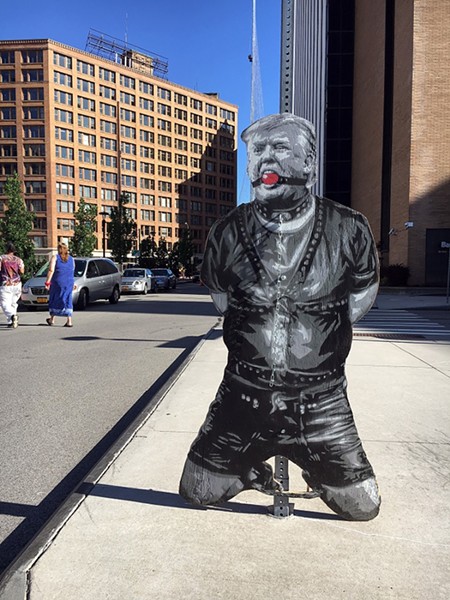 PHOTO COURTESY AX A stencil and spray paint image of Trump in bondage showed up at various locations around downtown Rochester over the weekend.

If you were out and about last weekend, you might have noticed Donald Trump on his knees, wearing bondage gear and a ball-gag, leaning against various city street signs. The risqué image is a project by Rochester-based street artist Ax, who is known for adorning walls with stenciled political and social commentary.

The project included four stenciled duplicates of the image, spray-painted on plywood, and bolted to street signs in different locations downtown.

Ax also posted a picture of the work, which he is calling "Control," on his Instagram account, inviting people to find the Trumps and interact with them: "4 of these are bolted up in the city, 10 pins attached to the backs of each one. Grab a pin and take a photo of yourself showing the president who is really in control."

As much as the Trump camp would love to silence criticism in art by defunding and condemning it, they can hardly prevent all of it. And street art and graffiti remain, arguably, the most immediate and democratic means of communicating a political or social message.

"When I dreamed the piece up, I wanted to create a physical representation of giving the power to the people ... and I also just wanted to shut up his mouth," Ax says. "The Trump news of the day when I first started working on it was all about him leaking secret information to the Russians in the Oval Office. It just made me want to pull in the reins."

Ax's original post has received hundreds of likes and mostly positive comments, and Ax says that a few people have sent him pictures of themselves with the pieces. "Someone told me that they biked downtown to look for them," he says. "Another person said that their 'Facebook feed was freaking out over this,' and I actually saw a Facebook friend, someone that doesn't know about my alter ego, take a pic of the Goodman one."

There's also been a reaction on Reddit, including the suggestion that Putin should be next to Trump with a paddle.

Still, street art is by nature both ephemeral and open to its audience's reproach. "All of them were broken within three hours," Ax says with a laugh.

It's unknown if the vandals were angry at the depiction of the president or just wanted to kick him.

Ax posted a follow-up image of one of the busted Trumps, now decapitated, which received more likes and laughs.

"Yo, where's his head?" someone wondered.

"Kathy Griffin has it," came the rejoinder.