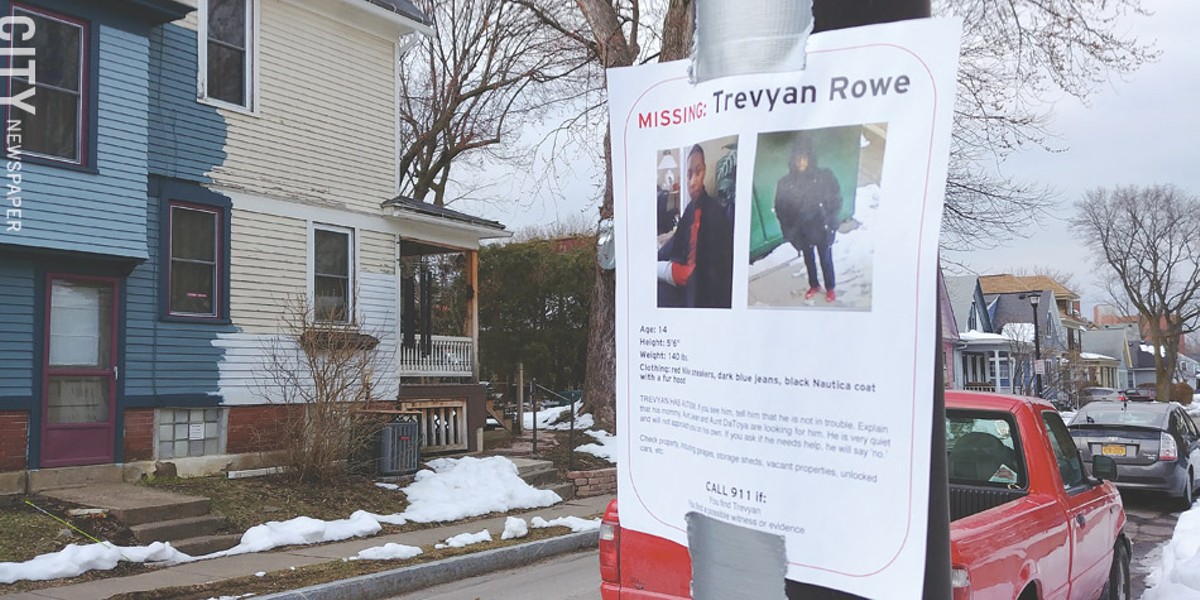 PHOTO BY JEREMY MOULE Flyer shows Trevyan Rowe as a missing person.
The Rochester School District is no stranger to criticism, and many times that criticism is completely unfair. But dear lord: the failures that led up to Trevyan Rowe's death on March 8 are way, way beyond my comprehension.

In any article about the multiple problems in this school district, context is important. It's no coincidence that the district's poverty rate and its academic achievement rate are among the worst in the state. Concentrated poverty has an impact, and Rochester excels in concentrated poverty. That is crippling thousands of students and families, and it's creating problems for teachers and schools that districts in more affluent communities don't face.

But poverty didn't cause Trevyan's death. Inaction by multiple adults did. On Monday, New York State Attorney General Eric Schneiderman and State Education Commissioner MaryEllen Elia announced that they have launched a civil investigation into "the facts and circumstances" surrounding Trevyan's death. They will also review "the school district's policies, procedures, and protocols to determine what improvements need to be made."

That's the only positive bit of news that has come out of this tragedy so far. Trevyan's death has laid bare – once again – the Rochester school district's failure in key management responsibilities: oversight and accountability.

Over years – through successive superintendents and school board members – multiple reports and audits have criticized the district's management, in areas ranging from finances and attendance records to special education. The reports have documented the causes of the problems, and they have recommended corrections. And problems persist.

Maybe, just maybe, Schneiderman and Elias's investigation will begin to show why this district can't get its pardon-my-French shit together.

The immediate problems that culminated in Trevyan's death began when he got off the school bus the morning of March 8. Rather than heading inside School 12 with other students, he walked up South Avenue toward downtown.

He didn't enter the school. Didn't go to any classes. But three teachers marked him present.

Media reports have focused heavily on the fact that Trevyan was a special-education student. He was, and it's important to note that this may be yet another example of deep, years-old problems in the district's special-ed program. But this could have happened to any child, in any classroom, in any school.

Except – it is impossible to avoid asking this question: If Trevyan had been white, would his absence have been treated more seriously?

Some media are reporting now that Trevyan was a deeply troubled child who had walked away from school before – and who had threatened suicide before. Channel 10 interviewed a woman who said she was a teacher at School 12 and that she herself knew of Trevyan's previous suicide threats.

Channel 10 protected the woman's identity, and it isn't clear whether other adults in that building knew about Trevyan's history. But we do know this: some of them either didn't notice that he wasn't in class that day, or they didn't see the importance of filling out the day's attendance report correctly.

I don't mean that the adults didn't care about Trevyan. There may be some rare teacher who doesn't care about students, but I believe most of them do. Teaching is a service profession. Not many teachers get rich. In addition, the job is hard, tiring, and emotionally draining, and teachers are often subject to abuse from parents and the community that would drive most of us out of the profession quickly.

I would bet that Trevyan's teachers are in a world of pain right now, grieving for him and berating themselves. And it is clear that school district officials – who held a press conference last week to agree that the district had failed Trevyan – are saddened beyond words.

The problem isn't a lack of caring about children. Nor is it "human error." Most likely, the problem is plain old complacency. Filling out absence reports is paperwork. Every day teachers look at the class, open the absence report in their computer, and indicate whether each child is present or absent. Paperwork. Who cares? Well, now a lot of people do.

Which brings us to accountability.

The district has been told repeatedly about problems with its attendance system. Each time, officials have said they've put corrective measures into effect. A 2008 audit found that the district wasn't able to monitor class sizes. A 2009 audit found that the teachers were given no deadline for filling out attendance records. They could fill out an entire year's worth at one time.

A few years ago, the district's computerized attendance system had an automatic default setting: every child was automatically marked "present," and teachers had to change that to "absent" for children who weren't there. Now, there is no default setting. Teachers have to enter the status for each child.

For a number of years, the district has conducted "attendance blitzes," sending staff and volunteers out to visit the homes of chronically absent children. That's an indication of how seriously the district considers children's attendance in school.

And yet three teachers that day indicated that Trevyan was present. We don't know yet why. What we do know is that the district knew there had been a problem in the past with teachers keeping accurate records. Merely changing a computer program and relying on teachers to use it correctly isn't good enough. District administrators should have trained teachers on the importance of doing it correctly – and should have made sure that they did it. Absence reports aren't just paperwork.

The most recent report, produced in April 2017, said the district doesn't provide consistent special-education services, and frequent reorganization has created confusion and undermined accountability. The office's accountability system "is insufficient at best," the report said, "and not present at the school level."

Previous investigations into the district's management have found things like this: accounts payable weren't reviewed, some checks were being written before the payment was authorized, the district didn't adequately track employee absences or benefits, it wasn't properly accounting for city children who attend charter schools and so it was paying for some children who weren't city residents, Medicaid reports weren't correct, the district didn't monitor fuel usage for its vehicles, and it didn't monitor transportation contractors' bills.

Have those problems been corrected? Who knows? There's not much reason to trust that they have.

Sadly, Trevyan's death makes it hard to continue to point to the terrible effect that concentrated poverty is having on students. This community absolutely has to recognize the damage that concentrated poverty is doing, and it has to do something about it. Now, it'll be easy to avoid that tough discussion and just yell at the teachers. And that will get us nowhere, other than making it harder for teachers to do their job.

The tragedy has also severely damaged the district's already tarnished reputation, perhaps irreparably – this at a time when the district is scrambling for funds and losing students to charter schools.

There's plenty of blame to pass around here, and of course it's being passed. On Sunday, the Democrat and Chronicle called for the resignations of Superintendent Barbara Deane-Williams, school board president Van White, and teacher's union president Adam Urbanski.

That might be good symbolism, but it won't fix the district. Urbanski isn't responsible for holding the members of his union accountable for doing their job properly. The district administration is. And White isn't the only board member and Deane-Williams isn't the only superintendent who hasn't been able fix the district's problems.

It's important to emphasize the mental-health aspect of Trevyan's tragedy. If the reports are accurate, that child needed help that he didn't get. And that is most certainly not the school district's job – and shouldn't be. The community needs to recognize that problem and find a way to deal with it.

That doesn't relieve the district from the responsibility of getting its act together, though. Maybe Schneiderman and Elias will be able to identify not only what happened that led to Trevyan's death, but why. If so, the next step will be deciding what to do about it.

The only alternative I see is to put the entire district in receivership, under the control of the State Education Department.