Treatment for a traumatized world 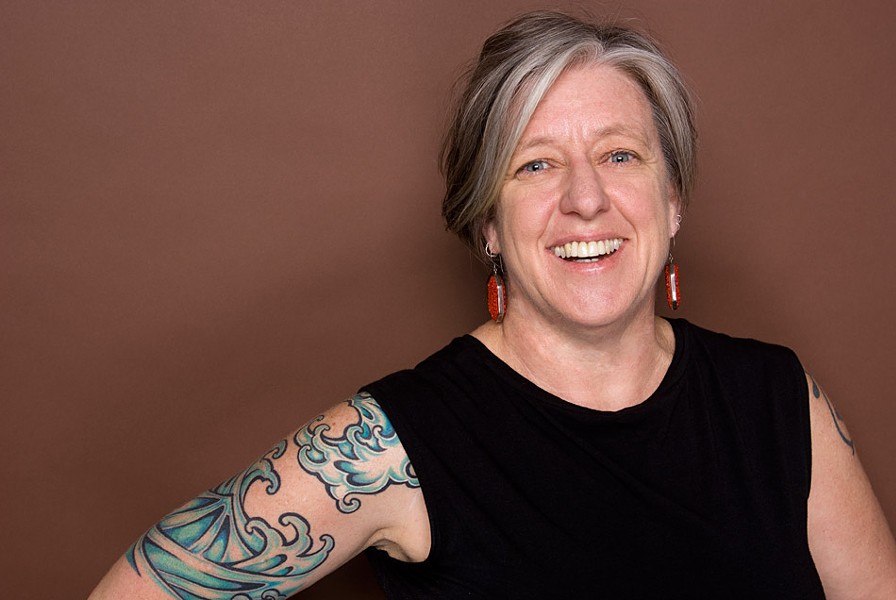 PROVIDED PHOTO Clinician and instructor Vikki Reynolds will be in Rochester on April 4.

One of Vikki Reynolds' first clients was a young girl who'd pee the bed to avoid being raped. Another early client fled halfway around the world to escape torture for his political beliefs.

Reynolds, a clinician and instructor, says she observed similar characteristics in these early clients. Alongside pain and sadness, she says, there was an incredible well of resistance. And seeing this inner strength radically changed how Reynolds says she approached her counseling work.

"I had traditional trauma training that led us to what they call 'go into the wound' and find out more about the trauma," she says. "You were supposed to get all of the details. I just knew that this guy who somehow got to Nigeria and then to Vancouver and then to me for counseling was amazing. Most people die when they're tortured. But what I wanted to know was how he lived."

Reynolds, who earned her doctorate from the University of British Columbia, is part of an emerging group of clinicians who view people who have experienced severe trauma, such as rape, incest, war, torture, disaster, and incarceration through a different lens.

Reynolds says she sees them less as victims and more as resisters and survivors. What they've done, she says, is beat incredible odds, and part of treating them is helping them make that connection.

Nearly a dozen area colleges and social service agencies including the University of Rochester, Nazareth College, and SUNY Brockport are co-sponsoring Reynolds' visit to Rochester on Friday, April 4.

Reynolds will lead a workshop on treating trauma at SUNY Brockport's downtown location. The workshop is being offered to undergraduate and graduate students in the social services field, but it's also open to the public. To register for the event, which will be held at 161 Chestnut Street from 9 a.m. to 4 p.m., call 325-5260.

Trauma is generally viewed as an incident or series of events so threatening that it leaves people with physical or emotional scars or both. Symptoms of trauma range from depression and extreme anxiety to eating disorders and substance abuse.

Severe trauma in children can cause impairment of the neuroendocrine systems and changes in both the central nervous system and brain development, according to a 2005 study commissioned by the State of Vermont's Department of Health. These children frequently lag behind in school, the study says, and have diminished cognitive abilities.

"Trauma is typically understood in a medical way," Reynolds says. "In a medical model, an event occurs and it's of such magnitude that you think that your life is at risk, and alongside that risk is the experience of being totally helpless. The problem with the medical model is that it locates the problem [trauma] entirely in the brain of the person who is the victim, as if it has nothing do with the outside world."

Reynolds says this tends to make people feel as though they are responsible for the incident and their suffering.

"You can really get into the blaming language very easily," she says. "'If they had been tougher, they wouldn't have been victimized.'"

Reynolds is a longtime social activist and has spent much of her career working with refugees and survivors of torture, rape, and violence. She has also worked with men and transpeople who have been incarcerated.

Social activism has helped shape her practice in several ways, she says, and she encourages the professionals she meets to add a social justice perspective to their tool box. One of activism's principles is, wherever there's external pressure, there's resistance in some form or another to that pressure.

"I'm always asking, 'Are you depressed or oppressed?' she says. "Because oppression and abuses of power are at the root of why interpersonal violence occurs."

She says no one is a passive victim of a traumatic event; we always summon up some type of resistance. It's human nature to try to guard our dignity, Reynolds says.

"Every person who has ever been raped whom I've worked with, whether it's a woman, a man, or a transperson has fought back," she says. "They've resisted that rape with everything they've got. Often they don't even know it. For example, when a man is raping a woman and he holds a knife to her throat and tells her to shut up or he'll kill her, her resistance is silence. That is fighting back. She's doing what she thinks it will take to stay alive."

"Let's say somebody attacks a person and I ask that person 'What did you do about it?'" Boucher says. "That can be very demeaning."

Reynolds says a lot of her work is about expanding the profession's understanding of the interconnectedness of trauma to a culture of violence, poverty, and oppression.

"They're what we call social determinants of health," Boucher says.

But when Reynolds adds the social activist and social justice components, Boucher says, she's going a step further and advocating changing the things that help create a traumatized culture.

For example, he says, counselors know that a lot of the issues adversely impacting their clients are interrelated social problems: domestic violence, unemployment, unaffordable housing, and inadequate health care. The violence many clients experience is often a symptom of those other problems, Boucher says.

The social justice model changes the dynamics between counselor and client in a couple of ways, Reynolds says. The victim is empowered, she says, and the counselor or therapist is no longer an objective bystander.

Traditionally, social workers and human service professionals are trained to be objective listeners — another vestige of the medical model, Reynolds says. She says she prefers witnessing instead — a reference to social activism. Among human rights activists, witnessing is the difference between passivity and engagement.

Reynolds says taking a stand against rape, for example, helps people make sense out of a horrific event.

"Amnesty International has witnesses to human rights violations around the world, and one of the things that happens when someone witnesses is that they can't be neutral," Reynolds says. "I'm not neutral about racism; I'm against it. I'm not neutral about the rape of children; I'm against it. I can't be objective about that, and that doesn't make me a bad professional. I think we have an ethical obligation not to be objective."

There's nothing natural about a socially unjust society, she says; slavery, colonization, and genocide are unnatural. And when social service professionals look at their work from an activism perspective, Reynolds says, they're taking a stand.

"They're saying a socially just world is a mentally well world," she says. "That's what we should be working toward."