It's almost hard to believe that four years have flown by since Catelyn Augustine and Amber Odhner unleashed Eat Me Ice Cream on our city, jolting Rochester's complacent taste buds awake with flavors like Lilac, Sweet Corn, and Orange-Curry, as well as more elaborate mashups like Spring Garden — an asparagus, chive, and rhubarb ice cream between black-pepper shortbread cookies — and Taco!, starring scoops of spicy tomato, avocado, and pinto-bean ice creams on sweet Frito waffle cookies.

By now you'd think that local ice cream lovers, be they dairy-friendly or vegan, would have utter trust in their palates. But do Augustine and Odhner continue to get any pushback from those who might be reluctant to try creations like their current favorites, Lavender Goat Cheese or a bright, refreshing Pine?

"We sometimes have to convince people; if they don't like it, they'll get their five bucks back," Odhner says. "But it's sugar and fat. You're gonna like it."

Eat Me Ice Cream had a watershed year in 2014. Perhaps most notably, Augustine and Odhner dropped roots last June at a colorful, functional space in the Hungerford Building on East Main Street that's alternately a production kitchen, a de facto classroom, and a First Friday gathering spot. "It was a miracle that we found it," Augustine says. "It was ready, it was here, and it was a smooth transition. You know you're on the right track when everything just falls into place."

"Last year we did everything under the sun just to reach this point," Odhner adds, citing appearances at multiple farmers' markets as well as a cool-weather schedule of special events and supplying wholesale accounts like Abundance Co-op and Hart's Local Grocers, plus restaurants like Cure and the newly opened Vive Bistro & Bakery. They also outsourced the demanding cookie part of the ice-cream sandwich equation to baker Giannina Naylon. "She's this amazing Italian lady; she only bakes for us. Her cookies are phenomenal," Odhner says.

As the current ice-cream season gets underway, Augustine and Odhner still aren't interested in the status quo. Despite maintaining day jobs — Augustine is a massage therapist and Odhner is on the staff at Lento Restaurant — they're eyeing new equipment, developing imaginative offerings like ice cream candy bars, and designing packaging and T-shirts. Eat Me will even have its own dedicated flock of chickens through Spencerport's Growing Family Farms, with the egg yolks meant for ice-cream bases (not the vegan ones, of course) and the whites returned to the farm for the pigs' nutritional needs.

A visit to the Eat Me website (found at eatmeicecream.com, it showcases stunning design by Derek Crowe) provides a rundown of flavor possibilities along with instructions on how to book Eat Me for an event or score some custom work. You'll also find details on Eat Me's brand-new ice cream club, complete with a membership card that will entitle the bearer to exclusive flavors and cool extras. "It'll be our best work yet," Augustine says.

Odhner agrees: "It's gonna be fun for us. Rather than doing things we think we should do to sell our product, we're doing what we want to do. Because when we do things we don't really want to do, there's no love in it."

And while Eat Me will be scaling back on the farmers' markets this year — Augustine and Odhner are only planning to participate in the Brighton Farmers' Market on Sundays — there will still be food truck rodeos, private parties, corporate events, and even more wholesale accounts. But the main goal is to get the Eat Me custom-built trikes on the road more and take their frozen treats directly to the masses. "People keep things a secret. Let's celebrate it," Augustine says. "There's something special here and we can't let that go." 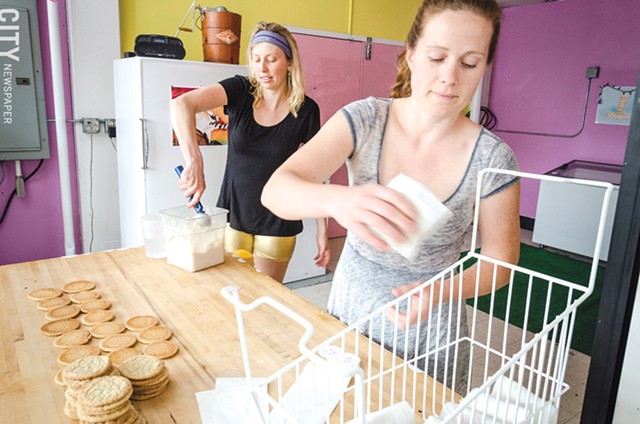 "You make what you want to see," Odhner says. "We could have done this in a big city, but we're here, in Rochester, fighting for what we're doing. At this point we love that we're small, and rather than parking somewhere, we wanna just cruise the city."

"I'm not going to stop doing that until the policeman stops me. And so far they've only wanted to buy ice cream," Augustine says with a laugh.

Self-described "art-room kids" who met at Churchville-Chili High School, Augustine and Odhner have battled misconceptions (yes, they really do make their own ice cream; no, "Eat Me" is not meant to be rude) while keeping an eye firmly on the future. "We see ourselves as more of entrepreneurs and this is our first project," Odhner says. "We are a woman-owned business. We're women, and we're gonna kill it. We're working for ourselves, and that's important to us. I'd just love to see women rising to the top in this city, and running shit, and networking and helping each other more."

As millennials, Odhner says she and Augustine see themselves as "this cross of awesome ideals for what the world should be, like how we source our ingredients and make our stuff, how we choose our products. We are wholesome, but we're also fun and fresh."

Naturally, as the demand grows, Augustine and Odhner kick around the idea of bringing the Eat Me trikes to other cities, but it's always been about more than just ice cream crafted with organic and locally sourced ingredients. "I like to remember this," Augustine says, "especially when times get tough: This is the flower of our friendship; one of the many flowers. It's really neat to see that."

A pairing for late spring

Odhner and Augustine suggest one scoop of Eat Me Lilac Ice Cream and one scoop of Cloud Ice Cream (recipe follows) served with Grapefruit Spritzer — made from one part fresh grapefruit juice to two parts seltzer and two dashes of Fee Brothers grapefruit bitters, chilled or over ice.

Combine 1/2 cup of heavy cream, milk, and sugar in a heavy-bottomed saucepan. Slowly heat the mixture until it's warm and the sugar has completely dissolved. Remove from heat, cover and refrigerate until thoroughly chilled, four hours or overnight.

Just before churning, in a stand mixture with the whisk attachment (or in a bowl by hand), whisk together the egg whites and salt on high speed until they form soft peaks. In another chilled bowl, whip the remaining 1/2 cup of heavy cream until it holds soft peaks. Carefully fold the chilled milk mixture, whipped cream, and whipped egg whites together until no large clumps remain. Add the rum and freeze in an ice cream machine according to the manufacturer's instructions.