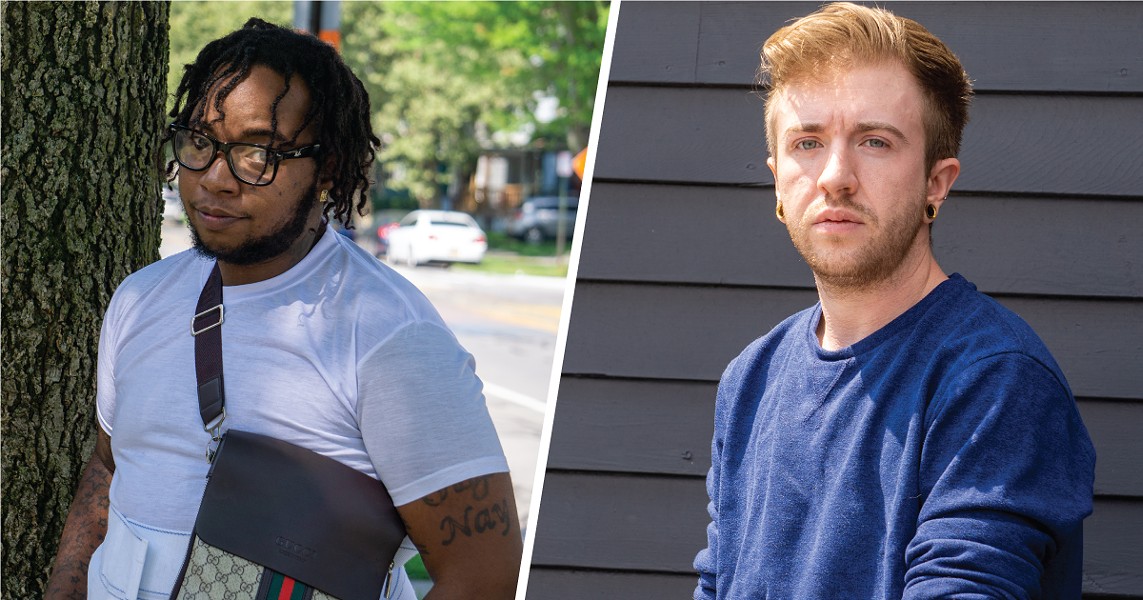 PHOTO BY GINO FANELLI Trey Lowery (left) and Cori Smith said Highland Hospital treated them with disrespect and indifference due to their status as transgender men.
Trey Lowery had already undergone all the blood tests and pre-operation screenings he needed when he was admitted to Highland Hospital in July for his scheduled bariatric surgery.

But as he prepared to go under the knife, he said, a nurse notified him that one more test was needed. He recalled her handing him a plastic cup for a urine sample — to check if he was pregnant.

Lowery, 33, is a transgender man who began his transition four years ago. His driver’s license and his birth certificate list him as male. His medical records at Highland, which Lowery provided, listed him as a transgender man. Yet throughout his stay, Lowery and his family members said, hospital staff repeatedly referred to him as “her.”

“They took my pride away,” Lowery said. “I felt like I didn’t want to be here anymore, I wanted to kill myself, because I worked so hard to be here like this, and I’m not getting appreciated for who I am.”

His experience at Highland, whose specifics were confirmed by his wife and mother and, in part, by the hospital, illustrates how hospitals across the country struggle to provide care to transgender and gender nonconforming patients with sensitivity, despite efforts at improving.

In a prepared statement, Highland defended the care Lowery received as “medically appropriate and compassionate,” but acknowledged that there was room for reflection.

An estimated 1.4 million people living in the United States identify as transgender.

Yet a comprehensive survey of medical schools in the United States and Canada conducted a decade ago, a time when many of today’s emergency’s physicians would have been in training, revealed that less than five hours were devoted to LGBTQ health. Some medical schools reported offering zero hours of training.
The Association of American Medical Colleges only released its first medical education guidelines for LGBT health seven years ago.

Experts on care for transgender and gender nonconforming patients said new legal protections and a heightened awareness of transgender issues have resulted in better and more compassionate care, but anecdotes about missteps and mistreatment by hospital staff abound.

A Twitter hashtag #transhealthfail started trending in 2015, when an outpouring of transgender patients shared stories about their negative experiences with the health care system. The hashtag is still in use today.

Patrick Pitoni, who leads Trillium Health’s Transgender Center of Excellence, which provides care tailored to transgender patients and guidance to health care providers based on World Professional Association for Transgender Health protocols, said complaints are many.

“We mainly hear about people being misgendered or the wrong pronouns used,” Pitoni said. “Not at Trillium, but it happens a lot everywhere around the country.”

Lowery’s complaints about Highland in many ways mirrored those made seven years earlier by another transgender man, who eventually sued the hospital and filed a police report against the emergency room physician who treated him, accusing him of sexual assault and a hate crime.

Cori Smith, 30, was admitted to Highland in November 2014 for treatment of what was determined to be twisted ovaries. Four days earlier, he had undergone an egg retrieval procedure, and went to the hospital in extreme pain.

He recalled the staff giving him a medical wristband identifying him as a woman.

“I was like, ‘You’re not giving me a female wristband,’” Smith said. “They literally rolled their eyes, laughed it off, and said, ‘We’re not doing that.’”

The doctor treating him refused, according to his lawsuit, a move that Smith contended was fueled by the doctor’s “outwardly transphobic” demeanor and unwillingness to aid in his transition. Later, according to the lawsuit, the doctor ordered an unnecessary transvaginal ultrasound that he performed in front of a group of medical students.

“There was no medical reason for them to do it because I had already received an ultrasound downstairs,” Smith said. “I was kicking and screaming.”

The charges Smith would later level against the doctor were serious enough for the Monroe County District Attorney’s Office to empanel a grand jury to examine. But the grand jury never handed up an indictment.

Smith filed suit against Highland in federal court three years after his experience, claiming discrimination and seeking $750,000 in damages. The judge dismissed the case on the grounds that the statute of limitations had expired and that the allegations did not meet the threshold for discrimination. Smith has since filed two appeals. Both were dismissed.

In May, the administration of President Joe Biden announced that health care providers cannot discriminate against transgender people, a move that reversed a Health and Human Services Department policy under President Donald Trump that said anti-discrimination regulations under the Affordable Care Act did not apply to transgender people.

Biden administration officials said the new policy was required by a 2020 Supreme Court ruling that LGBTQ workers were protected from employment discrimination.

The doctor who treated Smith at Highland, whose name CITY is withholding because he was never formally charged or found to have acted inappropriately by a court of law, now practices in Ohio.

In an email, the doctor declined to comment further, and deferred to the statement from Highland.

Nearly four years after his stay at Highland, in August 2018, officials overseeing quality control and patient experience for the University of Rochester Medical Center, which runs Highland, publicly apologized to Smith and vowed to do better for transgender patients.

“Mr. Smith taught us so much,” the letter read in part. “In doing so, he has been a catalyst for UR Medicine, helping to accelerate and expand the work underway to improve healthcare delivery for our transgender community.”

The letter touted strides the hospital system had made to improve, including doing away with gender identifiers from patient wristbands and a willingness to change a person’s name and gender in its records to reflect a person’s legal status, as well as list preferred names, gender identity, and pronouns prominently in the medical charts of people who are in the process of transitioning. It also cited a gender health services clinic at Golisano Children’s Hospital.

Highland, though, doesn’t acknowledge that its medical care for Smith was anything other than appropriate.

“UR Medicine believes that Mr. Smith received appropriate medical treatment at Highland Hospital in response to his need for emergency care in November 2014,” read a statement from the hospital to CITY. “This is based on a thorough review of the medical record by clinical professionals on Highland’s patient safety team, a review which included interviews with Mr. Smith’s attending physicians and other caregivers.”

Despite the changes that URMC officials insisted were implemented in response to Smith’s experience, Lowery claims to have received similar treatment. He recalled feeling degraded during his time in the hospital’s general surgery inpatient unit on the sixth floor.

“When I go to my primary doctor they don’t even give me a pregnancy test, so why would you degrade me and do that and feel like it’s okay?” Lowery said. “And then I get upstairs and it’s constantly ‘she, she, she, she’ throughout the whole stay of me being there.”

Lowery’s wife, Quenisha Lowery, and his mother, Cheryln Smith, echoed his complaints. Quenisha said nurses continued to refer to her husband as a woman even after being corrected.

“They never once referred to him as a male, never, not once,” Quenisha Lowery said. “Even when I corrected them, they still referred to him as the same thing.”
Cheryln Smith recalled that when she heard nurses refer to her son as a woman, she started reliving the trauma she had endured years earlier in coming to grips with Lowery’s transition. 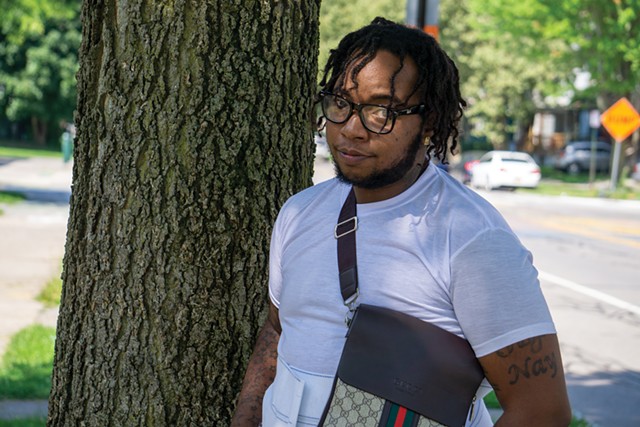 Lowery, who said he plans to file a lawsuit, said he told staff clearly he was male and asked to be addressed as such, but that his requests went unmet.

He recalled receiving a call on July 20, a day after he was released from the hospital, from Highland’s chief executive officer, Dr. Steven Goldstein, in which Lowery said Goldstein apologized for Lowery’s experience and offered him a job as a “spokesperson” for transgender people at Highland.

Lowery’s wife and mother vouched for the call, and Lowery said he declined the offer.

In its statement defending its care of Lowery, however, the hospital denied that such a phone call occurred.

“We take patient concerns very seriously and when issues are brought to our attention, we conduct a thorough review to determine whether staff members took all appropriate steps to care for the patient,” the statement read. “Upon completion of our review of this patient’s case, we believe that his care was medically appropriate and compassionate. However, we will continue to reflect on this individual’s experience to see if there is anything we can do better.”

As for the pregnancy test, the hospital said patients give blanket consent for necessary medical tests, and that a pregnancy test would be recommended for any person with ovaries, regardless of gender identity, if they were undergoing anesthesia.

“Patients provide overall consent for treatment and care via signature when they arrive at the hospital,” the statement read. “As a standard safety procedure, any individual scheduled for surgery at Highland undergoes numerous tests as part of preanesthesia evaluation to reduce risk. Clinical staff do not necessarily seek permission for each individual test that is run.”

Pitoni, of the Transgender Center of Excellence at Trillium, said he believed the vast majority of local health care systems were striving to better serve transgender patients, adding that many transgender people from outside the area come to Rochester for care because of the high standards for service.

He pointed to Strong Memorial Hospital, which like Highland is under the URMC umbrella, in particular as a hospital providing good care for transgender patients.

“I hear from a lot of patients that, at Strong, the doctor might say, ‘Oh, you’re transgender?’ and they say, ‘Okay,’ and went on with the rest of the questions,” Pitoni said. “There are facilities around that are really, really up to speed. As much as I think we can all be there, we’re not.”

The World Professional Association for Transgender Health keeps a list of medical professionals whom the association has certified as being trained in transgender care. The list includes 11 medical practitioners in Rochester. Several of them are with URMC, but none are at Highland, according to the roster.

A Highland spokesperson said the hospital has some staff in training to receive WPATH certification.

Both Lowery and Smith believe their stories could have been avoided had doctors and nurses heard their voices.