Town's rained out and tapped out 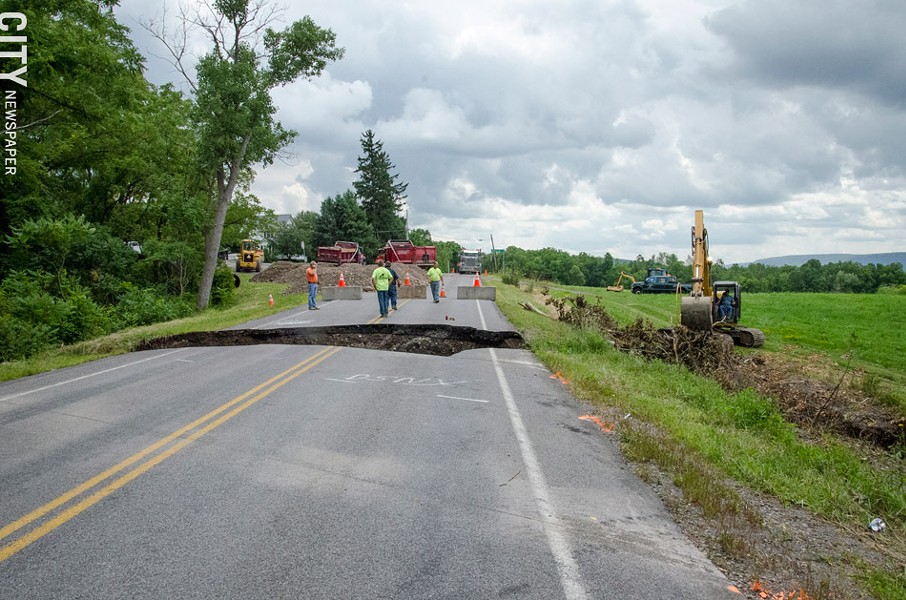 FILE PHOTO Last year, several roads in Richmond were washed out after a July storm dumped 6 inches of rain on the town in three hours. Some of the same areas were damaged again during flooding this past June.

On June 15, 3.3 inches of rain fell within 40 minutes in the Ontario County town of Richmond. The "gully washer," as Supervisor Ralph Angelo calls it, busted out 22 culverts along town roads, with East Lake Road taking the worst hit.

If that sounds familiar, there's good reason. On one July day last year, downpours dumped 6 inches of rain on Richmond in three hours, and a section of East Lake Road was entirely washed out. The town subsequently spent $400,000 to repair the damages; the bill equaled the entire town highway budget.

"What we put back, it washed it all out," Angelo says of this year's flood.

Richmond and the neighboring town of Canadice, which suffered flood damages from the same June 2015 storm, will receive some state funding to aid in their recovery efforts. State Senator Rich Funke announced last week that Richmond will get $300,000 and Canadice will get $100,000.

But the flood damage, and the cost of related repairs, show the importance of planning for and adapting to climate change. The federal government's National Climate Assessment says that across the Northeast, heavy downpours are happening more often, and they're becoming more intense. Between 1958 and 2012, the amount of precipitation attributed to the heaviest 1 percent of storms grew by 71 percent.

That trend is expected to continue, especially if man-made carbon emissions aren't substantially decreased, and soon.

Richmond officials want to avoid replacing the same culverts every year, so they're looking ahead. As the town repairs the washed-out conduits – 10 of the 22 culverts washed out in June have already been fixed – it's making them wider, Angelo says. More water will be able to pass through, and the channels will be less likely to clog with debris.