Rochester’s newest and ingenious interactive art installation is tucked away in a nondescript room of an acupuncture and holistic medicine practice in Penfield.

In there sits an icosahedron — or 20-sided geometrical structure — consisting of 30 fluorescent tubes fused together by 3D-printed, five-pronged joint fitters. Imagine an oversized Dungeons and Dragons die that can comfortably house a person, and you’ve got the picture. Each tube contains 150 LEDs, for a total of 4,500 individual lights arranged in strips, coiled around wooden dowels inside the tubes, and diffused with parchment paper. 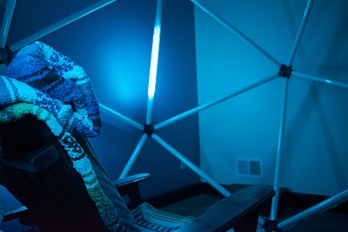 Inside the die is a single chair, with a blanket as a makeshift headrest, and a set of headphones. To get to it, you duck through an opening in one of the die’s triangular faces and settle in.

The room goes dark and silent; then “BLOOM” takes off.

“BLOOM” is the brainchild of musician and engineer Tom Montagliano, whose spatial sound installations have been a fixture at Keybank Rochester Fringe Festival for several years.

The multisensory experience of “BLOOM,” which combines ambient music composition and dynamic light design, is the first of his audiovisual installations created as a private, solitary experience.

“I’m trying to straddle the line of a regular performance and an art installation,” Montagliano says.

“BLOOM” begins with a deep, low hum as light starts to emanate from a single tube and spreads slowly to more and more of the surrounding structure. Synth-laden chords gradually emerge as the light swells brighter and brighter.

With eyes closed, you can still see the flowing fluorescent light projected against the back of your eyelids, as if looking through a negative image filter at ghost-like, white-gray streaks. Upon opening your eyes again, the light takes on a viscous quality as it moves fluidly from tube to tube in various directions.

Later, you can hear the plucking of what sounds like a muted harp or ukulele, as blue light evolves into cool shades of light teal and aquamarine, and the movement of the LEDs within the tubes emulates the way sunlight flickers on the leaves of a tree.
At other times, tiny pebbles of light spackle the space in front of you, accompanied by a crackling sound that evokes images of dry leaves underfoot in the fall, or the sound of ice thawing in spring.

The choreography of “BLOOM” is not only in the movement of light through the tubes, but also in the movement your eyes make in response to the light. Your perception of what you hear and see becomes a vital part of the performance itself.

Sonically, the experience is like hearing a futuristic cousin of the traditional organ. Low-range bellowing notes and high, shimmering tones sound as if they were produced conventionally, with air through metal pipes, then filtered through a digital interface.

You might think an acupuncture and holistic medicine office would be an odd place for such an exhibit, but Dr. Aaron Olden, who runs Mindful Medicine Rochester, said it worked for his practice.

Olden felt Montagliano’s audiovisual creations would be conducive for people who had unsuccessfully tried meditation in the past. And because “BLOOM” is a solitary experience that invites introspection, Olden sees it as a psychological salve for our COVID-addled times.

“It’s hard these days to find something to be happy about or excited about,” he says. “So the timing of this worked out really good because it allows people to feel that again.”

Montagliano has displayed his work at Fringe since 2016.

It began with “Immersive Soundscapes,” in which his ambient compositions were played through eight different speakers placed around the spacious Lyric Theatre. In 2017 and 2018, Montagliano took the “surround sound” experience one step farther, arranging the eight speakers in a circular configuration inside the portable “Immersive Igloo,” an inflatable, luminescent structure 40 feet wide and 20 feet tall. Arguably the work for which Montagliano is best known, the Igloo provided a serene environment in which participants could have what the artist dubbed a “3D Sound Experience.”

At last year’s Fringe Festival, Montagliano created “Ripple” with Rochester Dance Theatre, incorporating light design by Occurrent Arts. The resulting multimedia performance gave new meaning to the three-dimensional aspect of Montagliano’s art, as it engaged audience members with the simultaneous movement of sound, light, and physical performers around the space.

The Rochester native’s work with sound and light has always been a crafty amalgam of ethereal conceptual art and technical precision, and the communal aspect of the audience experience has always been crucial.

But 2020 is different. The Rochester Fringe Festival in September will be completely virtual, and the opportunity to experience art publicly in a group setting is highly impractical, if not impossible.

Montagliano says the goal with “BLOOM” was to construct a neutral environment in which to have a meaningful experience that combined the abstract, open-to-interpretation nature of an art installation with the finite time constraints of a concert experience.

Now a Hemlock resident, Montagliano is also a guitarist who had spent ample time performing in Rochester bands such as the prog-rock group Argus Eye and the mystical folk outfit Bogs Visionary Orchestra, as well as his own singer-songwriter project Maudlin Maladies.

Montagliano got tired of the noise and distractions of the typical concert experience, as well as the paradigm of performance. “It takes time for the artist to convince people to go where you want to take them,” he says of concert audiences.

“I don’t like being on stage,” he says. “I like to hit the spacebar and just leave.”

Montagliano became drawn to spatial sound, which he began to explore with the synth-driven band known as The Quadratic Trio, before eventually focusing on the creation of more slow-moving and percussion-less ambient sounds.

The 39-year-old musician also found audiences that were more open and receptive to his compositions at less conventional venues such as yoga studios, art galleries, festivals, classrooms, and bookstores. In realizing how vital it was to present his music in an ideal environment, he started using lights in his presentations, and in 2016 bought the large, inflatable dome for what would become “Immersive Igloo.”

In 2018, while working on an “Orb” art installation at the cultural happening known as Burning Man, Montagliano met software engineer Tracy Scott, who was working on a nearby project called the “Rainbow Bridge.” The two stayed in touch, and Montagliano enlisted Scott to construct the light design for “BLOOM.”

Scott was eager to collaborate with a composer on a project that combined sounds and visuals. “It was a new style for me where I focused on providing visual components that were designed to be choreographed as Tom needed,” he said in a recent email exchange. “It is an ideal collaboration where we rely on each other's strengths.”

Using the digital lighting workstation LX Studio, Scott and Montagliano created their own software to design the visual patterns displayed in the installation. “I built the 3D representation of the icosahedron, including the topological modeling that enables lights to travel along the surface across joints, etc.," Scott said. "There is also representation of the faces, so that visuals can be written to light up random triangle faces, for example.”

But how did an acupuncturist’s office become the appropriate setting for a seemingly unrelated sound-and-light installation?

Olden had seen a performance of Montagliano’s “Ripple,” and as someone naturally interested in sound and music, he began to think about how Montagliano’s art and his work as a medical professional each assisted people in making the connection between mind and body. The doctor refers to this interrelationship as “bio-psycho-social.”

It wasn’t until he read an NPR article about the efficacy of green light in treating people with chronic pain such as migraines that he sought out Montagliano in earnest in January.

A dialogue about how to develop an audiovisual experience ensued. Montagliano calls Olden a “guiding force” who has provided meaningful feedback and lent trust in the artist.

While Olden has made “BLOOM” available as an experience for his patients, he is quick to clarify that it isn’t intended as a medical treatment. He has found that it may be too stimulating an experience for some patients to have directly after acupuncture treatments, and the installation’s brief strobing light effects are ill-advised for those with a history of epilepsy.

He does, however, see it as a way to feel more connected to one’s self, during a challenging time of disconnect throughout society.

“We’re still trying to figure out the audience for this, and I really think it’s for the community at-large,” Olden says.

Olden has also instituted additional safety protocols to ensure that people who come to experience “BLOOM” are doing so safely. Masks are required inside Mindful Medicine Rochester, and the headphones are sanitized before and after each use. Thin, protective ear muffs are also wrapped around the headphones for each individual participant.

“BLOOM” is an ongoing project, in its first iteration. Montagliano is currently brainstorming modifications to the experience for future versions of the installation.

Private viewings of “BLOOM” are open to all and can be scheduled by appointment at Mindful Medicine Rochester. $25 per 25-minute session.