Mercer Gallery kicked off the academic art season with "Elliott Arkin: Lifetime Achievement Exhibition" a retrospective of five decades of the artist's work. Arkin is known for his clever, satirical sculptures that poke fun at everyone from artists, art dealers, and art critics to politicians and popes. While the sarcastic pieces punch at exalted art, religious, and political worlds, they don't so much convey contempt as they remind the subjects and viewer not to take everything — including themselves — so seriously.

This is arguably a great message for the throngs of art students who will be exposed to the work during its residency at MCC, and exposed to the burn of real-world criticism should they keep up their craft after graduation. A career in art — or anything else, really — requires not only skill and initiative, but also skin that grows thicker in proportion to success.

I've chortled at Arkin's spot-on side-eye work for years. Some gems not present at this show include "George W. Bush at the Republican National Olympics," which has the former prez hoisting the U.S. Constitution like a discus he's about to wing as far away as possible, or "Underdog Lifting a Meteor off the Pope," which is exactly what it sounds like, and based on Maurizio Cattelan's controversial "La Nona Ora" ("The Ninth Hour").

Much of Arkin's work features such absurd additions to the historic and contemporary art worlds he references. Next to a little lawn-mowing Picasso is a similarly-sized Georgia O'Keefe, dwarfed by viewers and surrounded by her frequent muses: flowers and a steer skull. While the statues turn art icons into kitschy garden gnomes, the title of the O'Keefe piece, "The Physical Impossibility of Death in the Mind of Someone Living," is stolen from divisive artist Damien Hirst's shark tank sculpture, and twists the image of an old woman gardening into something far more profound, and perhaps, she is unaware of futility. But the sardonic smirk on her wizened face says otherwise.

This reproducing and remixing of art and iconic figures is apparently something Arkin has always done, as proven by the presence of three sculptures that kid-Arkin created: a pheasant (done at age 8), Joe Di Maggio (age 9), and a Jester copied from a Rockwell painting (age 14). Though rough in comparison to his later work, these pieces prove an impressive early start.

Some works are just playfully punny, such as "Shrunk," a teensy Sigmund Freud, reclining on a couch under a bell jar near the gallery entrance. A magnifying glass offers the viewer maximum scrutiny of the famous psychoanalyst.

The necessary magnifying glass is also offered for viewing "Slides," a set of wee 3D figures framed in the thresholds of old-school slide photographs. These include the likes of sculptor Tom Otterness; NYC Ballet principal dancer Wendy Whelan; curator, critic, and artist Robert Storr; and many other artworks and personas. Again, the concept of scrutiny plays pretty heavily here, as does the idea of the actions of a small individual or work having a larger impact in the world. Or maybe I'm just projecting.

One hefty piece, "Le Cadre," or "The Frame," constructed between 1988 and 1990, stands out — and not just because of its massive, gilded presence. The piece differs from other works represented in the show in that it's huge, though it does contain the diminutive figures and winking wordplay Arkin is known for — 'cadre' also alludes to the art gang who swarm the borders of the frame. 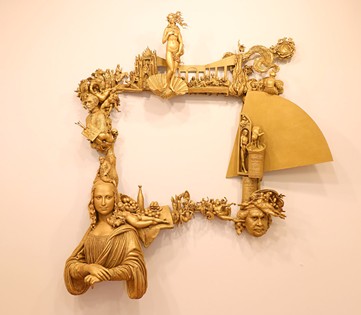 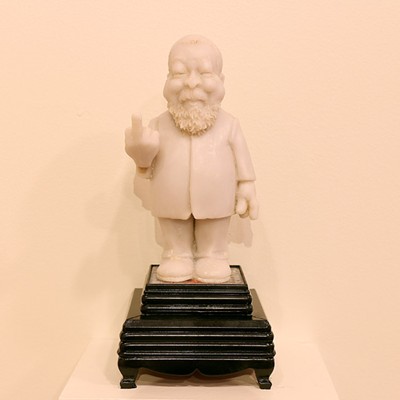 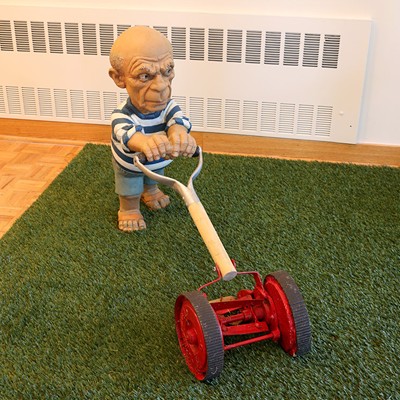 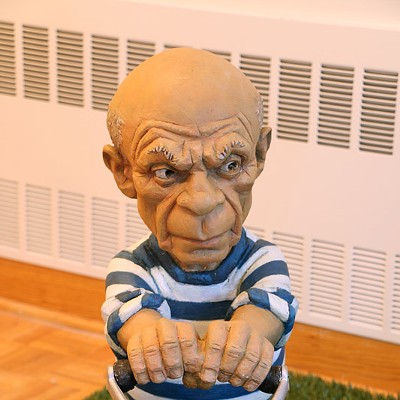 The frame's four sides are comprised of detailed three-dimensional recreations of historically important (and household name) works of art and artists, offering a fun "Where's Waldo" kind of hunt for elements of da Vinci's "Mona Lisa" and "The Last Supper," Titan's "Venus of Urbino," Picasso's "Les Demoiselles d'Avignon," Michelangelo's "The Creation of Adam," Warhol's Campbell's Soup cans, van Gogh's "The Starry Night," and Botticelli's "Birth of Venus," among others.

With its open center devoid of any artwork, the piece seems to insinuate that all future creations are created within the framework of these visions that float through our cultural consciousness.

My personal favorite work in the show — and there's lots to like — is the small, pale statue in tribute to Chinese artist Ai Weiwei, who smiles pleasantly while flipping the bird. The gesture nods to Ai's photo series in which he gives the finger to monuments like the White House and Tiananmen Square, while the title, "1/1,000,000,000," alludes to Ai's million ceramic sunflower seed project, which in turn alludes to China's population.

Arkin himself isn't immune to his jabs. He's the subject of his own work in the set of "Slides" and other sculptures, and the fact that he's titled this show, held in a modest college gallery, "Lifetime Achievement Exhibition," is a bit tongue-in-cheek, too. Mercer is not as lofty a venue as the sites of past projects he's done with Whitney Museum of American Art, Louvre Museum, and Tiffany & Co. But exposing students to artists of Arkin's caliber speaks volumes about gallery director Kathy Farrell's commitment to the art kids.

See more of Arkin's art on the online version of this article.