Three Heads puts down roots in Neighborhood of the Arts

Three Heads Brewing was born out of a love of good people and good beer. Six years later, Three Heads opened its new brewery and tasting room in the Neighborhood of the Arts (186 Atlantic Avenue) based on that same philosophy.

The "Grand Opening Weekend Spectacular" in June surpassed the expectations of everyone. "It was pretty crazy, honestly, more intense than I thought," says Geoff Dale, one of the brewery's co-owners. "We had a line out the door. It was a 45-minute wait to come in and get a beer, and people were just like 'Okay' — we were just having fun."

Three Heads didn't have a base of operations until now. The beer was brewed at CB Craft Brewers in Honeoye Falls, and Three Heads would host events with Lovin' Cup, like Homegrown and the Hometown Throwdown. Having its own space allows the brewery to not only host more events but also increase production of its wildly popular beers. The brewery is the second largest in Western New York behind Genesee. 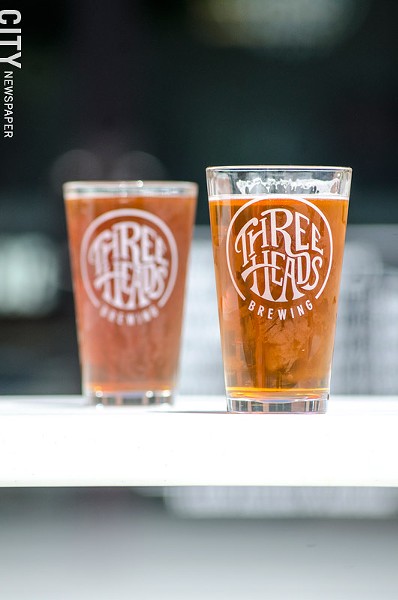 The plan is to produce 10,000 barrels a year, a change that will benefit not only the brewery but the consumer as well. For example, the brewery will now be able to sell six-packs of its Kind IPA for the same price as it was selling four-packs before. "I like to consider ourselves modern hippies," Dale says, "whenever we get into business with people our goal is to have everyone winning. If everyone is winning, everyone is happy, and they are going to be better because they are going to have a better disposition."

The new, massive complex houses the production floor, a tasting room, and a large sun-soaked patio. The tasting room has communal tables that encourage different groups to get to know each other over a pint. "We have a biker group that lives across the street that are the nicest guys in the world and are here every day," Dale says. "They sit next to guys that are coming from offices downtown and strike up a conversation with each other, and it's like, 'This is cool, beer brings people together.'"

The tasting room also features a stage for live music. The brewery doesn't serve food, but it encourages patrons to bring their own. On tap in the tasting room is a selection of beers not available outside of the brewery (look for a pilsner to be on draft soon as well as a fruit beer). 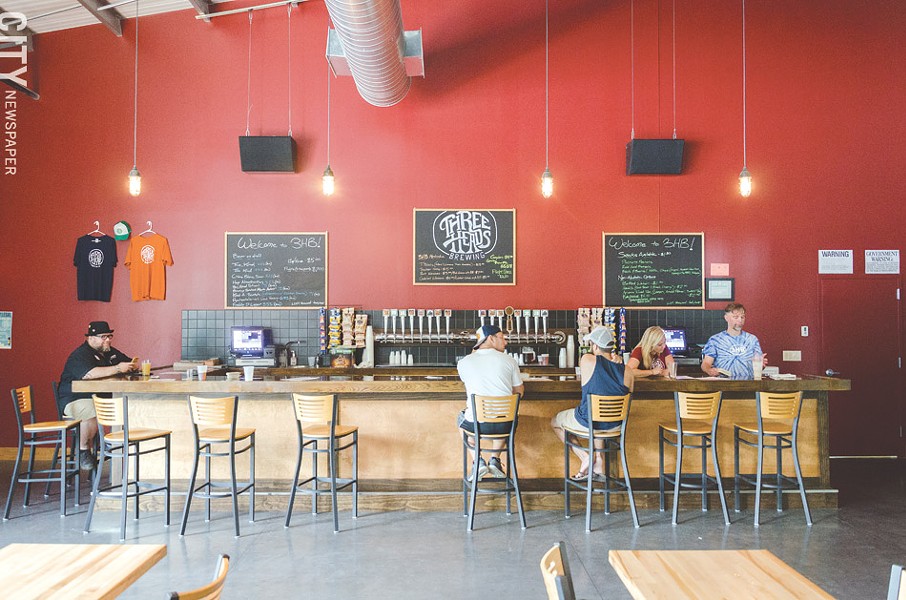 Dale meanders about the tasting room with a beer in his hand, greeting staff and customers with a warm smile and hugs — he's clearly a man happy with his lot in life. "Honestly, in the end, it doesn't take much to have a good time: get some beer, get some music, have a couple people show up, throw in some food for good measure. Sounds to me like you've got a wicked good time."

Coming up in July at the Rochester Public Market (280 North Union Street): Bands on the Bricks on Friday, July 22, at 6 p.m. featuring music by Cats Under The Stars and the Food Truck BBQ Contest; and the next Food Truck Rodeo will be held Wednesday, July 27, 5 p.m. to 9 p.m.

Lento Restaurant (274 North Goodman Street) has two pairing dinners in July. On Wednesday, July 20, at 6 p.m., the restaurant will host a Beers of New York Pairing Dinner featuring selections from Captain Lawrence, Empire, Genesee, Hamburg, and Saranac. On Wednesday, July 27, at 6 p.m., a whisky pairing dinner with Forty Creek Whisky will take place. Call 271-3470 for ticket prices and more information on both events.

Another Clam Bake in the Beer Garden will take place on Wednesday, July 20, at 5:30 p.m. at the Genesee Brew House (25 Cataract Street). Due to demand, these clambakes are taking place a few times a month, but get your tickets early because they tend to sell out. Tickets must be purchased in advance and are $25 for two-dozen clams, corn, salt potatoes, and a beer. Purchase tickets at eventbrite.com (search for Genesee Brew House).

Nosh has opened at 47 Russell Street in the Neighborhood of the Arts.

Meraki Coffee Co., a pop-up coffee bar, will be serving drinks at Cheesy Eddie's (602 South Avenue) on Thursdays and Fridays from 8 a.m. to 6 p.m.