September 11, 2020
You can dig into Rochester’s deep grab bag of sound and pull out something totally different each time. Many local musicians are playing in multiple, overlapping styles, in search of their own hybrid strain.

These three musical artists are worth watching for the way they modify the classics with a mishmash of genres. 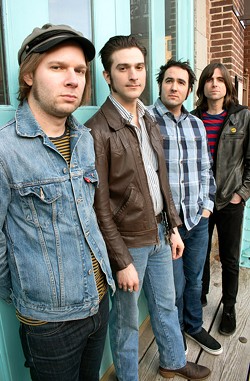 Though the engine that was the Rochester rock band St. Phillip’s Escalator roars no more, two former members — guitarist Ryan Moore and drummer Zachary Koch — have channeled its energy into an authentic shake, rattle, and wail that rock ‘n’ rollers crave.

Enter The Low Spirits, whose twin-guitar attack, augmented by the pump and wail of classic Farfisa organ, churns out heavy rock with garage-band leanings. Guitar player Michael Maier (of the folk-based group The Incantations) and bassist Richie DeJohn (from the punk outfit Rational Animals), help Moore and Koch suss out the sound.

“We wanted to target garage rock more and not just have elements of garage,” Koch says.

The Low Spirits’ music has plenty of primal preening. The band is focused on primitive garage punk, mining influence in the works of Nuggets, Blue Cheer, Cream, and Jimi Hendrix.

But their approach more than merely plug-in-and-peel-out. Moore, for instance, has reigned in his guitar’s volume and violence to share space sonically with Maier. Their shifts in volume and speed are dynamic.

“I’ve never played with a second guitar player before,” Moore says. “You can do so much more.”

Taking on the role of sound engineer, Maier recorded one of The Low Spirits’ early shows in May of last year and posted it on its Bandcamp page. The resulting three-song EP, “Live at Photo City” — with all its snotty defiance and swagger — is a window into the band’s future direction.

“Live at Photo City” was recorded loose and loud, with plenty of room for headbangin’ and hip shakin', but there are also excellent dynamics and control throughout.

The sound is similar to The Kinks’ treatment of The Plague’s “Go Away.” Fans who dig vintage rock — and even those who don’t know they do — will love it. And though the sound isn’t St. Phillip's Escalator, it has gotten a collective thumbs-up from SPE boosters.

For the moment, the band is sequestered in an undisclosed rehearsal lair, hammering out their sound without overthinking it.

“We usually come to the table with the bones of a song and just kind of work them out from there,” Koch says.

The Low Spirits have their eyes on stamping out a seven-inch record, but they have little interest in releasing a full-length album.

The Reverend Kingfish is a bit of an oddity, an outlier seemingly plucked from the Jazz Age. In his natty duds and cocked fedora, he waxes profane in a world he’s made for himself. Anyone who find themself at a Reverend Kingfish show will hear songs about characters who are “hellbound,” but whether that’s good or bad is a matter of perspective.

His songs are about infidelity, booze, violence, and death, as well as tunes from the Great American Songbook. With laconic twists of phrase and rhythm changes on his arch-top guitar, he’ll remind you of the late singer-songwriter Leon Redbone.

“The problem is the songs I write are distasteful to a lot of people,” the good Reverend, a.k.a. Stephen O’Brien, says. “And they tend to focus on uncomfortable topics.”

Kingfish’s style is a casual lope across mellow jazz progressions. Cover tunes — from Fats Waller and Jimmie Rodgers to Bessie Smith, Jelly Roll Morton, and Blind Blake — are also a big part of what he does.

His jazz-infected blues sound like lullabies sung by Anton LaVey. They are beautiful, with classic panache and parlance, which seemingly fly in the face of the Reverend’s dark worldview and gallows humor. The songs contain a pinch of noirish sarcasm, too.
“Sometimes I feel like the Mister Rogers of depravity,” he says. “I want people to be comfortable in their own skin. Even if society doesn’t. I don’t think I can do it any other way. It just happens naturally.’’

Perhaps unsettling to some, Kingfish presents macabre subject matter with nonchalance and sunshine in his voice. “Graveyard, graveyard, I don't wanna live no more,” he sings casually, but with conviction, on “Graveyard Blues.”

“I like to talk and sing about the inside of people, the part they won’t let out, the part they are hiding,” he says. “Everybody's got it. I like bringing this to the surface. Not just because it’s fun, but to let people know you can have these feelings, even if society doesn’t accept them. You're still OK as long as you’re not hurting anyone. Rochester is a fairly hip place, you can get away with a lot more than you can in, say, a place like Biloxi.”

The Reverend Kingfish has roots here. He graduated from Penfield High School before packing a grip and heading out west for a “business-type career.” He came back east two years ago and began performing, which is something he’d never done before.

“I hadn’t had any inspiration,” he says of his delayed creative endeavors. “Now, my music comes in two parts. I cover old blues and jazz from the '20s, and soon after arriving back in Rochester, I started to get my own ideas for writing my own songs.”

But don’t hold your breath for a Reverend Kingfish record. He ain’t doin’ it.

“I don’t really have any interest in recording,” he says. “It sounds like a pain in the ass and from what I hear, it’s expensive. I’m only interested in performing in front of an audience.”

If that sounds like he’s selling himself short, it’s because he is.

Alex Patrick and The Noise

Rochester musician Alex Patrick and his new band The Noise have an undeniable reverence for classic American songcraft.

You may know Patrick as the frontman for Dangerbyrd, a band that plays the kind of music that was instrumental in the initial big bang of rock ‘n’ roll. His passion for the music and its history is palpable.

But The Noise began as an intentional departure from Dangerbyrd two years ago. It all started when Patrick haphazardly booked a gig without a backing band in place.
He was having trouble assembling the entire quintet, and Patrick found himself routinely turning down gigs that had been scheduled for Dangerbyrd.

His patience was running out. He was going to have to start another band. The Noise was the result.

“I was starting to get frustrated having to turn down so many gig offers,” he says. “I figured I could find something to do that was fun by the time a show that Dangerbyrd couldn’t do rolled around.”

Patrick enlisted the remaining members of Dangerbyrd — bassist Schuyler Skuse and Chris Coon, who switched from keyboards to saxophone — to play with him under The Noise banner. Drummer Aaron Mika, who had played with Skuse in the soul band The Shine, also came on board.

Despite Patrick’s leadership roles in both Dangerbyrd and The Noise, there are noticeable differences between the two acts.

Dangerbyrd is a collective of songwriters and singers who play mainly original music. Patrick considers it electrified folk with a rock 'n’ roll beat.

The Noise, on the other hand, is about pure fun, with less emphasis on rehearsing. The band provides Patrick with the opportunity to see friends, sing and scream loud, riff on guitar, and play music that deserves to be heard.

“Both bands are bar bands with ultimately the same purpose — making people dance and drink — but they fit into that scenario in opposite ways,” he says.

Because Patrick and his musicians had only a week to prepare for the first Noise show — in August 2019 at Skylark Lounge — performing songs he had already internalized seemed the best option.

“It's nearly all Black rock ‘n’ roll and blues music,” he says. “That is what was on my mind back then, and still even now. That music has shaped my entire life and I owe everything to it. Rock ‘n’ roll was created by Sister Rosetta Tharpe and Little Richard, queer persons of color that still don’t get the recognition they deserve.”

The Noise’s leader is keen to differentiate between a good song and a great song.

“I think a good song is one that can be interrupted and played in many fashions,” he says. “That’s what folk, blues, country, and jazz artists do. If a song can be played fast, slow, in minor or major, and still move the audience, then it’s a good song.

“A great song does that, but alters one’s life in a meaningful way. Great melodies inspire great lyrics. Those songs are forever. I hope to catch one someday.”