This thriller has car chases and history lessons 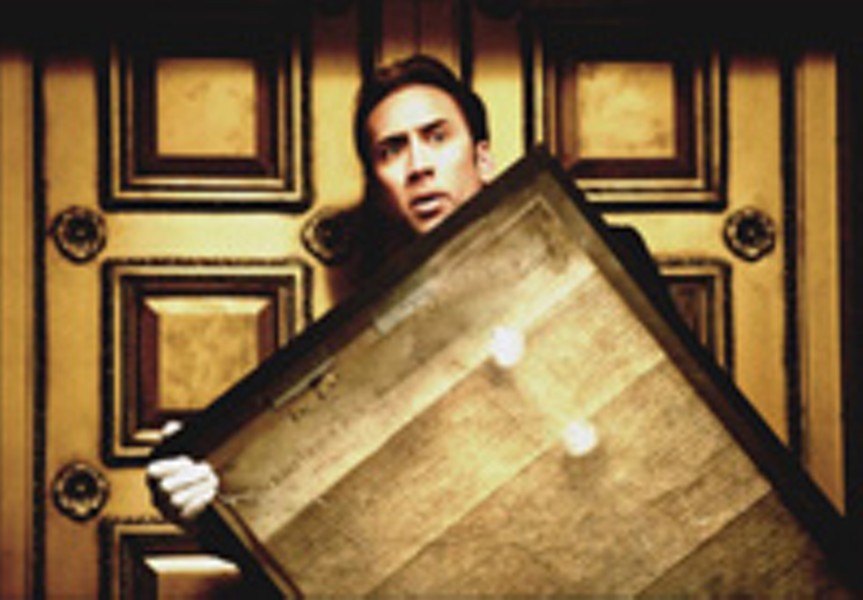 The search for a special object that combines in itself history, legend, and enormous monetary value energizes innumerable adventures in both literature and the cinema. Quests for some precious and numinous treasure --- the Holy Grail, the Ark of the Covenant, the Maltese Falcon, for example --- inspires heroes as different as the Knights of the Round Table, Indiana Jones, and Sam Spade, along with all their fictional progeny.

National Treasure introduces a new searcher, Benjamin Franklin Gates, and an ancient treasure, the priceless spoils of thousands of years of civilization, from the Egyptian pyramids to King Solomon's Temple, allegedly plundered by the Knights Templar.

Within its primary story of the hunt for the Templar's treasure, the picture combines a number of action genres, including the big caper flick and the pursuit thriller, informing the whole mixture with a dense mystery, and punctuating the plot with the usual automobile chases, shootouts, and narrow escapes from danger. That combination, overlaid with several excursions into both trivial and important matters of the nation's past, curiously results in an experience rather like thumbing rapidly through some wacky alternative American history textbook.

Nicolas Cage plays Benjamin Gates, an expert in history, archaeology, engineering, and underwater diving, who as a child learns the story of the great treasure from his grandfather whose own grandfather's grandfather (got that?) first heard it from one of the signers of the Declaration of Independence.

Ben devotes his life to finding the fortune by following a series of clues, mostly in the form of riddles and cryptic symbols, leading from one discovery to another. A document from the early 19th century mentions "Charlotte," which leads Gates and his companions to an old ship of that name buried near the Arctic Circle. On the ship the explorers find a meerschaum pipe engraved with a riddle, which ultimately causes Gates to conclude that a map is inscribed in invisible ink on the back of the Declaration of Independence, which leads the crew to Washington, Philadelphia, Manhattan, and so on almost ad infinitum.

An audacious plan to steal the Declaration ignites the caper plot, which also pits Gates against Ian Howe (Sean Bean), a former colleague turned competitor, whose gang breaks into the National Archives at the same time that Gates engineers a more subtle and complicated scheme. The pursuit plot starts at that point, with Gates, his assistant Riley (Justin Bartha), and an expert from the Archives, Abigail Chase (Diane Kruger), fleeing the competing gang and the FBI while also following the elusive trail of clues to the treasure.

The story seems inspired by a piece of preposterous twaddle that's been riding the bestseller lists for what seems like a lifetime, The Da Vinci Code. The movie employs the same devices of a series of incredibly abstruse clues and hints which constantly lead to others, pausing periodically for the characters to deliver learned discourses on history and science, heavily sprinkled with the sort of arcane trivia that passes for knowledge. The writing might not be quite so bad as the book, but the intellectual and emotional level matches it perfectly.

More important, somewhat like the novel, National Treasure also exploits the notion of a secret society descending from the Knights Templar, namely, the Masons, who in the familiar legend, led both the American and French Revolutions, influenced the founding of the United States, and way back when, even built the great pyramids and King Solomon's Temple (most of the Masons I've met wouldn't know which end of a trowel is up). As a result the long, complicated puzzle and its utterly ridiculous series of solutions depend almost entirely on Masonic symbolism and lore.

The guided tour of several famous American institutions and monuments in Washington, Philadelphia, New York, and Boston --- the Lincoln Memorial, the Library of Congress, Independence Hall, Trinity Church, the Old North Church, etc. --- locates the picture in both history and contemporary reality. Since each place also offers the garrulous Gates an opportunity to lecture his companions and the audience on the intricacies of Freemasonry, the underside of American history, and assorted learned minutiae, the movie carves out something of a new genre for itself, which might be called the pedantic thriller.

His mostly expressionless, generally lugubrious countenance and his weak whispery voice hardly suggest anything heroic or even intelligent about Nicolas Cage, though now and then his donnish manner attains a certain faintly comic lightness. Justin Bartha makes some of the nonsense bearable by uttering rude noises and rolling his eyes when the professor exceeds normal human limits of boredom and pomposity.

The only perilous element in this thriller involves the notion that people may actually believe its version of history. In a time when the leader of our great land refuses to accept the findings of science and scholarship, that suggests something much more frightening than car chases and gunfights.