For one night each month, the girls-only Ladies' Night takes over Breaking Free Skatepark

Breaking Free Skatepark is down a long driveway off of University Avenue. The largest indoor skatepark in New York State, Breaking Free is located in what feels like a giant warehouse; its towering ceilings make the skaters, bikers, and scooter-riders look tiny in comparison.

There's a long, L-shaped counter displaying every imaginable piece of equipment: scooter handles, wheels in every color, skate decks, helmets, stickers. There are boards, bikes, and gear to rent, and snacks and energy drinks to purchase behind the cash register.

The temperature in the skatepark is tropical.

To the right of the entrance, parents congregate on a tall wooden platform overlooking the park's 20,000 square feet of ramps, rails, and half pipes, and keep an eye on their kids.

One pre-teen girl with waist-long, strawberry-blonde hair skateboards down a ramp, attempting what one can guess is a new trick. As she makes her way down the incline, she picks up too much speed, her skateboard goes flying out from underneath her, and she hits the ground.

"You were so close! You almost had it! You'll definitely get it next time!" Behind her, two other girls yell and cheer her on as she readjusts her bright green, sticker-covered helmet, gets back on the board, and makes her way over to the ramp to try again.

Right above the "gnar bowl" — really more like an empty in-ground swimming pool — an oversized silhouette of Susan B. Anthony's profile peers over a vert ramp, as if she's keeping an eye over the park. Tonight, female skaters have free reign over the usually male-dominated territory. It's the fifth Ladies' Night, and girls and women of all ages and skill sets have the run of the park. The first Ladies' Night event was held on March 27, and the events are publicized through Instagram, Facebook events, fliers, and word-of-mouth.

The woman behind these Ladies' Nights is Rochester local Scarlett Markham. After seven years in Brooklyn, Markham moved back to Rochester in 2013 and now works at Parkleigh on Park Avenue. When the 28-year-old isn't creating zines, lapel pins, and other crafts for her personal art business, Flour Pail Kids, she's on her skateboard.

Aaron Costa, owner of the Park Avenue skate shop Krudco, along with Friends of ROC City Skatepark President Alan Presutti, approached Markham about the need for female skateboarding opportunities in the city.

"When I first came back to Rochester," Markham says, "I walked into Krudco and Aaron was like, 'Oh, you skate, and you're a woman. Do you want to teach other girls how to skateboard?' I didn't know anybody, and I wasn't confident about my skills. I was wondering, 'Am I gonna be judged?'"

Judgment is a real concern for women in the skating community. "We're talking about sexism — yes, there is," Markham says. "On top of that, in skateboarding, there's all sorts of dos and don'ts."

Two fathers, Ryan McKenna and Elliot Weininger, say that their daughters are more enthusiastic and the environment is less intimidating at Ladies' Nights. "The boys are always nice, but it's nice for her not to stand out," one of them reasons.

"I'm more scared than she is," one father says to another as they watch their kids skate.

Markham admits that she was on board with the idea of creating a Ladies' Night for a seemingly selfish reason: "I wanted other women to skate with," she says. It's easy to feel isolated as a woman in male-heavy spaces. While men are often supportive, they sometimes slip up.

"I don't know if it's a privilege, but it's an insight if you ever get to be a part of this community of men and they forget to censor themselves," Markham says. "It's scary, it's disgusting. It's that 'locker room' talk crap. No. It's way uncool. Don't forget that women exist." 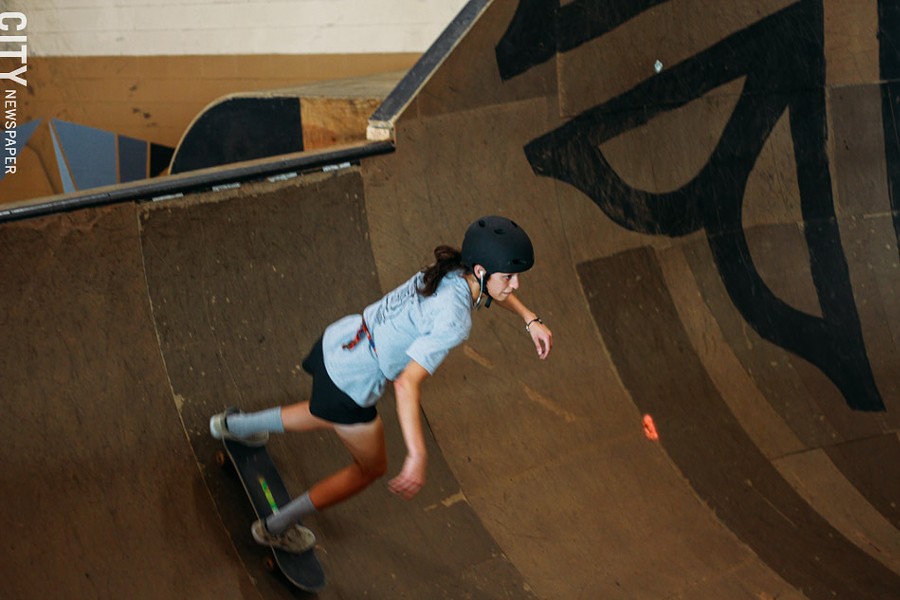 Ladies' Night is a judgment-free zone for skaters of all ages and skill sets, ranging from those who have never touched a skateboard to others who skate on a daily basis.

Giovanna is 12 years old, and it's her first time at Ladies' Night, but her third time at the skatepark. Her mom drives her in from the suburbs because Giovanna's friends don't skate — it's just not something they're interested in. When she heard about Ladies' Night, she knew she had to come skate with the new friends she'd made from the park's beginner sessions. Ivy Burruto, 23, is one of Markham's coworkers from Parkleigh. It's her first time trying anything remotely like this, so she opts for a scooter — the handlebars give her more leverage.

Rosy-cheeked Marli is 11, and it's her first time at Ladies' Night, too. She adjusts her wrist pads, and explains that she got her little brother interested in skateboarding, but he was curious about why there was no designated "boys'" night.

"There are usually boys there," she told him. Marli says her brother understood.

While it's enormous, Breaking Free tends to get jam-packed, especially in the colder months, which adds another significance to Ladies' Night events. "It's swamped in the winter," says Katie Epner, another Ladies' Night attendee. It's understandable that people who are new to a relatively dangerous sport like skateboarding or biking wouldn't want to share a cramped space with those more experienced. There also isn't really anywhere else for skateboarders to go, regardless of gender.

"It's a shadow on our city that we don't have a city skatepark," Katie Woodson says with a sigh, re-lacing her roller skates in one of the park's retro booths. Woodson, a former roller derby girl, has two daughters who she insists are future skaters. A downtown city skatepark has been a contentious topic over the last decade or so.

Kids "could be inside playing video games," Woodson says. She's confident that a city skatepark would promote exercise, get kids outside in the sunshine, and encourage a supportive athletic culture. Markham agrees with her. "It's good for your community," she says. "It gets kids off the street. This is for everyday people. This is something people will actually use."

Dave Raffa, who "is the whole business" of Breaking Free Skatepark, is of the same opinion, and thinks that everyone should at least try to skate. "It gets kids on wheels," he puts it plainly, opening a half-melted granola bar. He also advocates for the psychological benefits of skating, explaining that incentive-based rewards, like the rush of serotonin achieved after landing a difficult trick, teach kids the power of determination.

"It's the best thing ever," he says. "It's cool and it gets kids off the couch." He's also happy to see how successful the Ladies' Night events have been so far. "Every time a girl walks in, I tell her about Ladies' Night," he says over the echoes of grinding wheels cruising down ramps.

Markham says she started these events because she cares about her community, and she wants to expand her inclusion efforts to focus on adult skaters — those who have always wanted to try skating, but gave up because they feel like they're too old.

"We're in a world where 'women can't do this,' and 'Serena Williams would have come in 700th place' — I don't want to live in that world," she says. 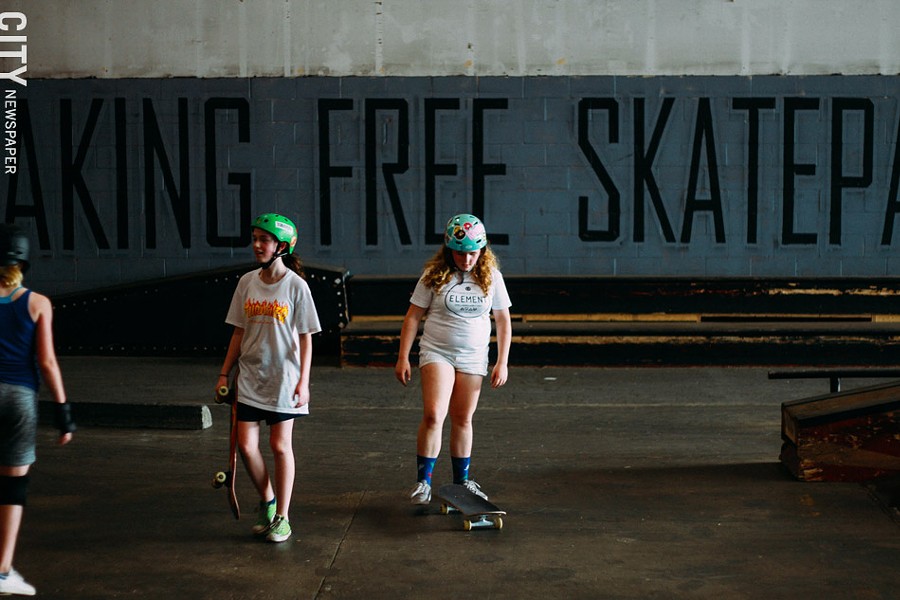