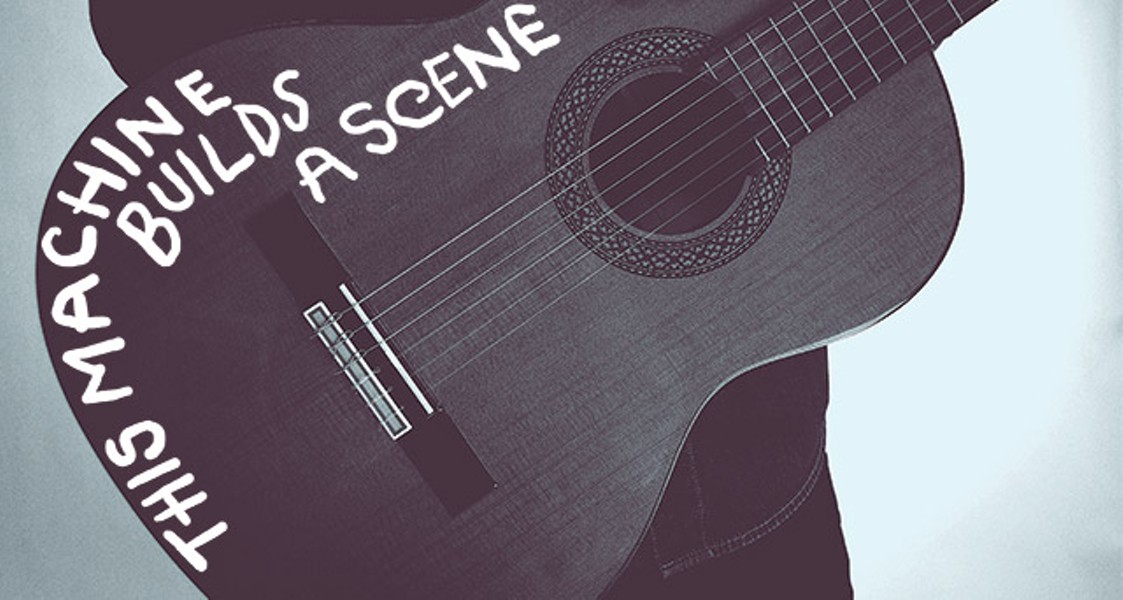 For all the folk music that's made in the Rochester area, there isn't one, all-encompassing example. In any given week, you might hear The Crooked North play original bluegrass tunes at Abilene Bar and Lounge, Roger Kuhn putting down country-blues licks at The Little Theatre Café, or The Honey Smugglers playing jamgrass at Flour City Station.

You might come across Cammy Enaharo, Susanna Rose, or Elephino performing indie originals with a homespun flair at the Bug Jar; Canandaigua's Dirty Blanket might be heard playing rowdy Americana at Three Heads Brewing; or just down the road, up-and-coming folk duo The Sugargliders could be putting its spin on traditional music at Photo City Improv. There are also always various jam sessions going on in bars throughout the city.

Despite the stylistic distinctions, it all falls under the musical umbrella of "folk" — although, calling it acoustic-based Americana might be more accurate. The Rochester folk scene is a rich mosaic: Up close, each artist, band, and musical entity has its own identity and aesthetic. Taken as a whole, the community is complex, vibrant, and impossible to pin down.

Everyone has their own definition of folk music. It really depends on who you ask. Bill Destler, former RIT president and an avid banjo collector, sees folk as traditional music that eschews commercialism and is handed down to subsequent generations. Allen Hopkins — a co-founder of Golden Link Folk Singing Society and booker for the local concert series Rochester Folkus and Tunes By the Tracks — points out the critical element of social protest and commentary. 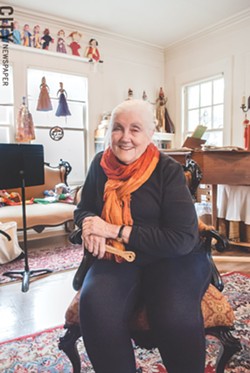 Several musicians highlight the importance of participatory music in the folk scene. "There's less distance between the audience and the performer," says Mitzie Collins, a hammered dulcimer specialist and co-director of the Striking Strings Hammered Dulcimer Ensemble. This aspect is a common denominator that unites the regional folk scene's musicians, regardless of style.

"Folk music, on some level, has to maintain a connection to participatory music and culture," says Ben Proctor, multi-instrumentalist and vocalist of The Crooked North. For Proctor, amateur musicians are integral to the scene.

At Bluegrass Tuesdays at Johnny's Irish Pub, bands like The North Star String Band and String Theory lead jam sessions and encourage other musicians to sit in. And Golden Link hosts Tuesday night sing-arounds at Twelve Corners Presbyterian Church. "It's all about building community," says Janice Hanson, Golden Link's Concert Chair. "There's something about the simple act of singing together that connects people, and it can be incredibly moving."

Defining the genre of folk music can get murky. Naples-based musician Aaron Lipp is steeped in traditional styles, but he and his bands have regularly broken the mold. His current group, Aaron Lipp and The Slack Tones, mixes rockabilly, old-time, and bluegrass. Meanwhile violist Zac Lijewski, of A Girl Named Genny and the jamgrass outfit The Honey Smugglers, suggests that the terms "folk" and "Americana" can be used interchangeably.

Singer-songwriter Jackson Cavalier isn't as open to vague definitions, though. He says he has difficulty labeling bands that simply add bluegrass tinges to acoustic rock as "folk music."

"With these songs," Cavalier says, "you should be pursuing some sort of truth — whether it be for the individual or just to express yourself, or to try and help others reach that same sort of conclusion, or just making a point and trying to prove it with your song."

Specific instrumentation, lyrical content, and stylistic integrity notwithstanding, perhaps what unites Americana, folk, and bluegrass is a shared aesthetic that comes from the music's common roots. There's a nostalgic vibe that's difficult to pin down.

When asked what keeps him returning to the well of acoustic-based music, Lipp sounds wistful. "It's a very charming thing to be brought back in time by simple lyrics and simple melodies," he says. "Nowadays, even if it's conscious or subconscious, I think it's a relief in some way to hear something that sounds so old and timeless in a society that is so fast-moving and based around computers and cell phones and Internet and all these things that sort of distract us from real life."

The stylistic differences within the Rochester folk and Americana scene may be more a result of geography than philosophy. Area folk musicians are willing to travel long distances to ply their trade, and an artist's location in the region doesn't strictly define them — but it's often telling. This is especially evident when looking at the music being made in Naples, southwest of Canandaigua Lake. Lipp says the vibe there is different from that in the city.

Lipp, who is well-versed in old-time fiddle music, Appalachian, and bluegrass, and is a fixture in Naples' music-making scene, gives a vivid example: "Right now, I'm sitting in the Naples Valley, and it's extremely quiet, and there's hills surrounding me, and there's trees everywhere. It kind of makes me want to have a five-hour square dance at this crazy café downtown, and have 200 people there, just raging all night."

Banjo player Cordelia Machanoff, formerly of the bluegrass and folk outfit Mulberry Soul — which was born out of the Folk Art Guild in nearby Middlesex — says it's easier to tap into a certain folk sensibility when making music in a rural area. "Playing like an old-time or bluegrass style of music feels very natural and organic in a rural setting like Naples or Middlesex, and then in Rochester, you can fabricate that feeling," she says. "I feel like those musicians have to work harder to create that vibe or energy." That said, Machanoff notices a mobility among rural and urban folk musicians in the region, in which the Rochester-Naples connection is strong.

While the Rochester folk scene is complex and includes numerous styles, it faces intractable social issues that are endemic to contemporary culture as a whole. Those issues can take root, eating away at the participatory atmosphere of folk music. Aside from singer-songwriter showcases, there are few examples of consistent crossover between younger artists and audiences and their older counterparts. And the folk genre is still predominantly white, with little diversity to break up the systemic cultural segregation that has set society back for generations.

Another pervasive problem is the lack of female representation — the majority of bands are made up of men, and there's a lack of female artists featured in many of the concerts and festivals. "It's hard to come into a scene when you don't see other examples, you don't see yourself up on stage," Machanoff says. 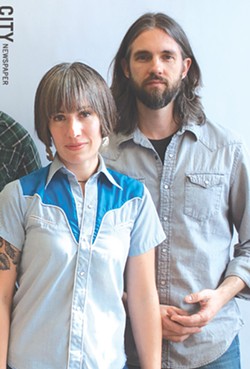 There's a strange contrast between generations here. Musicians who grew up with the music of Joan Baez, Judy Collins, and Joni Mitchell, and who have had a more direct connection to the folk revival of the 1960's, seem to notice gender inequality in the local music scene less. Singer-songwriter Connie Deming says she doesn't see a gender gap, citing concerts like local songwriters' showcases in which men and women tend to be represented more equally.

"I think the women who play music in the Rochester area are represented well because they get themselves out there," says singer-songwriter Maria Gillard. "I just think there is a higher ratio of men to women in the music scene. We can still encourage more girls to take up an instrument, sing, and write songs as they are growing."

Still, prohibitive behavior can result in an antagonistic, even misogynistic attitude — inadvertent or otherwise. "We want to be included, and then you look at some of the things that are said on social media and some of the ways that events are promoted, it's very male-centric," Rita Proctor says. "So it almost feels like, whether it's intentional or not, we don't feel like culturally we're being welcomed into that scene."

The concern isn't just about Internet trolling, but about the atmosphere at shows. "There's also just kind of the hassle of it, as a woman, putting yourself in a very visible position," Machanoff says. "It is not only uncomfortable; it can be dangerous. I have been followed."

Yet certainly, inappropriate or harassing behavior isn't indicative of the entire community. "All the people that really helped me get started in the music scene and really encouraged me and helped me get shows, gave me a guitar — they're all my men friends," folk singer-songwriter Susanna Rose says. "So it's not like men are trying to keep women out of the scene. I don't think it's that at all."

Practically speaking, there are concrete things that can be done to increase inclusivity. "Invite more women to sit in with your band," Rita Proctor suggests. When offering names of potential artists to those booking shows, she makes a point to mention at least three women before anyone else.

Greater inclusivity with regard to gender isn't the only need. Several area folk musicians speak about wanting more musical dialogue between people with varying racial backgrounds, between older and younger generations, and between traditionalists and non-traditionalists.

Ultimately, folk music shows no signs of slowing down in Rochester. Whether it's at a more traditional gathering of like-minded musicians or a rousing concert in a crowded bar, there's a passion for folk music that can't be satiated. "We can't stamp out real folk traditions," Mitzie Collins says.