This election is about character — our own 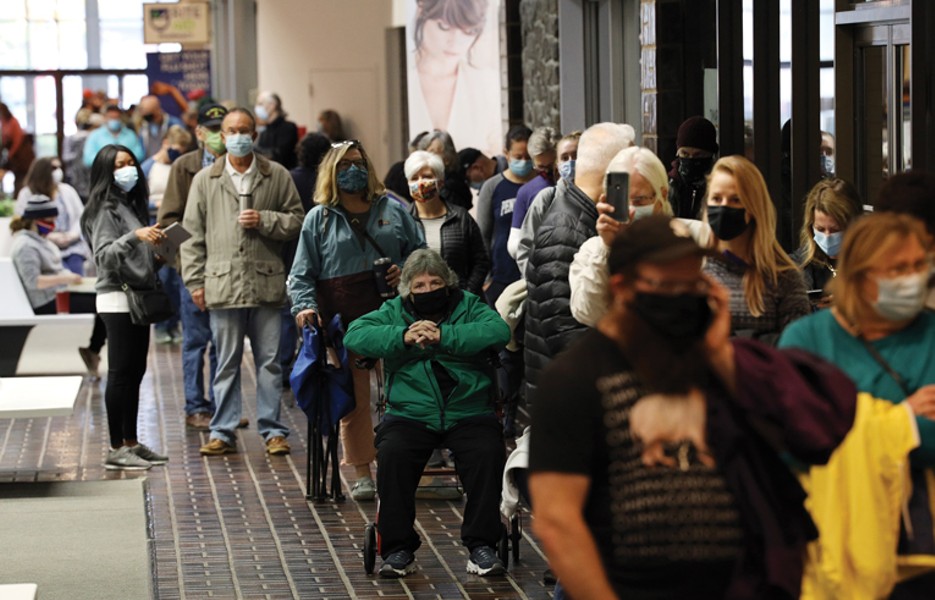 PHOTO BY MAX SCHULTE Voters waited in long lines at Perinton Square Mall to cast their ballots early.
In the coming days, perhaps weeks, the election will be over and we will know what Americans value.

As of this writing, though, only a few days of early voting have passed. Tens of thousands of voters in Monroe County and many tens of thousands more across New York waited in long lines that snaked around buildings and stretched for blocks outside polling sites.

Who among them made the right choice?

Every one of them with whom I spoke recognized that the election was less about ideas than about contrasting visions of what the United States is, should be, and can become. It was a reflection of character — not only of the two men running for president, but our own.

We’ve heard this in some fashion from the candidates themselves.

“At no time before,” President Donald Trump said in August, “have voters faced a clearer choice between two parties, two visions, two philosophies or two agendas.”
In the final presidential debate before the election, Joe Biden echoed a theme of his campaign when he looked directly into the camera and said, “You know who he is,” referring to Trump. “You know his character. You know my character.”

In the general sense, “character” means the mental and moral qualities distinctive to a person. But what we’re really talking about is good character — one that nurtures the once universally celebrated traits of courage, composure, integrity, and justice.

We don’t value those traits anymore the way we should. Character has been overshadowed by other attributes, namely status, fame, and financial success. That much became obvious with Trump’s election in 2016.

He flaunted bad character and became president. His own words about grabbing women, mocking a disabled reporter, and referring to veterans as “suckers” and “losers” couldn’t overpower America’s fascination with his celebrity and purported business acumen.

One powerful television ad by his Democratic opponent, Hillary Clinton, asked voters to imagine how a Trump presidency might shape a child, the future of this country. The ad, called “Role Models,” showed close-ups of children gazing at TV screens broadcasting real footage of Trump making caustic remarks, some of them R-rated, on the campaign trail.

Not enough Americans batted an eye. As the father of two young boys of impressionable ages, I wish more had.

Four years ago, Trump pledged to stock his administration with “only the best and most serious people” and “top-of-the-line professionals,” then proceeded to open the White House doors to a parade of liars, opportunists, grifters, incompetents, and crooks — people devoid of character, people no one in their right mind would want their children to become.

There are a handful of people in his administration who maintained their character, mostly civil servant holdovers, like Dr. Anthony Fauci. How was he rewarded? The president impugned his character.
Leaders draw people like themselves into their orbits. Intellectuals attract intellectuals. Compassion begets compassion. Given that the president is a narcissistic boor peddling a paranoid vision of America detached from truth, is it any wonder that someone like Breitbart News founder Steve Bannon had a starring role in his administration and still has his ear?

Did the people who stood in line to vote early see that? I didn’t ask them for whom they voted, but rather why they felt compelled to vote early.

“I have been waiting four years to do this,” said Joanne Wexler, who spent about a half hour in line at Perinton Square Mall on a Sunday to cast her ballot.

Gary Peterson said he wanted his voice was heard. “The way things look, it will be a drastic change for our country and the world as we know it,” he said.

For Scott Andrews, he simply couldn’t wait to Election Day. “You look at Nov. 3 coming up and I’m so riled up, I just wanted to make sure I could get my vote in,” he said.

Arnold Condon, a 76-year-old Vietnam War veteran and former Rochester police officer, asked, only half-jokingly, “What if I die before Election Day?”

If that happened, chances are his family and friends would gather to celebrate his life and reflect on his character. In the end, it is our character that matters most.

My hope is that Americans will have had a change of heart about the importance of character in our nation, our president, and ourselves, and have done the right thing this election.

Winston Churchill was said to have once famously observed that Americans can always be trusted to do the right thing, after all other possibilities have been exhausted.