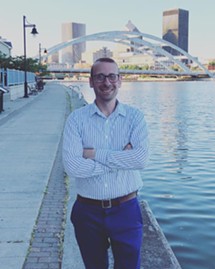 A third candidate has announced that he wants to be the Democratic candidate for the East District City Council seat, a position now held by Elaine Spaull.

Spaull announced earlier this month that she won't seek re-election, and this morning Bryce Miller, operations coordinator for Jaguar Land Rover Rochester, announced that he plans to run for her seat. The Monroe County Democratic Party starts reviewing candidates this month, and will hold its designating convention in February.

Miller is vice chair of the North Winton Village Neighborhood group and is president of North of East  Main Neighbors United. Activist Mary Lupien, who ran for an at-large Council seat in 2017, and attorney Michael Geraci are also seeking Spaull's seat.