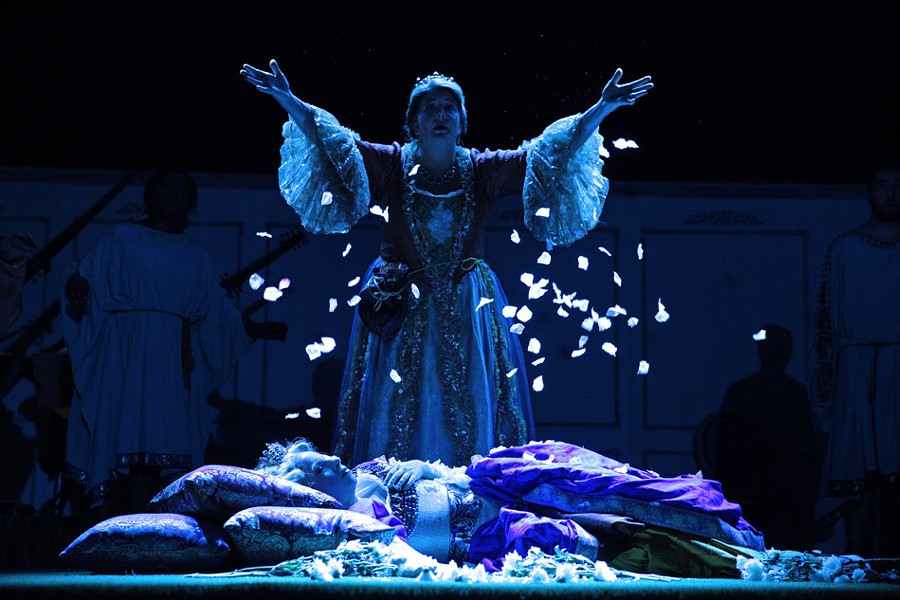 PHOTO BY JAMES MICHAEL Pegasus Early Music is staging its first opera, the 17th century "Dido and Aeneas," this weekend at the JCC's Hart Theater.

Pre-concert talk one hour before each performance

In the world of opera, good things often come in large, gaudily wrapped packages. Pegasus Early Music this weekend hopes to prove that small is good, operatically speaking, with a production of Henry Purcell's "Dido and Aeneas." The opera will run this Thursday, Saturday, and Sunday at the Jewish Community Center's Hart Theater.

"It's been kind of a dream," says Pegasus Artistic Director Deborah Fox of the group's first venture into opera. Fox is not only the show's producer, but she'll also play the lute in the orchestra — as she has for many baroque operas, including six previous productions of "Dido and Aeneas."

"Many baroque operas are actually not far removed from what we do in Pegasus," she says; the ensemble's programs often include singers performing cantatas, madrigals, and other works for several voices, sung in an improvisatory style and accompanied by a small instrumental ensemble.

The short-lived Henry Purcell (born in 1659 and died 1695) has always been revered as one of the greatest English composers. He wrote music for many plays and other stage works, but "Dido and Aeneas" is his only real opera (that is, sung throughout) — and it's only an hour long.

Just in case you haven't reread Virgil's "Aeneid" recently, the opera is based on its fourth book, in which Dido, the Queen of Carthage (now Tunisia) is seduced and abandoned by the Trojan warrior Aeneas. The opera's librettist, Nahum Tate, made one significant change to Virgil: he adds a trio of Witches, who have it in for Dido and who compel Aeneas to leave her. After taking his pleasure in Carthage, Aeneas moves on to Rome, leaving the grief-stricken Dido to commit suicide.

"Dido and Aeneas" is "very modern in a way," Fox says. "The transitions are super fast and it covers the gamut of emotions in a short period, from huge tragic moments to absolute comedy."

Purcell's music runs the gamut as well, Music Director Michael Beattie explains. "The late 17th century was an extraordinary period of European stylistic cross-pollination," he says. "In England, there was a special interest in French dance music and anything Italian. At the same time, English church music and song traditions had a huge influence on Purcell's music. So perhaps that's the challenge: balancing this kind of crazy conglomeration of styles, so that Purcell's unique voice can be heard."

"Dido and Aeneas" calls for a large cast of characters, each of whom gets a bit of meaningful stage time, plus a fairly busy chorus. (This production has a chorus of eight people, with several from the Pegasus young artists program, Pegasus Rising). The opera moves at a fast clip, but all the parts are well proportioned, from the tiny overture to Dido's death and the final chorus, which is so full of emotion that it seems like a huge finale — but it's only about five minutes long.

"What I find most modern about the work," says Stage Director Andrew Eggert, "is the compelling psychology of the two central protagonists. The innermost thoughts and feelings of the lovers Dido and Aeneas feel just as fresh and immediate to audiences today as they did well over 300 years ago."

Fox describes the show as "a period production with modern touches." Eggert, who has also directed works of Monteverdi, Cavalli, Handel, and Charpentier, says that this "Dido and Aeneas" is influenced by late 17th century art and architecture.

"The scenic design is a lavish period room interior, and as the audience comes into the theater, we want them to feel like guests in a baroque world where the spectacle will unfold," he says. "This unit set is transformed with a variety of magical scenic and lighting elements to become all of the different locations of the story."

Beattie and Eggert are also experienced in contemporary opera, as are some of the cast members, including mezzo-soprano Virginia Warnken, who will portray Dido. Fox thinks that contemporary and baroque music attract the same kind of musicians. "Both call for an extremely flexible voice and an ability to produce specific sounds and effects, along with an ability to improvise," she says. "They offer the same intellectual challenges and require a curiosity and willingness to try new things."

Because of the brevity of "Dido and Aeneas," it will be preceded by a selection of vocal works by Purcell, ending with a number titled "This Poet Sings the Trojan Wars." The events in the opera precede the Trojan War by several years, but the song (sung by the production's Aeneas, bass Jesse Blumberg) is still "the perfect lead-in to the story of Dido and Aeneas," Fox says.

"'Dido' is certainly the first great English opera; perhaps no one has set the English language more beautifully," Beattie says. "It is as rich in emotional scope and accessibility as any opera ever written, whatever its length."