They call him 'The Daffodil Man' of Mount Hope Cemetery 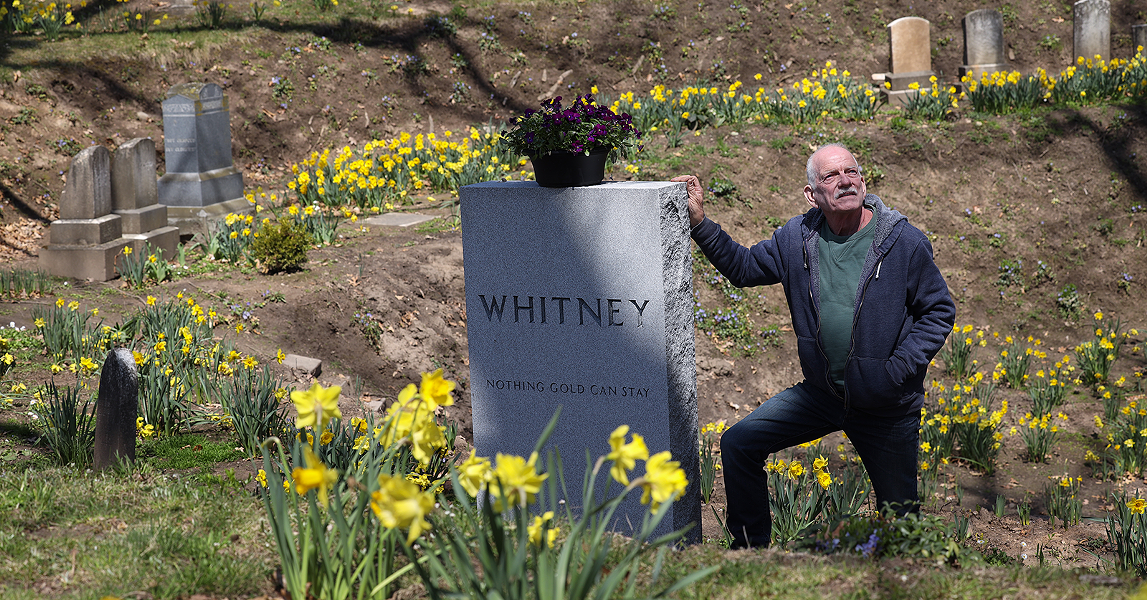 The phrase is of course the title of the famous poem in which Robert Frost evoked the changing seasons as a metaphor for the fleeting nature of all that is beautiful, pure, and precious.

But to see the landscaping the Whitneys have done around what will be their final resting place, in a circular recessed area of the cemetery known as “The Kettle,” is to wonder whether the couple is trying to put the metaphor to the test.

Over the last three years, Bill has overseen the planting of some 15,000 daffodil bulbs, by his estimation and that of others, cultivating an Instagrammable halo of gold that rings their plot and those of its departed neighbors for a few precious weeks in the late spring. 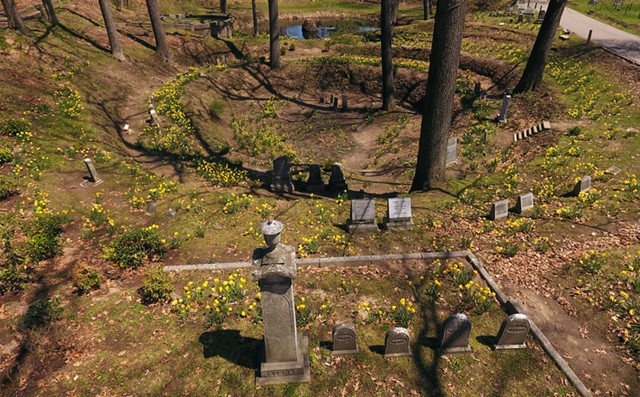 “I want to go everywhere,” Bill said of his daffodils, pointing an outstretched arm toward the horizon of the 196-acre cemetery. “I mean, I can’t get enough bulbs.”

The project belongs to the couple, but it is really Bill’s baby. He is a landscape architect by profession who built and maintained gardens for residences and businesses in and around Boston early in his career, and has been doing the same in the Rochester area for the last quarter century through his company, Whitney Designs.

Bill, 72, took his inspiration from the time he spent as a younger man gardening in Nantucket. The Cape Cod town explodes with daffodils each year and celebrates the irrepressible beacon of spring with even more zeal than Rochester does its lilacs. Indeed, he dreams of hosting a daffodil celebration.

“What I’m hoping is that we’ll be doing a Daffodil Weekend here at Mount Hope and people will come to see the daffodils, and that’ll tie right into the Lilac Festival,” Bill said.

The daffodil has been called the self-cleaning oven of gardens. They need almost no care and they reproduce like rabbits. Even the most cursed greenthumbs can plunge a daffodil bulb into 4- to 6-inches of soil in the fall, cover it up, and find a flower come spring.

Most bulbs produce one to three stems in their first bloom. But they multiply in consecutive years, and a mature bulb can produce as many as 20 flowers perennially.

It should perhaps come as no surprise that a plant so intoxicated with itself bears the botanical name “narcissus,” after the handsome boy of Greek mythology who was so taken by his own reflection that he pined after it until he died. Bill’s love affair with the daffodil is decidedly less destructive. But he acknowledged that his devotion to the plant and its proliferation throughout the cemetery is an obsession.

He said he is in his corner of the cemetery after work on most days and on weekends. If he isn’t planting daffodils, he’s planting ferns or other flowers, like anemones and rhododendrons, or raking leaves in the fall.

“I want this to become like a little fantasy,” he said of his surroundings.

Much of his time, though, has been spent restoring the walls of the “The Kettle” to meet the vision of the original designer of the cemetery, Silas Cornell.

The Kettle, a natural depression formed by glacial ice melt, was tiered in the early days of Mount Hope Cemetery in the 1840s. Over the decades, the layers eroded and, until Whitney assumed oversight of it four years ago, the walls had smoothened like a funnel. Today, The Kettle has three tiers, each of which is blanketed in daffodils and linked by concrete staircases. The Whitneys estimated they have spent upward of $5,200 on flowers and the stairs.

“I’ve been known as ‘The Daffodil Man,’ ‘The Keeper of the Kettle,’” Bill said with a laugh. “They have different names all over the place.”

The Whitneys are quick to point out, though, that they have had a lot of help along the way.

Most of the 15,000 daffodil bulbs were donated, they said, either by the city or nurseries. While Bill may be the primary workhorse of The Kettle, he has been assisted by dozens of volunteers, from members of the Friends of Mount Hope Cemetery to would-be Eagle Scouts and the McQuaid Jesuit High School football team.

“Bill’s enthusiasm is infectious,” said Patricia Corcoran, president of the Friends of Mount Hope Cemetery, a nonprofit organization that aims to restore and encourage the public use of the cemetery. The fruits of their labors in The Kettle moved the Friends of Mount Hope Cemetery to plant 1,000 daffodil bulbs last fall at the entrance of the cemetery’s main gate. They bloomed in April, and now, Corcoran said, they want to plant 5,000 more this year.

“That’s what Bill does,” she said. “He makes dreams not dreams anymore. They’re, ‘Hey, we can do this.’”

Bill was born in 1950 into a potato farming family in Lincoln, Maine, a small town about 60 miles west of the border with New Brunswick, Canada, and where the motto is “Come for the lakes, stay for the lifestyle.”

His mornings as a youth were spent cutting seed and preparing them for planting on his family’s 50-acre farm. His favorite part, he said, was seeing the potato plants flower. A potato field in bloom is a sight to behold. The uninitiated could be forgiven for being unable to imagine a plant so beautiful producing something so prosaic as a potato.

So glorious is the plant that the area celebrates it with an annual Maine Potato Blossom Festival, where it crowns a “Potato Blossom Queen,” who the locals call “Little Miss Potato.”

Neither the lakes nor the potato farming lifestyle was enough to keep Bill in Lincoln, though.

He got degrees in horticulture from the University of Maine and, later, landscape architecture from the Rhode Island School of Design, and set about his career.

While gardening on Cape Cod, he met Mykel, who hails from the Rochester area and described himself as having been Bill’s “assistant on and off for 30 years.” They married in 2005 in Provincetown, Mass., and live in Rochester. 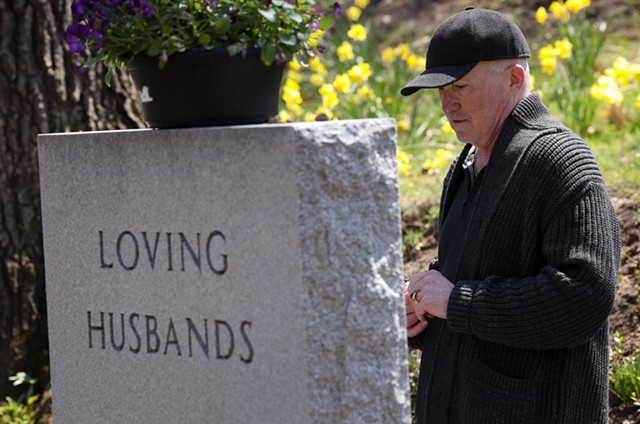 The couple said they bought their plot at Mount Hope Cemetery in 2018, after handling funeral arrangements for Bill’s mother prompted them to consider where they might rest in peace.

Although cemetery records show that more than 160 people have been buried in and around The Kettle, most of the deaths were so long ago that the area and the graves had become neglected.  But Bill saw its potential.

On their headstone, opposite Frost’s famous quote about beauty being ephemeral, are the Whitneys’ names and birth years under the inscription: “Loving Husbands.”

So can gold stay?

“Well,” said Bill, who is looking to plant another 5,000 daffodil bulbs this fall, “we’re going to keep trying to keep going here. Yes.”