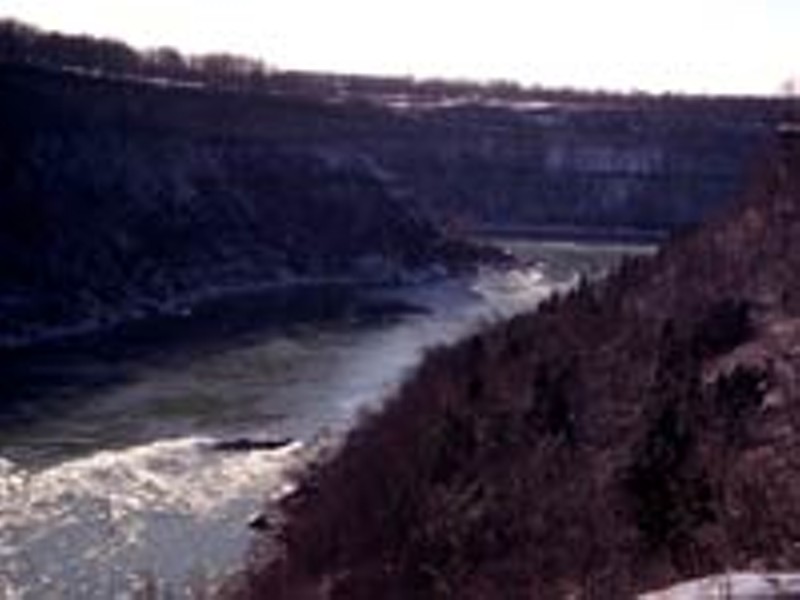 It's a little harder to find, but worth it: Niagra Glen has bouldering.

Okay, so Western New York may not be Bend or Boulder, or even Lake Placid. But for the precious few months that summer visits these parts, the discerning outdoor enthusiast can find plenty of challenges. If you know where to look, that is. Whether you're new to this area or just tired of hoofing it down the same old trails, here are a few hidden gems that you don't have to drive all day to reach. These destinations have enough variety to test the skills of the experienced adrenaline addict, but also give newbies a fun, easy entrée into climbing, biking, or backpacking.

To climb or not to climb

Real rock in the Niagara River Gorge. Let's face it. This part of the world will never be the climbing mecca that the Adirondacks or Shawangunks in the eastern part of the state are, let alone the more famous crags of Yosemite --- at least not in our geological epoch. But we're not wholly out of luck either. Those wanting to hone their climbing skills have at least one first class option: bouldering in Ontario's Niagara Glen Nature Area.

Bouldering is the hip younger cousin to conventional climbing, only achieving legitimacy as an activity in itself within the past decade or so. Instead of traditional longer-roped routes that take a mix of skills and endurance, boulderers pursue short, über-hard "problems" requiring both superb technical ability and the strength and flexibility of a gymnast, without the protection of a rope. (Since most of problems rarely get more than a few feet off the ground, this isn't as dangerous as it sounds.)

As the name implies, this usually takes places on large boulders, rather than imposing monolithic walls. In the case of the Niagara River Gorge, these 20- to 30-foot (or larger!) giants are mainly limestone, remnants of a bedrock layer that once capped the mighty falls. Now they're strewn haphazardly about on the floor of the gorge besides the turbulent post-falls Niagara River like abandoned toys in a child's room. The result is a fantastic landscape that's a fun short hike for anyone and doubly exciting for rock junkies.

There's a great variety of problems, ranging from unrated scrambles to V6s and V7s (boulders use a "V" system to rate a problem's difficulty). Be sure to bring a crash pad since uneven, rocky landings are par for the course. Leave your rope at home, though. A ban on roped climbs in the park has been in effect for several years.

Mountain bike bliss in Allegany State Park. There are plenty of good places to mountain bike in Western New York (almost none in Monroe County, but that's a subject for another story).

Few of these, though, compare with the variety you'll find at Allegany State Park. Maybe that's why the Western New York Mountain Bike Association holds their top annual race event --- the Raccoon Rally --- there each year. In fact, even non-bikers will be impressed by the terrain, which is among the wildest in the state; glaciers left it alone during the last ice age, so the landscape differs somewhat from the rest of the region.

Trails range from hilly to flat and there are wetlands, forests, and open meadows among the variety of environments. With 65,000 acres there's plenty of wild space for these trails to expand into, which means you won't exhaust the options in just a few rides. Still think you'll get bored? Where the park meets the Pennsylvania state line it becomes the Allegheny National Forest, a far larger wilderness which has plenty more of the same terrain.

The icing on the cake is a spin past the "Thunder Rocks," a clump of weirdly hewn conglomerate boulders so rare and otherworldly-looking that the chance to see them alone makes it worth the trip from Rochester.

For trail conditions and more information check out www.wnymba.org or www.nysparks.com.

A journey of a thousand miles...

Backpacking the Finger Lakes Trail. You probably didn't know that you could walk from the eastern edge of New York to North Dakota on a designated national trail.

Oh sure, everyone's heard of the Appalachian Trail, and maybe even the Pacific Crest and one or two others. But how many Rochesterians know that one of the nation's premier long distance trails runs practically through their backyard? Starting at the banks of Lake Champlain and winding westward to its terminus at Lake Sakakawea State Park in Pick City, North Dakota, the North Country National Scenic Trail is the nation's longest east-to-west trail. Right now, more than half of it runs along roads and other right-of-ways but when the remaining off-road portions are complete, it'll be the longest trail in the nation at over 4,000 miles.

South of Rochester its route follows the Finger Lakes Trail which itself follows a line connecting the southern tips of the Finger Lakes, through some of the best terrain the Southern Tier has to offer. With half a dozen spurs leaving the main trail between Syracuse and Buffalo --- the nearest is a 25-mile path connecting the FLT to Letchworth --- it's easy to plan anything from a day hike to an epic adventure.