There was treasure beneath the Marlite 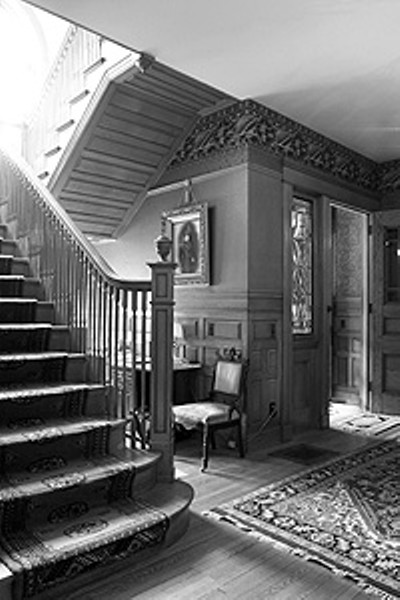 Kurt Brownell The Greasers uncovered miles of oak from beneath paint, Marlite, and dirt.

Even after all the work Philip and Harriette Greaser put into unearthing, stripping, and cleaning the woodwork in their house, they are very forgiving of the people who at one time tried to cover it. "It was the style," Philip says. "You just didn't want wood in the house."

The wood --- red birch in the kitchen, quartersawn oak all through the first floor, and cucumber wood on the second floor --- is the most noticeable characteristic of the house now. And though the house was built in the late Victorian period, the lines are clean and modern-looking. Burnished wainscoting, once covered with green Marlite, lines the entire first floor of the house. A wood paneled ceiling in the kitchen was uncovered from beneath acoustic tile. Paint and dirt were stripped off the wood from the rest of the house, and now it glows.

Harriette believes that she and her husband were just lucky to buy the house in modern times, when there are good tools and chemicals to cut the work. Without the aggressive wood cleaners she has today, she can understand why someone would just paint over kitchen woodwork and what must have been layers of coal soot.

"They had to clean London after they gave up coal," she says.

The 1893 house in Albion was designed by Andrew Jackson Warner, the architect who designed the 1873 Rochester City Hall, among other things. It was commissioned to be a manse for the adjacent Presbyterian church, and was used by the ministers and their families until the '60s. When the Greasers bought it about 17 years ago, it was being used as church offices, with a Head Start program upstairs, and a "a printing shop for somebody" in the basement, Philip says.

The Greasers, who were retiring and downsizing (from the 20-room, 1820-era house they owned previously), still wanted an old house, but one that didn't need major structural work.

"The house is plum," says Philip, "It was just tired." They had the plaster ceilings redone (after watching their brand-new paint job peel and curl in two days), they chose Victorian-era reproduction wallpapers to cover the rough, uneven walls, they brought in period light fixtures, and glued in some panels that had fallen out of the stairwell wainscoting. Masonry work was needed on the front porch. They replaced the roof and put up interior shutters that had been stowed in the basement. They replenished the soil in the garden --- which was ashy from the coal heat days, Philip guesses --- and built raised beds. Last year's tomato crop yielded 38 canned quarts.

The Greasers have a copy of a 1894 newspaper article written about the house, which made quite a buzz in its time. Not only was it a large, grand house, it was the first house in Albion to be all-electric.

"The write-up in the paper says it was probably the best Presbyterian manse this side of Albany," Philip says. He can only speculate that the parsonage was built so well and beautifully to reflect Albion's status and wealth in that time. "Albion was quite an early settlement," he says. "There were a lot of important people."

The house is still a wonder. The architecture is beautiful; the construction is solid; the period details add charm. An immaculate butler pantry gleams with shiny wood cabinets. The barrel-vaulted fruit cellar keeps potatoes and onions fresh through June. Speaking tubes --- early intercom systems made of tin pipe in the walls and mouthpieces in different rooms --- still work. They are not as helpful as they might have been with servants waiting on the other side, but according to Philip Harriette's piano students "are quite taken with it." And that counts for quite a lot.