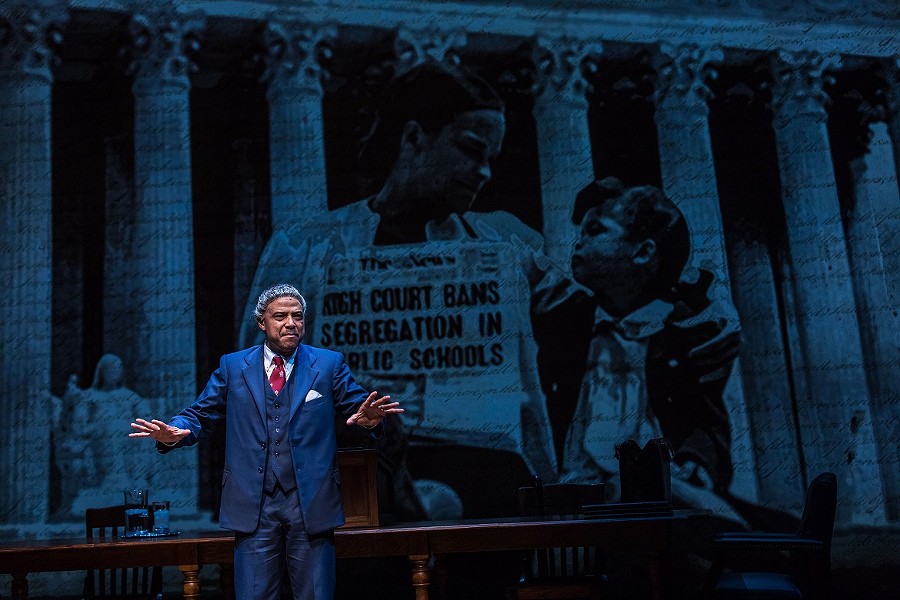 It's risky to program a solo show on the main stage of any theatre, but "Thurgood," which runs through November 18, is a calculated risk for Geva Theatre Center. It comes at a time of unrest in the country, amid discussions of race, the Supreme Court, and voting (the show runs through midterms -- a strategy, perhaps). Not to mention "Thurgood" is, at its core, a story of the American Dream.

The one-man show was conceived and written by George Stevens, Jr., founder of the American Film Institute and the producer of the Kennedy Center Honors, among other projects. "Thurgood" premiered in 2006 at the Westport Country Playhouse in Connecticut and starred James Earl Jones; when it opened Broadway two years later, Laurence Fishburne assumed the role.

The plot is essentially a chronological biography, recounted in first person, of Thurgood Marshall. It's an account of his life from his days as a child in Baltimore ("just north of the Smith & Wesson line," as he recalls), where he was a descendant of slaves; to his college years at Lincoln University, where he befriended author Langston Hughes. It was Hughes who influenced Marshall to join the debate team and become an activist, eventually resulting in his admission to Howard University School of Law. The second act of the show mainly focuses on Marshall's relocation to Washington, D.C. and his tenure as the first black man appointed to the Supreme Court (he was also founder of the NAACP Legal Defense and Educational Fund, and worked in New York for many years).

When Lester Purry (Thurgood) steps onstage, he commands attention immediately, breaking the fourth wall by addressing the audience with his booming voice. For the next two hours (including a 20-minute intermission), Purry is a theatrical force, bringing Thurgood Marshall to life through expert physicality, an impressively dense amount of memorized material, and a true commitment to the portrayal of an icon of American history.

Director Lou Bellamy has worked with Purry before, and the semblance of a strong artistic relationship is clear here. Bellamy is the founder and artistic director emeritus of Penumbra Theatre in St. Paul, which produced August Wilson's first professional production, and has produced Wilson's plays more than any other theatre in the world. Purry has contracted with Bellamy throughout several decades at Penumbra. In "Thurgood," the two have built a powerful ebb and flow, playing on the visual language to create a character that feels like both an inspiring college professor and the most interesting family member at Thanksgiving.

Set design by Vicki Smith is simple upon first glance -- a floor-to-ceiling Constitution backdrop and judge's chamber with conference table, chairs, lectern, and coatrack. But the backdrop quickly transforms to a screen, where Rasean Davonte Johnson's projection designs are featured, including historical film, photo stills, and a rainy night. Sound design by Justin Ellington plays an important role as well, as it is the only other auditory element aside from Purry's voice. Weather, music, old radio announcements, and recorded court cases all add depth to the production.

"Thurgood" is a show best enjoyed while alert (throw back an espresso beforehand), as it covers an entire life of events, is slow moving at times and contains weighty subject material. But it's also filled with lighthearted moments -- Marshall was known for his fun-loving, sometimes irreverent nature -- and pointed, necessary comments on race in America, ideal for a post-show discussion with fellow show attendees.