THEATER REVIEW: “The Tribute to Sir Elton John & Billy Joel: Through the Years”

"The Tribute to Sir Elton John & Billy Joel: Through the Years" 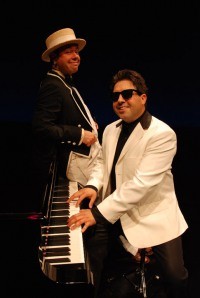 Tribute shows dedicated topopular musicians are nothing new -- I remember seeing "Beatlemania" when I was barely a teenager. The show currently on the Geva Mainstage, "The Tribute to Sir Elton John & Billy Joel: Through the Years," is something of a different animal. In it, the two performers bringing to life the music of the pop-rock legends of the title do not attempt to pass themselves off as the pianist-singers. They simply sing the hits of the piano men who inspired them, interspersed with some banter that references the performers' personalities more than the icons themselves. Because of that, the show actually feels more like a cover-band concert than a theatrical endeavor. Regardless, by the end of opening night, the crowd at Geva was eating it up, quite content to ignore any flaws and able to enjoy the night for what it was: accessible musical fun.

The show stars Rochester native David James, who handles the Billy Joel side of the equation, and Joel Mason, who tackles the catalogue of Sir Reginald Dwight, better known as Elton John. The two have extensive performance experience, with James -- a once and future student of the Eastman School of Music (he'll return to ESM this fall for an additional degree) -- having performed his Joel tribute in various hotels and cruise ships. It was on one of those cruises that he met Mason, who has similarly performed around the world with his Elton John act. The two decided to work together on a concert in honor of the two piano-playing rock stars, who notably worked together in their "Face 2 Face" tours in the 90's and early 2000's.

The format of "The Tribute" is simple. Sitting at two pianos on the Geva stage, the two men take turns on various classic Joel or John songs, sometimes sharing vocal duties, sometimes soloing, and in the case of guilty pleasure "Honky Cat," even getting into a little piano duel. They both play the piano and, when needed, backing tracks fill in the rest of the instruments. Most of these tracks are fine, but a few come dangerously close to elevator music -- "Philadelphia Freedom" was especially cheesy (admittedly, the source material is hopelessly dated).

As James and Mason perform, a projector screen on the back of the stage plays either background videos that wouldn't feel out of place at a Korean karaoke bar or archival footage of the original artists. It's oddly comforting to see videos like John's "I'm Still Standing," which is basically the distillation of every 80's music video ever, and Joel's "Uptown Girl," which still makes me giddy every time I watch Christie Brinkley take off her hat and unfurl her hair. When the duo shares the stage, they engage in a bit of shtick -- sometimes too much shtick -- and frequently goad the audience into participating with sing-alongs or claps.

That last point proved somewhat awkward at the beginning of the performance I attended. Prior to the two performers taking the stage, a brief trivia video implored the audience to go get more drinks before the show started, and later in the evening Mason made a crack about how nobody cared about what he sang so long as the drinks were flowing. That kind of banter makes sense in a cocktail lounge... but Geva ain't a cocktail lounge. And I think, at first, the audience may have felt a little awkward singing along even to familiar feel-good music in a space where it's used to seeing works like "A Raisin in the Sun" or "On Golden Pond." But by the end of the second act, the crowd was fully into the show, with unabashed sing-alongs and spontaneous dancing breaking out with at least one man seated toward the front of the theater.

The performers each bring something different to the show. James is the stronger singer and pianist, and his voice is well suited to the Joel catalogue. He is particularly good in the slower, more emotional ballads ("She's Always a Woman" and "Just the Way You Are"), although he also touches on something that the program points out is quintessentially Billy Joel: projecting an aura of toughness. Mason's gift comes from his ability to work a crowd. He has a boyish charm about him, and even when he was trying too hard, I found myself amused by his act. He also has quite the impressive John-inspired wardrobe, including one multi-colored fur outfit I'll call Muppet Armageddon and an all-white ensemble I can only describe as "from the Norma Desmond estate sale."

While it would be impossible for a two-hour show to cover all of the hits of pop legends like Joel or John, the nearly 30 songs selected should please fans of either artist, especially fans of their early periods (I don't think there's any music in the show from after 1990). It goes without saying that the songs themselves are all excellent examples of piano-based pop-rock, and James and Mason handle them capably. The show is a bit of an odd fit for the Geva space, and there's no denying that it could use some refining. But if you're a fan of pop music from the 70's and 80's and don't mind a bit of shameless pandering, it makes for an entertaining evening. (The drinks they kept mentioning couldn't hurt.)