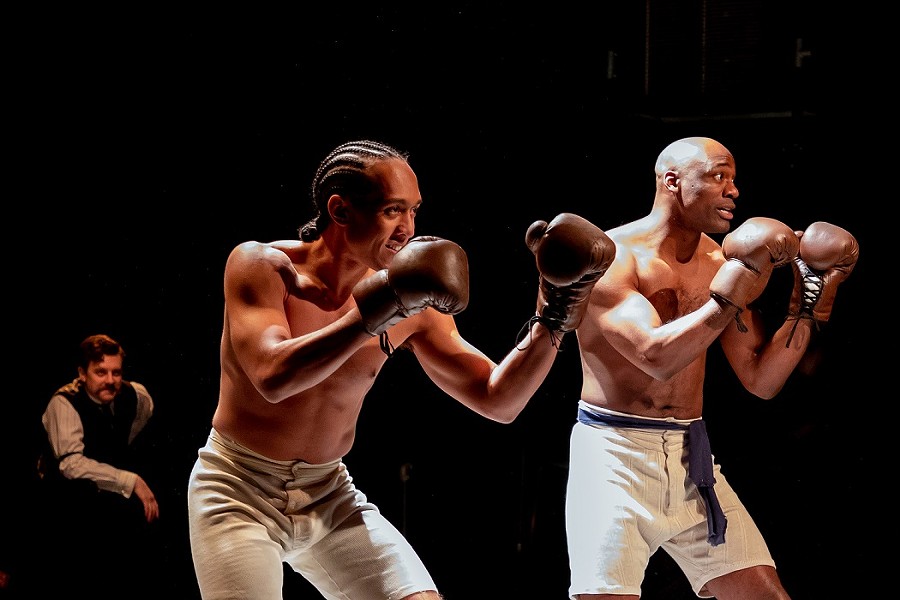 Once every few seasons, a riveting show materializes on the local docket. Sometimes, its fame precedes it -- "Hamilton," for instance -- but most other times, the show is still well under the radar and audiences get to discover it themselves.

"The Royale," which runs at Geva Theatre Center's Fielding Stage through April 28, is one such show. The play by award-winning writer Marco Ramirez ("Orange is the New Black," "Sons of Anarchy") opened off-Broadway in 2016 after runs in Los Angeles and London.

The plot is based on a true story, and follows Jay "The Sport" Jackson, a black boxer who wants to become the heavyweight champion of the world. Jackson challenges the current titleholder -- a white man -- to come out of retirement for the fight of the decade. But in racially-charged America circa 1905, this unheard-of event could have consequences.

The minimalist set design by Seth Reiser places audience members ringside for this fast-paced, 70-minute drama. An intimate cast of five, directed by Pirronne Yousefzadeh, has a palpable chemistry that keeps each scene sparking with energy and suspense. (Throughout the show, many members of the audience were literally leaning forward, on the edge of their seats.)

In the role of Jackson, Jamal James (also seen in the national tour of "The Color Purple" and TV's "Gotham") is a towering force onstage. His character requires tightly wound, controlled focus tempered with a bit of playful humor, and James is as charming as he is awe-inspiring. Costume designer Sarafina Bush has created rich, period-appropriate garb for the cast, but James's primary costume is a simple pair of white boxing shorts. Both he and DazMann Still (TV's "Bull," "The Last O.G.") are in impeccable shape, and perform boxing feats throughout the show's duration. Still, who is a Rochester native, is the youngest in the cast but holds his own as sweet-natured boxing apprentice Fish.

The staging of the fights in "The Royale" is particularly interesting. There's no actual boxing -- some sparring -- but rather, Movement Coordinator Rocio Mendez has created an impressive, intricate dance of foot stomps, handclaps, physical movement, lighting (also designed, and impeccably so, by Reiser) and sound (flawlessly designed by Chris Lane).

In the role of Jackson's promoter, Max, Sean Meehan (CBS's "Elementary," "The Good Wife") is equal parts salesman and circus ringmaster, wheeling and dealing Jackson to fame and glory. But Meehan keeps a soft edge to the character, and doesn't miss a beat with his many quips and one-liners. As Jackson's manager Wynton, Alexander Thomas (who played the same role in the Toronto production) delivers a quietly firm character that centers Jackson's rocketing emotions. Rounding out the cast is Lisa Tharps (Broadway's "King Headley," TV's "Elementary") as Jackson's sister, Nina. Though Tharps joins the show only in the second half, she makes up for lost time with a poignant and electrifying performance.

"The Royale" is Geva's sixth co-production with Ithaca's Kitchen Theatre, and played there March 1 through 31 with the same cast and crew. Yousefzadeh is Geva's recently hired Associate Artistic Director and Director of Engagement, and directed last year's "Heartland" and 2017's "Lake Effect." She comes to Rochester from New York City and has directed around the country at The Public, Actors Theatre of Louisville, La Jolla Playhouse, Cleveland Play House, and many others.

The addition of a non-Rochester native -- and a woman -- to the Geva managing artistic staff is an exciting development, and if the power of "The Royale" is any indication, Yousefzadeh has greatness in store for Rochester audiences.