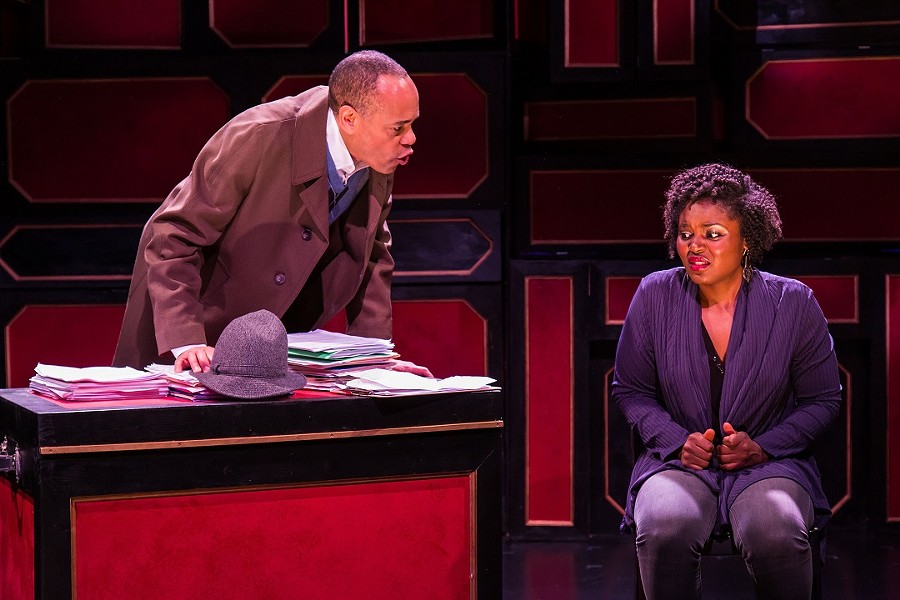 Continuing a movement of both new plays and female-focused works this season, Geva Theatre Center presents the world premiere of "The Magician's Daughter" by Lila Rose Kaplan, a 30-something playwright whose works highlight women's issues. Kaplan has penned a semi-autobiographical tale about a daughter's relationship with her high-functioning addict father. But even for the fortunate audience members who do not relate to a family member with addiction, this remains a play for everyone who's ever had a father or daughter.

"The Magician's Daughter" begins as a show-within-a-show. The magician, Prospero (Tyrone Mitchell Henderson), and his daughter, Miranda (Brittany Bellizeare), are getting ready to perform their magic act for the audience when Miranda (immediately breaking the fourth wall) announces to everyone she's going to quit the act. (And if those names ring a bell, think Shakespeare's "The Tempest.").

The show runs just about 90 minutes without an intermission, and Bellizeare and Henderson are the only cast members. While Bellizeare functions as a sole character throughout, Henderson takes on multiple roles (the most entertaining being "Black Pearl"). Miranda's quest to find herself repeatedly reminds her of Prospero, or, as she refers to him, the "gravitational constant."

Bellizeare handles Miranda's complicated persona with aplomb, leading the show's energy from opening curtain but deferring to Henderson as the roles shift halfway through. She captures exquisitely the angst of a young 20-something coupled with the too-soon maturity of a child who's witnessed addiction in a parental figure. Henderson's performance is deceptive at first; just a ripple in Bellizeare's wake. When he pivots to a reinterpreted version of Prospero later in the show, Henderson hits a stride, fully embracing -- and executing -- the difficult nuances of his role with care.

The impressive set, prop, and costume design is by Geva Theatre Center staff. Scenic designer Sara Walsh has transformed the Fielding Stage into a magic trick itself: rain falls from the rafters and dozens of stacked boxes open to reveal props and costume pieces. Lex Liang's costume design provides swift changes for the characters when they can't leave stage, and Michael Weber's magic and illusion design keeps the audience entranced throughout.

"The Magician's Daughter" is a classic coming-of-age story with a young heroine at the center, a refreshing take in a world where we "don't hear enough from young women, and we hear too much from old men," as Miranda says. Equally refreshing is the casting, which features actors of color in the two roles. The director, Shelley Butler; assistant to the director, college student Michelle Garrett; and Geva's in-house dramaturg, Jenni Werner bring up the female ratio even further.

As Prospero chastises Miranda later in the show, you "need to decide if this is a poem, a play, or a novel." While that may be Kaplan acknowledging the narrative gets a little windy, she's taken an almost Shakespearean-meets-Kafka approach to the hero's journey. Halfway through the show, there's a decided shift in the character development as Prospero addresses the audience directly for the first time since the play's opening scene, and the dialogue between the two characters shifts to a Beckett-like rhythm. Here, the emotion is highest and the recounted trauma most exhausting. But at the heart of "The Magician's Daughter" is a metamorphosis: the arc of a parent-child relationship, and the shifting identities that come during that journey.