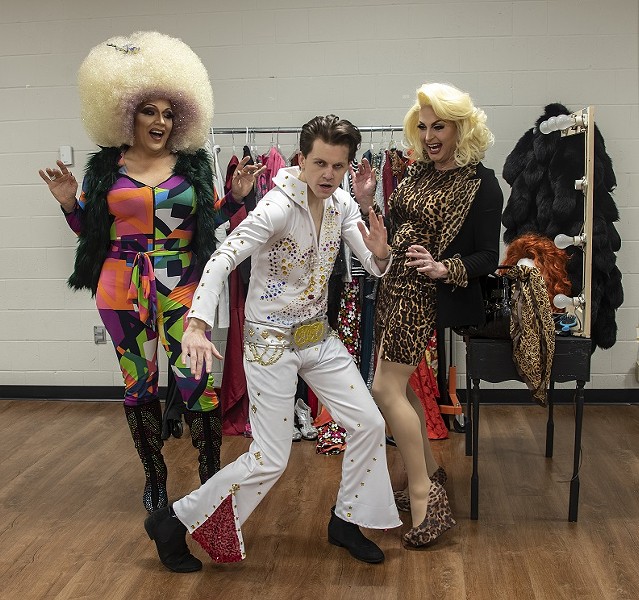 PHOTO BY STEVEN LEVINSON From left to right: Mrs. Kasha Davis, Kevin Plinzke, and Aggy Dune in "The Legend of Georgia McBride."

"The Legend of Georgia McBride"

Theatrical productions aren't generally written about Florida. The Sunshine State, with its gators and gulf coast, doesn't set the stage for a production in quite the same way a cosmopolitan city or the Midwest does. But for Matthew Lopez's 2015 play "The Legend of Georgia McBride," a small town Florida setting somehow works perfectly.

The plot focuses on Casey, a 20-something Elvis impersonator who's been playing The King for a nearly-empty bar on weekends. When he finds out his wife is pregnant and his act is being replaced by a drag queen duo, Casey decides to stay on as a bartender so he's not out of work. Instead, he finds himself thrown into the act when one of the queens can't perform, and Georgia McBride is born.

The play was commissioned by The Old Globe in San Diego and developed at the Denver Center Theatre Company before opening off-Broadway at the MCC Theater in 2015. It ran for a month as a NY Times Critic's Pick, and reviewer Charles Isherwood called it "typically first-rate." (Local audiences may remember Lopez's Civil War-era drama, "The Whipping Man," which played at Geva Theatre Center in 2013.)

Smalley embodies a warm, empathetic Mills, who steals many a scene with not only personality but also lip-syncing numbers (Aggy Dune as Tracy Mills as Liza Minelli, in particular, is a show stopper). Popil, a "RuPaul's Drag Race" alum who just came off a sold-out run as Dr. Frank 'N' Furter in Blackfriars Theatre's "Rocky Horror Picture Show," has a smaller role as the unreliable Rexy, but still demonstrates a diva-level takeover of each scene.

Kevin Plinzke, a SUNY Brockport theatre grad who was last seen in David Andreatta's "Fielder's Choice" at Rochester Fringe this fall, portrays drag trainee Casey. Plinzke is not a singer, so lip-syncing is an excellent fit. But he's more convincing as doting husband to Jo (recent Nazareth College alum Abby Prem, who keeps up with this older cast impeccably) than he is as a successful drag queen. Still, he's charming as the bumbling Southern boy, and that's enough to pull off the role.

Rounding out the cast are Nazareth College professor and local performer Matt Ames as simpleton landlord and friend Jason; and D. Scott Adams (last seen at CenterStage in "The Flick"), who plays the down-on-his-luck, conniving club owner Eddie. David Runzo, who last directed "Buyer & Cellar" at CenterStage, guides the cast in what is, overall, a lighthearted two hours (including a 15-minute intermission).

But it's not all tropes and laughs. Lopez works in important themes of partnership (both showbiz and marriage), discrimination, perseverance, and career passion throughout, making "The Legend of Georgia McBride" a production that's both a fun night out and worthy fodder for conversation afterward.