The plot follows the Blake family on Thanksgiving 2013, as three generations gather in youngest daughter Brigid's Chinatown duplex. Brigid's parents and grandmother have driven in from blue collar Scranton, Pennsylvania for the day, and her lawyer sister Aimee has taken the train in from Philadelphia. Also joining the family gathering is Brigid's roommate and boyfriend, Richard.

Each scene could be plucked from any family gathering, at first filled with warmth and reunion. But as with any family function, there's soon an elephant in each room of the tiny duplex. Middle class Irish parents Erik (Skip Greer) and Dierdre (Toni DiBueno) have raised their daughters Catholic, and Dierdre, especially, struggles with the fact that her adult children have abandoned the faith. Erik's mother and matriarch of the family, Fiona "Momo" (Susanne Marley), is present as well, but she's battling dementia and drifts in and out of consciousness. Aimee (Madeleine Lambert) has just broken up with her longtime girlfriend and has contracted an intestinal illness, and Brigid (Regan Moro) is an unemployed musician who's currently bartending. Her boyfriend, Richard (ThamerJendoubi) is working on a graduate degree at age 38. 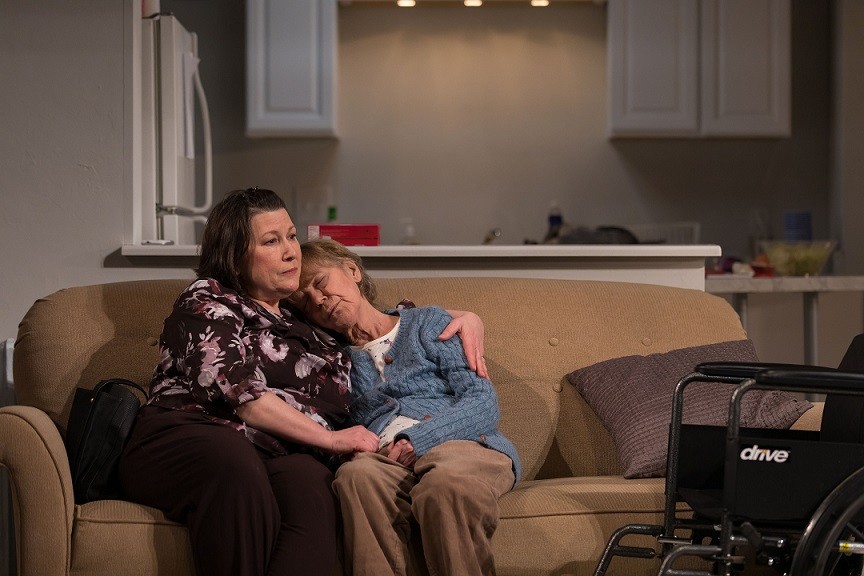 The issues raised in "The Humans" are reminiscent of conversations every family has at some point -- financial, age, health, careers -- and director Mark Cuddy guides the ensemble's chemistry in such an authentic way that it's easy to forget there isn't a real family onstage. Greer, who is also an artist-in-residence and director of education at Geva Theatre, gives the performance of his career in the role of a loving-yet-haunted father. Opposite him, DiBuono impressively embodies every doting mother on earth, from sending care packages and forwarding emails and giving the latest "bad news" updates from back home in Scranton. As dementia-suffering Momo, Marley is truly brilliant, teetering between mumblings and anger outbursts. (She also covered and played the role on Broadway.)

As eldest daughter Aimee, Lambert portrays a complex character who's trying to stay strong for her family as her personal life falls apart. (Lambert's last role at Geva was as Susan B. Anthony in "The Agitators," and this performance truly highlights her artistic range.) Moro, a Geva newcomer, plays the carefree younger daughter of the family. She's excited to show her parents the new-to-her duplex apartment, but isn't quite cut out to play host yet. As Brigid's older boyfriend, Jendoubi bestows a calming presence throughout the show, and captures the essence of being an outsider at a family gathering.

The sets, costumes, and props were all produced by Geva staff, which speaks to the level of creative excellence coming out of the city's regional professional theater. A two-story set design by Tim Mackabee provides an always interesting, flowing backdrop for the play's many character interactions. Costume design by Christina Selian succinctly captures each personality. Dramaturg Becca Poccia Hays has also written insightful program notes that should not be skipped.

Cuddy and the cast create moments throughout "The Humans" that will undoubtedly make audience members laugh and ache thinking of their own family units. Packed with powerful acting, unexpected plot twists, and poignant moments, "The Humans" is, without a doubt, the show to see this season.