A beautiful revival of a modern American classic

With "The Hot L Baltimore," Blackfriars brings back an important play by an important American playwright, and does justice to an elusive piece. Lanford Wilson died in 2011, and his reputation seems to be undergoing that slight posthumous dip that many artists undergo. But I think he'll eventually rate very high among American playwrights for a string of plays he produced in the 1980's, including "The Fifth of July," "Talley's Folley," and "Burn This." And then there is the most famous of them all, or at least the most famous title of them all: "The Hot L Baltimore."

The play was a great success in the early 70's: the original Off-Broadway production ran for more than 1,000 performances, and it must surely be one of the very few plays to become a sitcom (which was considerably less successful). If "The Hot L Baltimore" is not performed very much, it is not because of the play's quality. Probably it's because it has no fewer than 14 leading parts, some of them very demanding, and it calls for a big, elaborate set -- not to mention a director who can weave it all together. I'm happy to say that Blackfriars provides all of the above. 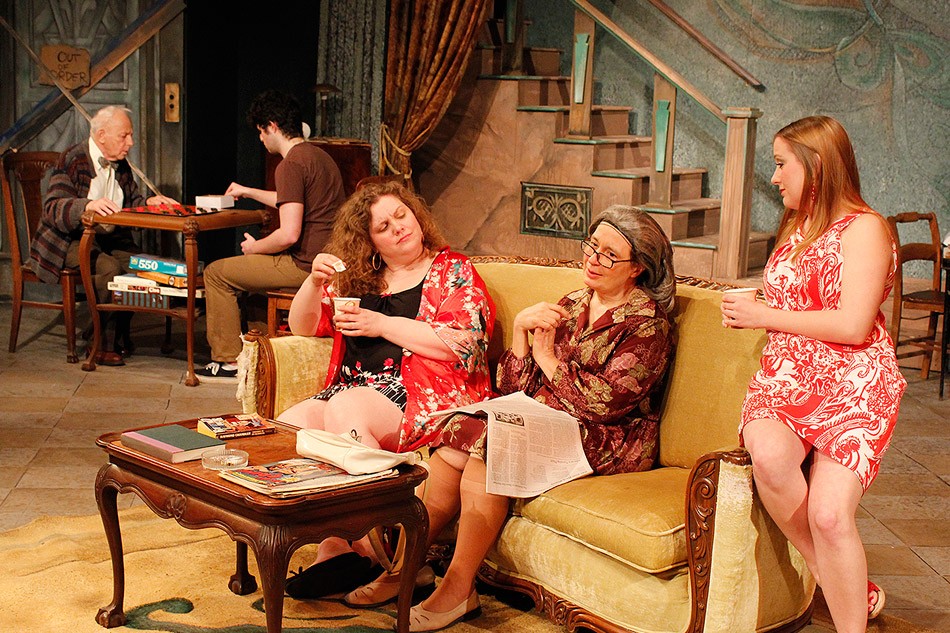 Wilson crafted a very interesting play that I guess you could call a mood piece: nothing much seems to happen in it, yet it turns out to be about any number of important things. It's a portrait gallery of the inhabitants of a once-elegant hotel from the 1930's, which is in fact condemned and facing the wrecker's ball. (The play's title reflects the missing "e" in the hotel's sign.) The building's residents come and go in the lobby, telling important and unimportant things about themselves.

To choose at random, there is a gentle elderly lady given to reminiscences (Vicki Casarett); a noisy elderly gentleman who reminisces about nothing, spending most of his time complaining (Richard Mancini); a varied trio of prostitutes who ply their trade in their rooms and talk about it in the lobby (Mandy Hassett, Stephanie Roosa, Alexa Scott); and a forceful young girl (Marcy Savastano) plotting to get out of Baltimore and travel west with her shy, stammering brother (Devin O'Connell). There is also a young man (Jimmy Boorum) trying to find out what has happened to his grandfather, who lived in the hotel, and a woman (Dawn M. Sargent) whose son lives there and who spends much of the play walking back and forth removing his belongings. And there's also a put-upon hotel staff (Jeff Siuda, Morey Fazzi, Janine Mercandetti).

Wilson presents these characters with great empathy, and balances and interweaves their stories with great skill, but he has more on his mind than presenting a stage full of (mostly) loveable losers. "The Hot L Baltimore" was written in the era of Watergate and the end of the Vietnam War. The once-great hotel in decline is pretty clearly a stand-in for a once-great nation in decline, and many of the characters' speeches refer to better times gone by. ("The Hot L Baltimore" takes place in a single day -- significantly, it's Memorial Day.)

By the end of the play, a few characters have escaped, some are planning to escape, and a few are dancing their worries away. This play may be 40 years old, but it doesn't really seem dated at all. "The whole damn country's double parked!" shouts a character as she is making her way out of the hotel near the end -- and several decades later, the meter's still running.

The whole production has the wonderful sense of unity that comes from a cast and an artistic staff working in sync. Under David Runzo's direction, a play that could easily meander seems perfectly paced and balanced, with a constant underlying energy. Individual performances are vividly characterized, but they also support each other in a real ensemble. John Haldoupis has designed a beautiful, wonderfully detailed playing space, where shabby reality bumps up against faded art-deco glamor.

I should add that "The Hot L Baltimore" contains some rough language, not to mention a brief flash (as it were) of female nudity, but I wouldn't let that stop me from seeing one of the most beautifully presented plays I've seen at Blackfriars.